When you’ve got the time, watch this video.

Actually, I mean hurry and watch it. I have no doubt that Canadian and American liberals and others in the progressive left are hobbled away somewhere, even as you read this, possibly in some corner of their nation (Cuba  —  or even right here in Canada or America where they live), trying to drum up a way of state-sponsored “regulating” the internet. Particularly its conservative web sites. As in the rest of our erstwhile free world, they must seek state-sponsored ways of engineering the ‘net such that conservatives like me who get in their way  —  who criticize liberals and progressive government and their growing laws, rules, regulations, and public policies; or which in some other way offend their progressive world view which requires their careful control and expert engineering, are summarily shut up. So watch it now. Quick.

For those viewing this on an iPad or iPhone (etc) and can’t view Flash video, here’s a link instead so you can check it out on your desktop or laptop: http://bcove.me/h2mkivu4.

It’s particularly galling that they  —  those unqualified, unelected, self-appointed liberals and progressive-leftists who always dominate these things (just like their brethren in those hideous Canadian government-mandated “human rights” commissions all across Canada)  —  dictate, in quasi-official “rulings,” decided after closed-door star chamber-like meetings, that a person and/or organization express “apology” and “regret” for something. They dictate an emotion. And they dictate that people feel the way they’re instructed, by them, to feel. And they order them to think a certain way. The way they think. In this case, about something that they find offensive. So Chinga tu Madre, progressives. Take it to Cuba where it belongs. 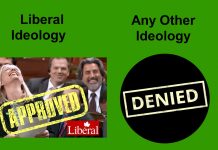