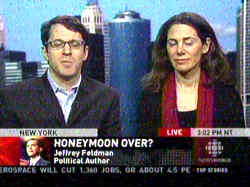 For the 8,000th time, the CBC has engaged, and then tried pass off as totally neutral and objective and fair and balanced and oh so unaffiliated with any Democratic Party or far-left blogs, two far-leftists and Democratic Party workers and activists and agitprops —to inform Canadians about politics.

And as usual. Jeffrey Feldman was introduced and passed off only as a “political author”, and Rachel Sklar as an “editor”.

This time, it appears this little bit of political theater on the CBC (support the arts!) was to help rehabilitate the already tarnishing image of their leftist hero and Messiah, President Barack Obama, and his already faltering administration, in what I think must be a historically short “honeymoon” period for any U.S. President.

And what do you know, the “apolitical” team, upon sufficient goading by news anchor Suhana Meharchand, opined by saying things sort of like yeah, he’s been marvelous, what with his refreshing ability and guts to stand up and admit he’s goofed up already!… And ya know he signed that equal pay for women thing!  … And what’s with the media ganging up on him?! … Hope! Change! Go Barack!  Go team!…  Etc.

It was actually so funny (in that this is like watching the TV version of the far-left DAILY KOS or HUFFINGTON POST kind of way), I actually laughed out loud.

When asked by team member and CBC anchor Suhana Meharchand how Rush Limbaugh might be getting in the way of their progress, team member Rachel Sklar sputtered out something like yup, he sure is, and it proves how popular Obama is!  And for good measure, Rachel Sklar said something about ignoring Ann Coulter and how, as in Coulter’s case, we all should “just ignore him and hopefully he’ll go away”.

And the anchor Suhana Meharchand replied affirmatively, “mm hmm”, left it at that, and it was over.

I hope Canadians don’t ignore Ann Coulter since I pay a lot of money for her column at my Canadian politics web site called ProudToBeCanadian to compete against the far-left propaganda being put out by the CBC and its expert objective “analysts” like Sklar and Feldman, and I really value Ann Coulter’s opinion, and I think Canadians would really benefit from it as well.  Of course I also wish the Canadian government—and propaganda branches of it like the CBC—didn’t compete against me in this way, especially with my money.  Because after all, what kind of government competes against its own citizens for profits and in the forum of ideas—particularly political ideas?

I also think state-owned and state-funded media should be banned in this country, and that notion should be enshrined in our constitution.

Previous article
Words matter. Barack said so! So why doesn’t the CBC care about words?
Next article
The Futility of Hybrid Cars