Words matter. Barack said so! So why doesn’t the CBC care about words? 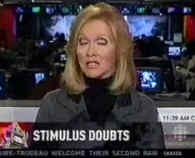 At 9:39 AM PT (or so), CBC Newsworld anchor Nancy (“very interesting!”) Wilson reported to Canadians that this morning, the parliamentary budget officer Kevin Page told a parliamentary finance committee this:

Who said the recession will last four years?  The finance minister said that?  He might have said the deficit would last four or five years, but not the recession.  The Conference Board of Canada even said things will turn around by July of THIS YEAR, and growth will be much better next year.

CTV.ca reports that in this respect, Page only claimed that “Ottawa may remain in deficit longer than four years”.  The Globe and Mail reports that he told the committee, “”There is … a significant risk that the government’s budgetary balance will not return to a surplus position by 2013-2014.”  The Montreal Gazette previously reported that “Flaherty’s calculation is that the recession will be steep but short, with the economy pulling out of it, after only three quarters of negative growth, in the second half of this year.”  But I don’t know anyone in the government who said the recession would last four years.  The deficit?  Maybe.  They said five, actually.  But not the recession.

The CBC and others in the far-left might wish that the recession would last four years, for several reasons, but especially because as even leftists like Liberal premier of Ontario Dalton McGuinty acknowledge, the recession will be long over before any of the phony government “stimulus” plan (also known by those of us in the intellectually honest and conservative set as “the socialist spending and social engineering and liberal-left agenda-driving plan”), and its countless billions in taxpayer cash will actually stimulate or fund anything, and certainly not before the recession has already sorted itself out.  For example McGuinty actually said we “don’t want the recession to be over by the time we get infrastructure dollars spent”.

Accidentally reporting to the nation (as in, whoops—golly!  Did I say that?) that the finance minister of Canada said that the recession will last four years would help justify—in liberal-left minds only—the liberal-left’s phony “stimulus” agenda.

UPDATE:
The new anchor shift has started, and Suhana Meharchand changed it up a little, saying ”…[H]e doubts Jim Flaherty’s prediction about the SPEED of economic recovery.”

I wonder how many people previously heard that the finance minister said the recession will last four years?  Oh well who gives a rat’s butt, huh?  It’s just the economy and recession and families and life!  No correction necessary!  This is the CBC!