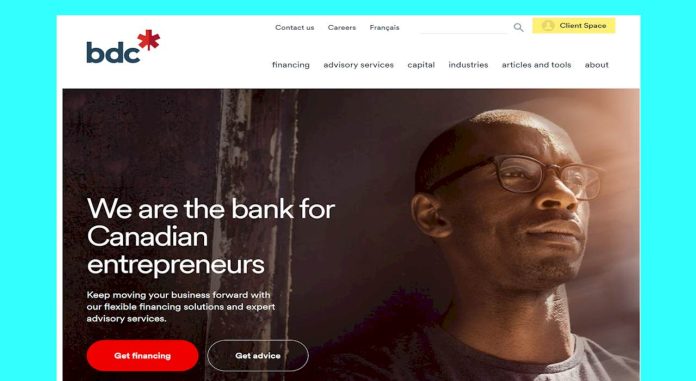 I think Pierre Poilievre is missing the bigger point. 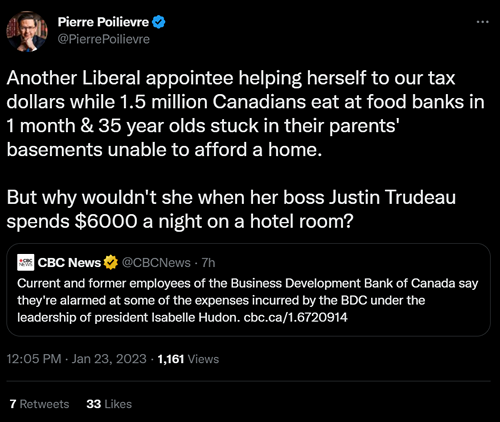 As a conservative, or any normal human, a crown corporation boss flying her personal chauffeur across the country so he’d be there to drive her around when she gets flown there herself, is beyond parody. No let me start again. It’s exactly on par in Canada today. These government [insert swearwords] waste our money. And they treat themselves like they’re special. Better than you. More entitled. Like they’re royalty.

But maybe Poilievre is like me and he’s overwhelmed by all the perfidy and scandal he comes across every day, and is simply batting off one at a time. Because as I see it, an issue at least as big as the profligacy of this Big Government behemoth — the so-called Business Development Bank (abbreviated to “BDC” for some special reason having nothing to do with English or sense, because Canada!)  — is that it wants to grow by another 300%.

See if this passage in the news report that Poilievre points to makes your ears perk up:

“According to a confidential document obtained by Radio-Canada, the BDC wants to roughly triple the size of its pool of entrepreneur clients  — from 73,000 to 230,000 — in 10 years. It’s also looking to boost the value of its current portfolio from $38 billion to $95 billion.”

They — the government — have 73,000 “entrepreneur clients” already now? What fraction of the number of businesses in Canada is that? A pretty large one, I suspect. And they want to boost that to 230,000 — so… capture an even greater percentage of new small or medium-sized businesses in Canada to become additional “clients” of the benevolent government?  How are your ears?

It sounds like the train has gone off the rails.

Already, big business is in thrall to big government (and vice-versa — it’s very cozy in that bed).

And why aren’t the banks in Canada against this Big Government intrusion into what should be their marketplace? Because the government gets the money it loans to entrepreneurs from the banks, clearly pays them interest, and backstops the loans. See? Cozy!

To be fair, it could be that I simply don’t trust this progressive government’s motives. To be super fair, I’d be right to not trust their motives. Enlisting more and more small and medium-sized businesses in the Liberals’ sponsorship club sounds a little like how Trudeau’s Liberals have restructured the Canadian “news” media, what with all their taxpayer handouts and “supports” and “sponsorships,” rendering them as “clients” of the state. (And whaddya know — few complaints from the “news” media about anything the government does! Or even many serious questions!)

Speaking of China, the article goes on:

“To get there, the BDC is relying in large part on its work with McKinsey.”

McKinsey is THAT McKinsey, yes. The one the Trudeau Liberals love to give taxpayer money to, and whose boss or former boss, Dominic Barton is one of Justin Trudeau’s BFFs. Trudeau recently appointed him to be Canada’s Ambassador to China — that’s how much he admires that guy and his multinational firm. And Barton, like Trudeau, admires that communist dictatorship. Here’s the entry for Barton in the Left’s Wikipedia division, where Barton is immediately described as being “known as Bao Damin (Chinese: 鲍达民) in China.” Who has a Wikipedia entry like that? Xi Jinping does, but I mean what Canadian?

McKinsey has been in the news lately, because of the revelation that in excess of 100 million dollars have been doled out to McKinsey by the Trudeau/Freeland Liberals for who-knows-what (literally, who-knows-what). So if the BDC is (also) getting advice from them, I’m all the more dubious.

Some have dared question the doling out of all these millions in consultant fees because, coincidentally, the Canadian government has also been on a massive hiring binge in the past seven years, and the government has grown exponentially bigger than it has ever been in history, and now employs a sizable percentage of the population of Canada — by my calculation: 24.8% of the non-self-employed working population.

From an article last year, again in the state-owned CBC (because I know you love the irony):

“A pandemic-fuelled hiring spree has grown the federal civil service by more than 35,000 people since April 2020, according to a CBC News analysis, helping add billions to Ottawa’s payroll costs.

“Figures supplied by the Treasury Board and other ministries and departments show the federal government added 19,151 jobs in the fiscal year ending March 31, 2021, and another 16,356 positions in fiscal 2022. All told, the feds now employ 335,957 people across the country: a 12 per cent increase from pre-COVID times, and the greatest number of public servants in Canadian history. …”

Seems like a huge part of the current government’s effort is the growth of the government itself, and with it, its influence and control. Because for all that hiring, and the promises to grow still more, and all that ultra-expensive consultancy spending on the pro-China “experts,” Canada’s productivity is morose, our standing in the world is reduced to invisibility, our dollar is in the doldrums, we’re staring a recession in the face, family housing is out of reach for millions, people aren’t even starting families as marriages are down, we no longer make enough babies to sustain our nation, homeless people live in “tent cities” throughout major cities, gang killings are rampant, uncountable numbers of people die from drug overdoses every year, and we are now suffering through an inflationary storm of governments’ own making, among the other problems, yes, like crown corporation asses spending our money like it’s going out of style, which it kinda is.

Governments have increasingly grown, and increasingly messed with and tried to control the marketplace and the lives of citizens for ages, and in history, this never ends well, as we can see in China and elsewhere — here too. They have learned nothing. Or maybe they are, in fact, on a different path (or as it’s known in China, 或者他們實際上在不同的道路上).

Previous article
No, (this) PTBC does not stand for “Patterns of Total Body Connectivity”
Next article
Tweetpoo for Tuesday January 24 2023