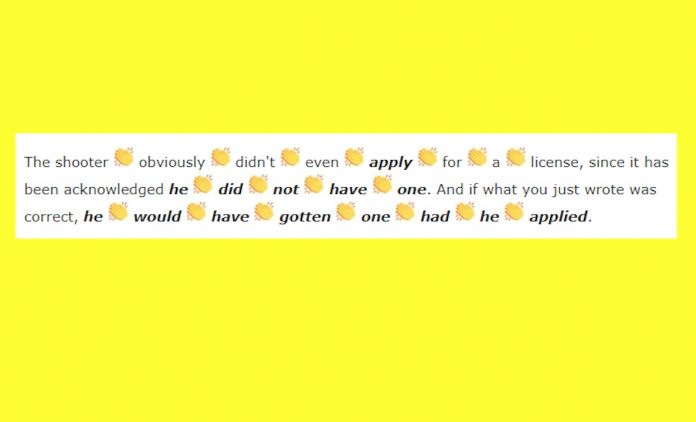 The state-owned CBC boosted the left’s gun control fetish this morning, with a fresh article misleading — or at best confusing — some Canadians once again.

See, there are new, tougher gun laws in the works — already passed last May by the Libs and NDP as backup — but not yet enacted. The CBC article seems designed to suggest that had these new improved tougher gun laws been enacted, the tragedy in Nova Scotia might not have happened.

…The chief firearms officer in each province must conduct a background check on anyone applying for a Possession and Acquisition Licence (PAL) — something all firearms owners must have before they can legally purchase a firearm in this country.

Bill C-71 requires that police examine an applicant’s entire life history for potential red flags — criminal charges, violence, spousal abuse — instead of the current standard of just the past five years. But that standard isn’t being enforced as police wait for the necessary orders-in-council from cabinet.

Under C-71’s rules, the Nova Scotia shooter would not have qualified for a licence because he was criminally charged after a violent assault on a 15-year-old boy in 2001. …

This is scurrilous bullshit. The shooter obviously didn’t even apply for a license, since it has been acknowledged by the RCMP that he did not have one.

…the RCMP said Wednesday that he did not have a licence to own a firearm — meaning he procured those arms illegally ahead of his murderous rampage. …

And if what they just wrote was correct, he would have gotten one had he applied, since his conviction problems happened more than five years ago. (Caveat: it is possible he applied recently but was denied a license for some reason, in which case the system worked as it was supposed to, and my point remains totally valid.)

Once again, and as is always the case in gun crimes, laws and rules and regulations did not matter to the evildoer. The new laws, which the CBC and reporters and liberals all seem to yearn for, would have made zero difference in this case. Yet they brought it up in this article in light of — in conflation with — this case. It does not compute. It is not logical. It is not “evidence-based.” It is not science. It is using the wrong dataset to reach a conclusion which is incongruous to the facts. How else can I say this so they understand?

license, since it has been acknowledged he

one. And if what you just wrote was correct, he

The reporters (yes it took two) know not of what they speak. As usual. Either that or they are being malevolent, and are trying to gaslight you. Either way it’s a massive fail.

Now with the advent of the Nova Scotia crisis, Trudeau promises still more new, newer laws, rules, restrictions, and policies to add to the ones soon-to-be enacted. Strengthening gun control laws even more than they are already, has few productive, positive effects, and none that would have avoided the Nova Scotia tragedy at all. The negative effects are easily identifiable though, and those negative effects are against all the wrong people: the innocent, good, law-abiding Canadian gun owner or those who want to be. Men, women, families, all good people who have done nothing wrong (as evidenced by their training, their thorough and ongoing background checks, and their license! And here the Liberals say they are all about the “evidence-based!”). That is a perverse outcome of a rather perverse enterprise.

I actually think even Liberals and NDP MPs know all this full well. This is but a fetish for them exactly as it is the liberal media, and they will continue to indulge their fetishes until they are satisfied.