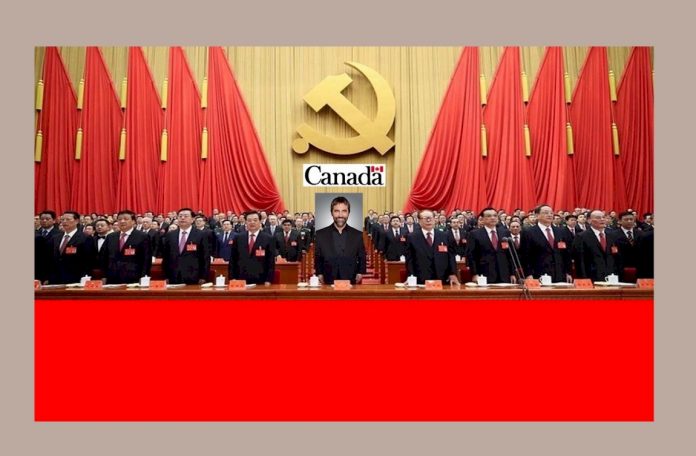 The degree to which Canadians now regularly give in, bend over, completely surrender, and stay silent in the face of the rapidly increasing Trudeau Liberal government’s China-style control over our lives has made me question my own countrymen and whether we actually share the same values. Canadians are behaving like good communist Chinese in the face of their government’s (the Canadian government’s) actions. The hugely, rapidly expanding big (Canadian) government control over me and my thoughts and speech, and yours, does not represent my values, at all. It’s clearly wrecking democracy. It’s changing Canada and not for the better. It’s making Canada more China-like. And that’s never a good thing. It’s as if the people in power (in this country) have a, um, “certain admiration for China’s basic dictatorship,” to quote Justin Trudeau. Which is also never a good thing.

Their latest bit of democracy-wrecking takes the form of a violation of our God-given free speech rights, in their bill C-10. These rights which are apparently so bothersome to the leftists (both the you’ve got to be kidding party, the ridiculous NDP, and the Liberals) also make an appearance in our Charter of Rights and Freedoms. Both of those entities — God and the Charter of Rights — used to matter in this country. They used to be our guiding lights. Not any more. Now it’s just Justin Trudeau and his own “basic dictatorship.” Now it’s just government. Big, authoritarian, government. It’s literally un-Canadian. It’s really more Chinese.

Don’t take my word for it. Reporting in the National Post on the freedom-wrecking bill C-10 which is now in question:

“Granting a government agency authority over legal user generated [internet] content — particularly when backed up by the government’s musings about taking down websites — doesn’t just infringe on free expression, it constitutes a full-blown assault upon it and, through it, the foundations of democracy,” said Peter Menzies, a former commissioner of the Canadian Radio-Television and Telecommunications Commission.

“It’s difficult to contemplate the levels of moral hubris, incompetence or both that would lead people to believe such an infringement of rights is justifiable,” said Menzies.

And yet it’s happening.

The push-back against this bill from Canadians is anemic at best. Sort of like the reaction to the Liberal authoritarians taking guns away from innocent law-abiding citizens in an attempt to disarm us, which they are doing for some reason having nothing to do with their having power over us, instead of the other way around as it should be. Columnists, talking heads, people like me — that’s the only pushback I’m seeing, once again. Meaning it will happen; this bill will pass. And Canada won’t be the same. And maybe people realize that, and like it. If so, I’m out. I’m not here for the weather. Or the tax rates.

Anyway, Terrance Corcoran joined virtually all columnists and summed it up very well last week in his column about this autocratic, totalitarian bit of China-style despotism which is the Trudeau Liberal Party’s latest foray into regulating and controlling Canadians and their thoughts and speech:

…A story from Blacklock’s Reporter last week quoted Guilbeault from a speech to the Centre for Israel and Jewish Affairs in which he promised legislation that would promote “content moderation.” The legislation, coming within weeks, he said, would give the government wide powers. “Once a publication is flagged, it will have to be taken down within 24 hours of having it being flagged. There are not a lot of countries that are doing that right now,” he added. In Guilbeault’s world, flagging and taking down — Chinese Communist style — would apparently be a sign of integrity.

Guilbeault apparently made similar comments a week earlier. “Could we envision having blocking orders? Maybe,” he said in a presentation to a meeting of Canada 2020, especially if such posts might “undermine Canada’s social cohesion.”

The idea that Guilbeault is out of control has been circulating with greater frequency in recent weeks. Former CRTC commissioner Timothy Denton wrote in the Financial Post last month that the new Broadcasting Act is “clearly intended to allow speech control at the government’s discretion.” …

It should be pointed out that the socialist you’ve got to be kidding party is completely on board with the Liberals in wrecking the place, as they voted with the Liberals last week to shut down debate on the bill. Let me repeat: a “democratic” party, in a democratic country, when given the free choice to vote either way, voted to shut down debate, so that nobody else — nobody who represents Canadians — could question the bill or make points as to its dangers to our country. They voted with the Liberals, to shut down a debate with regard to our free speech. Which, if you think about it, sounds like a basic dictatorship.

This morning’s editorial from the Liberals’ Globe & Mail division is in agreement with my assessment that Canadians need to worry about this. The editorial headline: “The Trudeau government says it won’t regulate user content on social media. Bill C-10 says otherwise“. It ends with this Trudeau/Liberal -unfriendly advise, most uncharacteristic of them, and not at all team-player-like (my highlighting):

There is no immediate and direct line between the removal of this key clause and the CRTC regulating online, user-generated content deemed unacceptable by the government.

But it opens a door to it – a door the Trudeau government itself originally recognized needed to be tightly shut. Mr. Guilbeault has never credibly explained why his government changed its mind, and Canadians are right to worry about it.