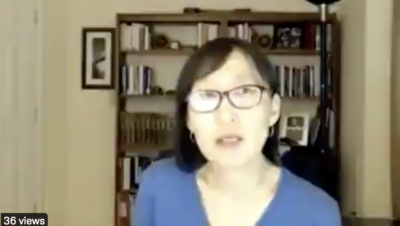 I could have headlined this “Who’s got a ‘hidden agenda’?” Or “THE REAL PLAN”. Or “Another Reminder To Make Sure You Don’t Say The Quiet Parts Out Loud.” Or maybe “Don’t smoke crack just before the Zoom call.”

This, from today’s Daybreak Insider newsletter:

Saule Omarova said of the oil, coal and gas industries “Here what I’m thinking about is primarily the coal and oil and gas industry.  A lot of the smaller players in that industry are going to probably go bankrupt in short order.  At least, we want them to go bankrupt if we want tackle climate change, right?” (Twitter). From Tom Cotton: This unhinged socialist wants millions of Americans who work in the energy industry to go bankrupt. And Joe Biden picked her as his top banking nominee (Twitter). From another story: Omarova has already been slammed by top GOP senators over her Marxist thesis paper which she has yet to share with the Banking Committee. She wrote the thesis, titled “Karl Marx’s Economic Analysis and the Theory of Revolution,” while studying at Moscow State University in Russia decades ago (Daily Caller). But not all Democrats are on board with Omarova (RedState).

Saule Omarova is President Joe Biden’s (D) pick to head the Office of the Comptroller of the Currency …  clearly a Marxist, she’s a Cornell University law professor (!) who specialized in the regulation of financial institutions, banking law, international finance, and corporate finance (!).

In that Office of the Comptroller of the Currency position in government, she wants various companies — in her country — to go bankrupt. Well, I guess that does fall under the Rubrik of “corporate finance.”

I listened to the video clip a second time to ensure I wasn’t mishearing it. Watch and listen for yourself: