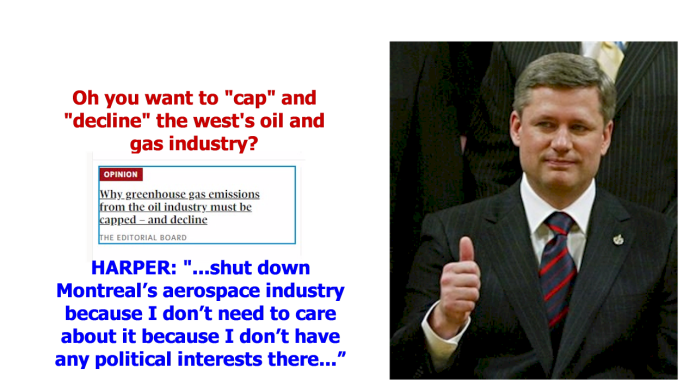 Last weekend over my first coffee, I posted a blip about the Globe and Mail constantly lamenting the west’s oil and gas industry and their editorial advocacy (and Justin Trudeau’s on the official policy side) to “cap it,” come what may. It goes on every single day like that. Here’s one headline sample I posted that day: 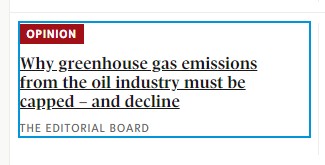 (By the way: Not related? Also see this from earlier today:
Biden cabinet pick on oil & gas companies: “We WANT them to go bankrupt”)

This constant advocacy — clearly put forth as an editorial advocacy position of the paper and reflected in their “news” and every part of their paper — carries on notwithstanding the fact that the G&M seems to LOVE them some cars. Everything about cars. The industry, the glorious machines themselves, the bounty of car advertising dollars that they profit from, and of course the huge mountain of cash generated in Ontario (almost exclusively) from the automotive industry (often government-subsidized like themselves, and clearly government-sponsored and supported, again like themselves. Huh.).

This is amplified in (A) their huge DRIVE section of the paper which speaks mostly about the latest cars and how great they are and (B) their car ads all over their paper and (C) Their silence about the dirty, dirty car industry right in their neighborhoods helping enrich them, feed their families and/or their friends’ and neighbors’ families.

Ironically, or in fact, amazingly hypocritically, these things all exist within the same paper that has a permanent “CLIMATE CHANGE” section, and editorials and “news” stories that follow their climate emergency script and demand “caps” and “decline” or the absolute cessation of the oil and gas industry in Alberta and the west.

Now correct me if I’m wrong, climate nuts and freak-out artists, but cars are one of the scourges of our society today. Right? “Literally,” as they would say, an “existential” threat to our entire world. To life itself. It’s a “climate emergency” and all that. “Vote like your life depends on it,” Barack Obama intoned to impressionable young minds last week during the climate confab in Europe at which he arrived via a private jet, “because it does!” he added in an effort to literally freak the young-uns out. Nice. (And ever-so honest! Real science-y, too!)

Thus, I explained last weekend, the Globe and Mail — and by extension, to be consistent, fair, logical, and, you know, “save the world,” the entire family consisting of themselves and the Trudeau Liberals, NDP, and Greenies — should demand a “cap” of… 46 cars per year out of Ontario. (Where did I get the number 46? “I pulled it out of my ass, which, if I understand correctly, is how they do it,” I wrote. I stand by it. Or rather, I’m still sitting on it, as I’m typing.)

Now Stephen Harper has unwittingly joined me in pointing out the glaringly obvious hypocrisy.

The Globe and Mail picked up a recording of a speech this week in which Harper points out the aerospace industry in Canada has long been supported (and I would add sponsored, paid-off, granted money, and variously co-opted by feds, especially liberals and unions, and the Quebec government demands no less; and they have all benefitted politically and financially as a result), and nary a liberal-lefty nor Globe and Mail correspondent has or would even bat an eye. It’s not just hypocritical. It’s corrupt.

Stephen Harper is criticizing Prime Minister Justin Trudeau’s climate-change policy for unfairly singling out “certain parts of the country,” as the Liberal government proceeds with a hard cap on oil-and-gas emissions that are expected to particularly affect provinces such as Alberta and Saskatchewan. …

… “ ‘And one of the biggest growth of global emissions is the aerospace industry,’ ” he continued.  …

… “Obviously, the way some things are being handled today – where certain parts of the country are singled out in ways that others aren’t – I think is really inexcusable.”

He zoomed in on aerospace rather than cars as I did, because he was making a reference to buying votes in Quebec, where the aerospace industry (Bombardier et al) dominates. But he could have done both and killed two fat birds with one noble stone. I suggest the G&M and its club members do both if they want to have a semblance of honesty or exhibit an ounce of understanding of actual science. Cars and planes, trains, and snowmobiles too. (Truth be known, ships are even worse than cars, CO2-wise. Sorry Maritimes, you’re baddies too, and you must be “capped!”)

Or else they could all vocally and politically and through official policy, support those industries, and oil and gas too, as I believe Stephen Harper does, as any normal, good, sensible, thinking, serious CANADIAN would.

Previous articleBiden cabinet pick on oil & gas companies: “We WANT them to go bankrupt”
Next articleNearly broke my keyboard smashing the LIKE button