Bias by omission: pictures you would never see in liberal media 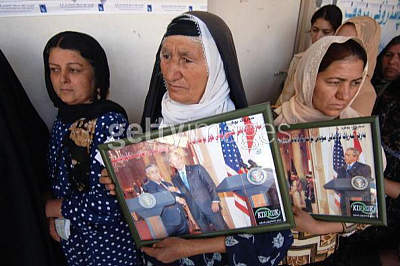 You’d have to read the papers pretty thoroughly to find much good news about the historic constitutional vote in Iraq, and finding many pictures is also difficult.  Finding positive-looking pictures instead of pictures depicting the constant negative image the media want to portray…. is practically impossible.  Finding pictures of Iraqis crediting President George Bush and America with their positive sentiments is simply unheard of.

There is, in actual fact, lots of positive going on in Iraq along with the negatives.  I’m personally part of some of that positive action, simply by my making the most minute, slightest imaginable effort.  Lots of other people are also making a positive difference.  Many on the left, however, are making a negative difference.  And they’re doing it on purpose.  I find this troubling.

That’s why I was pleased to find some positive pictures (hat tip to Exile, again, who found some on some other blogs).