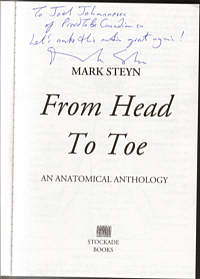 As regular visitors know, I’m a fan of Canadian political writer and columnist Mark Steyn, and have quoted him so often that I promised myself and I’d stop doing that for at least a while.  He’s so quotable.

As an aside (and yes I did post that picture already when I got the book in the mail), he signed a book for me saying:  “to Joel Johannesen of ProudToBeCanadian.ca—let’s make this nation great again!”  I wholeheartedly agree.  And see, I quoted him yet again.

But my excuse is that the National Post is having a contest called Beautiful Minds, and National Post columnist and member of our Columnist team, Barbara Kay, was asked to do a profile of one of the nominees, Mark Steyn.  She’s a fan too, as are all smart people, I figure.

Here’s the National Post’s explanation of the contest first, then Barbara Kay’s profile of him:

This fall, Britain’s Prospect and America’s Foreign Policy magazines asked readers to pick their favourite “public intellectual” from a list of 100 world-renowned thinkers. The National Post is conducting a companion search to find Canada’s most important public intellectual. As with the global contest, our Beautiful Minds competition defines a public intellectual as someone who has shown distinction in his or her own field, and can communicate ideas and influence debate outside of it. All candidates must be living, have a strong connection to Canada and be active in public life. Post employees and columnists are ineligible. Selected candidates will be championed by Post contributors, with one profiled daily. In today’s installment, Barbara Kay profiles legendary conservative columnist Mark Steyn. As profiles are published, they will appear on the contest site, http://www.nationalpost.com/beautifulminds . In November, the site will be open for voting, and readers will be invited to pick their favourite public intellectual. Write-in candidates will be welcomed.

As a subject for serious inquiry, Canada tends to fall off the radar screen of nominally Canadian public intellectuals, such as The New Yorker’s Malcolm Gladwell and the Washington Post’s Charles Krauthammer, who made their careers outside our borders. Mark Steyn is atypical in this respect, and although he would probably shudder at being lumped in with our era’s general run of left-wing academic intellectuals, is uniquely deserving of the title, “most influential Canadian public intellectual.”

The 1998 debut of the National Post introduced me to Steyn’s writing. I was instantly gobsmacked by his quicksilver intelligence and merry iconcoclasm gushing forth in firehose-strength torrents of coruscating prose. I remember dashing off an e-mail to the editor, “Whatever you are paying Mark Steyn, it isn’t enough.”

Although he is now an international mandarin of contemporary journalism, his editorial colleagues treat Mark Steyn almost as a creature of myth or legend. Nobody, for example, is sure where he now lives—Canada, the United States or Britain. Former boss Barbara Amiel quips, “We believe he lives in an SUV that operates between New Hampshire and Quebec, but your best chance of sighting him is in Washington or London, where the list of people trying to see him ranges from Cabinet ministers to film stars.”

He’s here, he’s there, he’s everywhere: in newspapers and magazines, on the Web and the airwaves, boosting the morale of lonely conservative and libertarian Canadians, heaping mockery and derision on myopic anti-war protesters, flaying terrorist apologists the world over. Steyn is the Lancelot of the West’s virtual Round Table in the battle against political correctness.

– On Canadian Medicare: “Unlike Britain but like North Korea, in her Majesty’s northern Dominion, the public health system is such an article of faith that no private hospitals are permitted. Canada’s private health care system is called “America”;

– On a proposed Declaration of Reconciliation to find areas of compromise between Muslim and Western nations: “Maybe the Grand Congress of Reconciliation would thrash out a compromise whereby we lightly pebble-dash adulteresses, merely castrate sodomites and kill only some of the Jews”;

– On multiculturalism: “Multiculturalism is really a suicide cult conceived by the Western elites not to celebrate all cultures, but to deny their own. And that’s particularly unworthy of the British, whose language, culture and law have been the single greatest force for good in this world”;

– On America: “For everyone but America, the free world is mostly a free ride.”

There are more scholarly and “intellectual” writers out there, but nobody captivates readers like Steyn. Dominic Lawson, a long-time editor of Steyn at The Daily Telegraph, explains it: “Mark Steyn … realizes that wit is the deadliest weapon of all for the polemicist, because it ensures that even those who would not normally be prepared to listen to such opinions will do so, right to the final full stop.”

Steyn presently writes—a partial list—for Canada’s Western Standard, America’s Chicago Sun-Times, New York Sun and Washington Times. He’s National Review’s “Happy Warrior.” Abroad, he appears in Britain’s Daily Telegraph and The Spectator, as well as the Jerusalem Post, Irish Times and The Australian. Not bad for a guy with a passion for Broadway musicals (in spite of which, he is neither Jewish nor gay), and who started out as a disc jockey.

Steyn is both loved and hated, but no one is indifferent. Sarah Sands, another Steyn editor at the Telegraph, says: “He is the enemy of the banal and the cozy. After September 11, Mark dared say what almost nobody else would. Liberal appeasement did not work. He became the voice of Tod Beamer (‘Let’s roll!’).”

My clinching argument comes from the Saudi ambassador to the United Kingdom, Prince Turki al-Faisal, who once fulminated: “The arrogance of Mark Steyn knows no bounds.” Admirers and detractors alike should agree that the writer who can get this far under the skin of a Saudi diplomat wins hands down for most influential Canadian public intellectual.