I’m (a) sane, and (b) I’m a conservative rather than a communist, a socialist, a liberal, a fascist, a left-winger, or any other of the almost identically awful flavor of “progressive.”

So obviously I’m all for governments reducing costs and lowering taxes.

But Christy Clark, the all-in progressive BC Liberal Party premier of BC, takes a typical progressive fool’s stance on the current taxation situation in BC. Here’s an official announcement statement (which reads like a government statement directly from PRAVDA from the old Soviet Union). While promising more government spending on programs for what she calls the “needy,” which in this case is perfectly healthy happy students attending taxpayer-funded, state-owned colleges at relatively little cost, on government-sponsored student loans, Clark also boasts:

“…an additional 325,000 people no longer pay B.C. income tax, and a total of more than one million British Columbians pay no provincial income tax…”

A vast and growing number of lower income-earning people paying no income tax while higher income earners pay all the tax, is going to end badly. This is the kind of nonsensical progressive thinking fueling much of the left-wing progressive movement. And you can see the very definition of progressive at work here.

The fix is in. It’s nefarious like a pyramid scheme. Or a Ponzi scheme. And it’s stupid, and it doesn’t work. 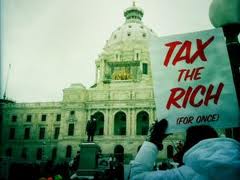 Who wouldn’t be in favor of more government hand-outs, welfare, social housing, entitlements, so-called government “investment,” student loan welfare/aid, so-called “stimulus,” social programs galore, when you don’t pay taxes, and only those who work hard and earn more income pay all the taxes  —  and usually don’t get the benefits?

Moreover, when you don’t pay income taxes, who wouldn’t vote for the party which promises more “free” goodies, and to pay for it by raising income taxes (especially on “the rich”)?

It’s the stuff the left-wing is made of. It’s like a pernicious weed or a cancer. It grows on itself. It’s progressive.

Everybody should pay income taxes. Then everybody will vote for the parties which limit government, spend efficiently, keep taxes low, and against those progressives who can’t restrain themselves and which actually want to grow government and keep on raising taxes on fewer and fewer people until there’s none left.

Somebody’s got to pay. And I assure you, it isn’t “the government.”

Yet that statement I quoted above, from Clark, the Nanny-in-Chief, is as I said actually taken from a prideful announcement referring to students “in need,” wherein the benevolent nanny-state government (actually, it’s not even her own provincial program but rather a federal one courtesy of the progressive “Conservative” government) promises more taxpayer support for all the whiny students who took out student loans and now say they can’t afford to pay them back. They’re students “in need,” see, which “the government” will rescue.

The Government of Canada will cover the interest amount owing that the borrower’s affordable payment does not cover.

The “Government of Canada” will cover all of that cost, huh?

Previous articleNo, the state won’t provide you with a “Canada Day” flag. Buy your own.
Next articleBC teachers’ union posts social media job for $92,000 per year.