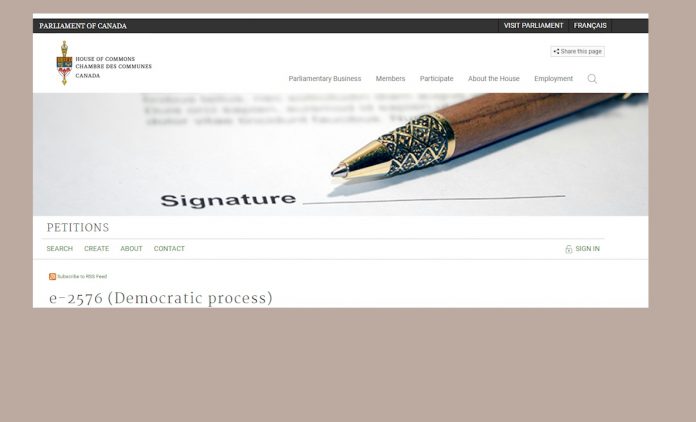 One federal E-Petition led me to another. I recently signed one, the one in support of gun rights and against Trudeau’s latest idiotic gun bans. You should too. More on that in a second.

There’s another anti-gun-ban one — a different one — here, authorized by Garnett Genuis, Conservative from Alberta. I signed it too, adding to the 2925-odd who have already. I did appreciate the anti-robot security code the federal government expected me to type in after signing:

Who you callin’ a pussy? This is a pro-gun petition! The people who DON’T sign it are the pussies! (Or was this a funky subliminal liberal sex signal?)

There’s yet another anti-gun-ban petition, this one authorized by Conservative Todd Doherty of BC, similarly asking “Immediately repeal the gun ban which lists about 1500 firearms as illegal…” which has a whopping 49,154 signatures. Signed it too!

This next petition is the big gun, though. I think Trudeau would call this a “Military assault-style petition.” Or a “military-style assault petition.” Michelle Rempel Garner authorized it, and it’s got 186,725 signatures so far. I’ve never seen anything like those kind of numbers. Make sure you sign this one, and the other two as well, if you care about freedom and democracy and your rights. If you don’t care about freedom and democracy and your rights, however, and would prefer an undemocratic one-party state, or a police-state or even a full-on tyrannical dictatorship or somesuch, and you want a state which seeks to disarm all its citizens, definitely don’t sign them.

The three anti-gun-ban petition amount to nearly a quarter-million signatures. Some sigs may be the same, as in my case. But that’s a huge chunk of the country right there.

I stumbled onto this next one through a search of the latest petitions. It’s an effort often found these days: a guy from the left using this pandemic as a yummy springboard to more big, bigger, the biggest yet, permanent government programs, and really, a complete change (“an overhaul,” in their own petition’s words) of the whole nature of government and really, our whole way of life. In this case, it’s more big government redistribution of wealth and income in the form of a permanent universal basic income program. “Never let a good crisis go to waste!” — say all the leftists these days. Yes ladies and gentlemen, it’s money, money, money for everyone, no matter what you do or don’t do. Everyone gets their paycheck, no matter what. From “the government” (wink!). It’s authorized by MP Gord Johns. NDP. Naturally.

“… overhaul our employment and welfare systems and implement a guaranteed, consistent, national, and livable universal basic income system for all Canadians in all parts of Canada.”

That universal income petition has 3090 signatures after a full week.

This other one is odd. I’ve been on about how Trudeau cannot muster the courage to call-out China for their myriad malfeasance — and yet his obsequiousness toward them, thanking them, and such; and for his reluctance (and that of others among his MPs, ministers, and appointees) to thank Taiwan for medical supplies they (separately!) recently donated to Canada. This, Team Trudeau does in deference to Communist China’s “One China” policy, and its Commie claims over Taiwan. Conservative have raised it in the house and challenged Trudeau repeatedly on this, scolding him and mocking him and goading him into at least saying the word Taiwan. And don’t even get me started on Bruce Aylward, the Canadian WHO delegate, who couldn’t utter the word “Taiwan,” nor answer good questions about it from a reporter, choosing instead to hang-up on the reporter, all caught on video. He too got a sound shellacking by many.

So does this one foretell a Liberal Party split? Severe division in the ranks? Are they breaking up? That’s what they’d ask if it were a Conservative doing this. It looks like it should have been started by a Conservative or a conservative. But it was Judy Sgro, a long-time Liberal MP, who authorized this one, and it has just 22 signatures so far (only started today):

We, the undersigned, The Citizens and Residents of Canada, call upon the House of Commons to:
1- Publicly thank the Taiwanese government for their gift of medical masks to Canadian healthcare workers and First Nation communities;
2- Publicly congratulate the Taiwanese people on having successfully contained the COVID-19 crisis;
3- Publicly endorse Taiwan’s meaningful participation in the World Health Organization (WHO) and World Health Assembly, among other intergovernmental organizations , including by co-signing a letter to the WHO Director-General, drafted by Japan and the United States and signed by other like-minded nations, to invite the Taiwanese delegation to the World Health Assembly
4- Encourage stronger bilateral relations between Canada and Taiwan, including cabinet-level communication and travel; and
5- Invite Taiwan’s health minister Chen Shih-chung to address a parliamentary committee to discuss Taiwan’s successes at combating the COVID-19 pandemic and share learnings with Canadian authorities.
I’d sign it, but I’m honestly not sure what to think here, given the sponsor. And I don’t want to get in the middle of a break-up!