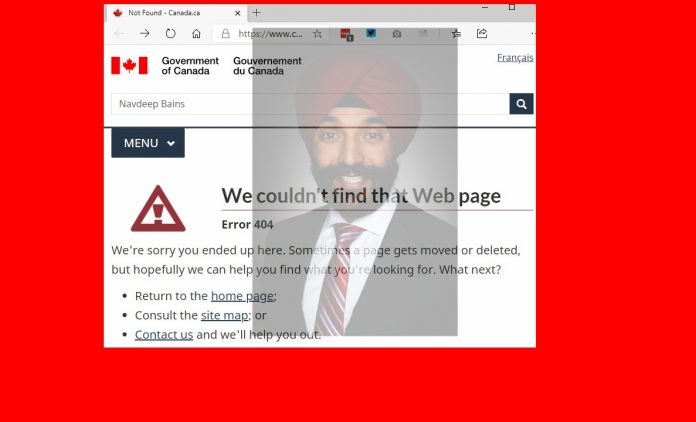 “We must take at face value Navdeep Bains explanation that he is leaving cabinet to spend more time with his family.”
— John Ivison, Post Media columnist, January 12, 2021

What? We must? Why? When did that news media standard start? Since today? I mean are you even serious?

Do I even need to ask how this would be treated if it weren’t a Trudeau/Liberal government? No I do not. Shocking that there’s so much division in politics and people don’t trust the news media, huh?

Ivison’s column is headlined “The cabinet shuffle is a puzzle,” yet he has literally no questions. Maybe Ivison does puzzles by simply stating, “we must take at face value that there are a thousand pieces and they aren’t put together.”

The whole cabinet reshuffle is made necessary because of the fact that Bains quit, suddenly, citing the usual “spend time with family” thing. Quitting is a rather dramatic thing to do — right after an election, don’t you think? Especially when it’s a senior cabinet minister quitting. And we’re in the middle of a national health and economic and existential emergency. You sure you’ve got exactly no questions about that, Ivison? He seems sure inasmuch as he answers exactly zero questions about it, and even asks exactly zero.

Here’s some other reporting: “The tweet [Bains’ tweet announcing he is quitting] came after an Ontario digital media platform, the Pointer, reported that Bains was involved in a “questionable real estate transaction” in partnership with former Liberal MP Raj Grewal.” This according to The Straight.

OK well how credible are these reports? It’s not like John Ivison’s employer’s own paper reported on Bains being involved in these stories. Oh hang on they did.

The Straight raises questions, if gently, and points to other more substantial reporting at The Pointer, which itself points to… wait for it… National Post reporting on Bains — and it’s a news story which reads like an shocking story of intrigue with fictional players from some fictional third-world land but it’s Canada, and includes a Liberal MP, Navdeep Bains. The word “shocking” is right in the headline but it truly is shocking reading: ‘Shocking’: How phoney Sikh temples are taking advantage of religious immigrants | National Post.

Then read this one about Bains and another Liberal MP at… wait for it… National Post: “RCMP called to probe tale of two Liberal MPs, a suburban overpass, trip to India and multimillion dollar land deal.”

I am not accusing Bains of anything, as I have even less knowledge about Bains’ past dealings or non-dealings than Ivison pretends to not have and clearly I have no reason to trust most media reports. Maybe all of this has very reasonable explanations, and maybe Bains is actually dealing with health issues or some other personal matter (God help him if he is —I mean it). And better yet, maybe this is all totally square. I only have questions because I’m normal and it’s my damned country, and I don’t take much of anything any politician tells me — especially in circumstances like this — “at face value.” But it’s literally the news media’s job not to take anything politicians say at face value. Here we have a journalist telling us “we must” take it at face value.

Ivison’s comity toward Liberal MP Bains is exactly the sort of smarmy nonsense I’ve come to expect from the Trudeau face-licking establishment news and commentary media. If a Conservative says “boo,” it’s investigative journalisming galore, with endless and repeated questions and smug, haughty demands for official comment from all Conservatives. There is no “face value.” And certainly no “we must take [anything they say] at face value.” When questions arise about the Trudeau Liberals, it’s “we must,” for some weird inexplicable and certainly ungiven reason, or as some sort of self-evident fact.

P.S. See this article for a reverse of what Ivison did.