Why is CTV News (UPDATE: and others) misinforming Canadians on Obama student speech controversy?

Liberalvision CTV pretends “Republicans” and “conservatives” are upset over Obama’s speech to students.  So they’re misinforming you. On purpose.  Think about that.

The newsboors at CTV News just got done telling Canadians that “Republicans” are all upset over the mere idea that President Obama is giving a speech to school kids (piped in via the internet to all schools) this morning.  “Obama speech to kids draws fire—before he gives it” reads the fully bullcrapious headline at CTV.ca, with that full knowledge of the duplicitous nature of that headline. 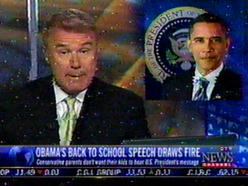 They know full well that it’s not the mere fact that Obama is giving a speech, nor even is it the content of that speech, which we’ve all seen or read in advance, since the content of the speech was released yesterday (and of course it’s all sweetness and light).  And since the President giving simple pep talks to students is an age-old annual event, the overarching implication seems to be that “Republicans” are simply being unprincipled, hypocritical, partisan, conspiracy-theory idiots.

So they’re trying to cast “Republicans”  (as if it’s only “Republicans” or “conservatives” rather than average “Americans”) as those silly twits who, manifestly, aren’t on board the good innocent ship, the SS Obama.  So let’s hate conservatives and Republicans because they’re so stupid.

They know that it’s actually the accompanying material or instructions that the Obama White House provided to teachers before the speech —ever so helpful “lesson plan” material in which they suggested that the public school teachers make Obama posters with instructions for the kids to learn more about… Barack Obama.  That was just one of their “lesson plan” ideas.  The White House has since changed the wording in their “lesson plans”, because it became obvious that they were caught trying to send out material that could easily be seen to be literally Orwellian and fascist.  Because it was.  Their changing of those helpful “lesson plans” was a tacit admission of that fact.

For example, the original lesson plan asked children to “write letters to themselves about what they can do to help the president. These would be collected and redistributed at an appropriate later date by the teacher to make students accountable to their goals.” It has since been changed to say “Write letters to themselves about how they can achieve their short-term and long-term education goals.”  Teachers are also given suggestions to tell students to “build background knowledge about the president of the United States by reading books about presidents and Barack Obama.”  The lesson plan also asks students, “What resonated with you from President Obama’s speech? What lines/phrases do you remember? Is he challenging you to do anything?”

CTV makes no mention, on their national newscast, about the politically contentious “lesson plans”.

While leftists all clamor to fund the ACLU in order to get schools to outlaw the reciting of the Pledge of Allegiance in schools, the original lesson plan seemed to reek of instructing the students to pledge allegiance to Barack Obama.  It included writing exercises that students find ways to “Help Obama”.

The CTV knows all of this.  So it is extremely important that you ask yourselves why it is that the CTV is presenting the news story the way they are.

Here’s the actual words in the CTV News Channel story:

Anchor Dan Matheson:  “US President Barack Obama is scheduled to give a back-to-school speech this morning.  His message is pretty simple!!  Go to class, listen to your teachers, work hard, and you’ll do well!  But the talk is drawing major criticisms from some Republicans.  Several conservative organizations along with some families are accusing Obama of pushing his political views too aggressively!  Some people urging schools to boycott the address!”

[Then they show footage of a real southerner saying, in a real heavy southern drawl, that “…it’s sounding more and more like communism…”;  followed by another southerner who has an American flag sticking out of the top of her head saying it should be up to parents to make the decision about “…whether they want their children to hear that…”]

“Schools are not required to air the speech, some districts have opted out.  Some educators are leaving it up to the parents to discuss education with their own children.”

[More footage of someone saying the same thing —about the speech —no mention of the lesson plans.  Then anchor Matheson tendentiously adds the following news advisory to Canadians:]

“Most of the schools and school districts that have opted not to show Obama’s speech are in places where the President didn’t do so well in the November election.”

Lesson over and well-learned.

EVEN THE CBC DID BETTER

CBC reporter Susan Bonner —on the scene in Washington— reported like this:

“…Where the controversy began, was with some of the lesson plans that were suggested to the schools, when the notification went out that the President would like to address all of the students.  Those lesson plans suggested that students might want to write essays about how they might want to support the president and many of the President’s critics, some of the more vocal ones, saw that as an attempt at political indoctrination—as the President pushing his liberal agenda on students—some parents said ‘we’re not sending our kids to schools’, some schools have refused to air the address, which is being taped live at a school not far from here in Virginia.  But as I say those lesson plans have been dropped, the text of the speech was made available yesterday…”

A Different Lesson Plan for the President’s Speech

Don’t feel like following the Department of Education’s lesson plan for the President Obama’s address to school kids? Try discussing these questions with your kids.

Just in case you don’t like the “Menu of Classroom Activities [for] President Obama’s Address to Students Across America” on September 8, here are ten suggested alternative questions to explore with students from pre-K through high school.

1. President and Mrs. Obama have chosen to send their daughters to private school, at a cost of about $29,000 a year for each girl. What choices, if any, should other parents have about where their children go to school and about how to pay for educating their children?

3. When elected officials pass laws should they and their staffs also be obliged to follow those same laws or should they be exempt—and in either case, why?

4. If an elected or appointed public official breaks the law what should be done about that?

5. When elected officials publicly make a promise, what should be done if they go back on their word and do something completely different—including the exact opposite of what they said they’d do?

7. How much control should individual citizens have over their lives versus the amount of control given to government when it comes to things like education, health care, saving and investing for retirement and any other issue?

8. What limits, if any, should there be on freedom of speech, such as on the radio, on TV, on YouTube, in print, in classroom discussions, etc.?

EXTRA EXTRA
The National Post’s Kelly McParland ably plays the dumb-ass silly monkey game as well today, pretending that those stupid uppity conservatives merely have their panties in a twist over nothing more than a simple and perfectly lovely go get ‘em speech to students.  Thankfully, more than a few online reader/commenters have already outed him (and his sycophantic and like-minded …or lack thereof) high-fivin’ pro-Obama commenting fans, and politely insinuated that he’s either actually as dumb as he sounds, or he’s just pretending to be and is being full-on deceptive.

But I guess it could be argued by someone that it’s not Kelly McParland’s job to report all the actual facts of news events, even in his opinion pieces, since he’s not really a reporter but an editor and opinion-writer at a major news publication, the National Post.

(…Letting that sink in for a moment…).

And they’d lose that argument. Badly. 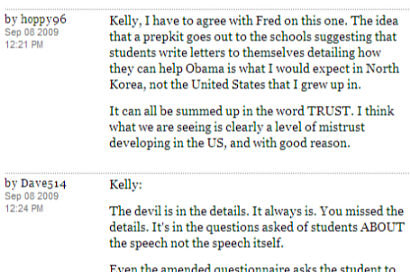 Note the emphasis on the word TRUST.

EXTRA PERFIDY:
Now it’s NEWS.  The National Post has taken this to the next level, which is to say they hit bottom, then made an editorial/journalistic decision to dig even deeper.  They now feature a dismissive, derisive, snooty headline on their web site’s front page deriding those who were concerned about the story.  So, it now appears apparent that the editorial position of the National Post is to publicly mock conservatives and any other Americans or Canadians who are concerned about the ACTUAL facts of the story today, to wit: the “lesson plans” that are ACTUALLY the subject of the concern surrounding what we all knew in advance and agreed would be and was an innocuous speech to students by the President. 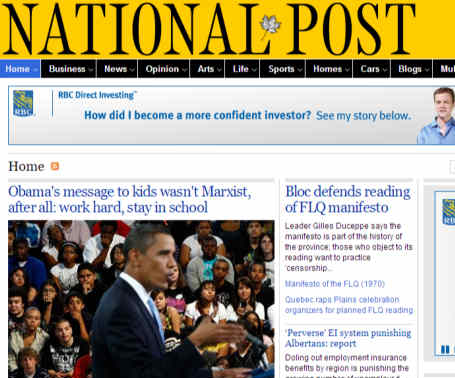 Obama’s indoctrination
Controversy erupted over Obama’s big address to America’s youth today—with many parents pulling their kids out of school. While the speech itself is fairly tame, it was the State Department proposed lesson plan for students that raised eyebrows. Calling for students to, among other things, write letters to themselves asking how they could help the President achieve his goals. Previous Presidents have given similar speeches, but those Presidents didn’t then try and turn students into a bunch of little community organizers.

EXTRA AMAZING: EVEN THE GLOBE AND MAIL GOT IT MARGINALLY RIGHT (in paragraph eleven):

“…Mr. Duncan [Education Secretary Arne Duncan] acknowledged again Tuesday that some prepared guidance for school officials included a suggestion that students could compose essays stating how they could help support Obama and his causes — an idea the education secretary acknowledged was wrong-headed. …”