We’ve got (snail)mail! From Communists! With bonus research from Joel: They have air conditioning!

After getting about 200 snail mail pleas and 3,000 phone calls from the Conservative Party of Canada (the CPC) to beg for my money (phone calls I simply don’t answer but I’ve logged hundreds of them —from 612-219-1293), I finally got a fund-raising plea from the Communist Party of Canada (the other CPC) via snail mail today (dated Dec. 1, it’s now Dec 10, so apparently it was held up by some postal service-related thingamading).

Aside from that whole “CPC” confusion, I never really confuse the two, since the Conservatives always refer to themselves as “Conservatives”, which I note they spell with a capital C for political accuracy (I’m persnickety that way), and they never call themselves “Tories”.  But the commies always conflate the words

“communist” and “socialist” and “progressive” all over their material, so I’m not sure what they prefer. But they too are at least accurate.

It cost them 54¢ in postage via Canada Post “Corporation” (wink!).  Plus “handling”, no doubt by “working” men or “womyn” being paid in excess of $15 per hour plus overtime and four paid days off per week.  And the cost of all that paper they stuffed into the envelope, including a letter, a contribution form, two flyers (exactly the same) which are practically on fire with all their militant class warfare battlefield arguments against anyone who isn’t “working people” (I think that’s me!), and of course the return envelope for my contribution.  They suggest I make my contribution with a cheque.  Presumably drawn on a bank.  Heh.  At least they don’t accept MasterCard or Visa or, God forbid (“God” —heh!), American Express (that’s got “American” in it!  Yucky imperialists!).

In their tree-killing paper-based material, in which they mostly express their hatred of all that is not socialist/progressive/communist, they remind me time and again that my contribution is tax-creditable.  A contribution of $400 will cost me only $100 after tax, they inform me.  That’s fantastic!  What a great tax break for me, and a boon to the Commies.  It helps them continue to hate me and everything I stand for, and manifestly to spread hate for everything Canada stands for, and the basis upon which Canada was built. And our friends the Americans. Spread the hate, baby!  It’s tax-deductible!  Or creditable.  Or something tax-y.

I looked up the commies’ office address on Google to see where exactly they’re located.  As if I had to tell you, it’s located smack dab in the you’ve got to be kidding 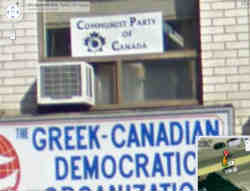 party leader Jack Layton’s constituency.  I did the “Street Views” thing so I could actually see their office.  After all, there’s tax implications!

It seems it’s right above that Greek-Canadian Democratic office, which I looked up and found to be another Communist Party-related organization. Funny how so many left-wing and extreme left-wing parties and organizations and minions glom onto the word “democratic”, huh?  Like they’re trying to fake us out or something. Of course their idea of “freedom” and “democracy” actually means socialism and communism (including “environmental ‘justice’”), so it’s really not so funny.  The Commies’ offices

are located right across the street from the Danforth Baptist Church.  And baby that IS funny!

And I couldn’t help notice the Commies have a huge honkin’ air conditioner hanging out their window.  Guess they don’t use it on account of it increasing the “Man-Made Global Warming” and all that capitalist evilness. MMGW is caused not by “working people” like them, but by the imperialist capitalists banks that we write checks on, and by the George Bush military industrial complex™, and the likes of dirty dirty Stephen Harper (whom they keep mentioning as if he’s some sort of filthy despicable evil incarnate, or something).

The Greek-Canadian Democratic organization’s commie web site wrote up about the close links between the Canadian commies and the Greek commies:

… Communist Party of Canada leader Miguel Figueroa congratulated the KKE [Communist Party of Greece] on nine decades of principled and militant leadership of the struggle of the Greek working class and people for democracy, peace, social progress and socialism. Noting the close fraternal relationship that has existed for many years between the KKE and the CPC, based on Marxism-Leninism and proletarian internationalism, Figueroa saluted the contribution of Greek-Canadian Communists to the Belogiannis and other clubs of the CPC in English-speaking Canada and Quebec, and to the labour, progressive and democratic movements in Canada.

I won’t be responding to their plea for my after-tax cash, on account of the fact that I don’t really have any after paying my taxes which pay for the state-owned CBC division of the Left, and other entities that work against me and everything I stand for.  I mean I won’t respond aside from this blogging action here, which they may find be somewhat counterproductive and (God, I hope) costly to them in some way. For my part, I still sell my patriotic Canadian flag pins for $10.  No tax break.  And I don’t hate Canada, or its “working people”.

I love the bottom lines on the Commie plea for cash:  First of all they say to write the check out to “CPC”.  Folks should take care to send it to the right address!  Then they add that “Your contribution to the CPC is the soundest investment you’ll make in 2009!”

Like they know so much about financial investments. I’ll invest in the stock market and private businesses, thanks. 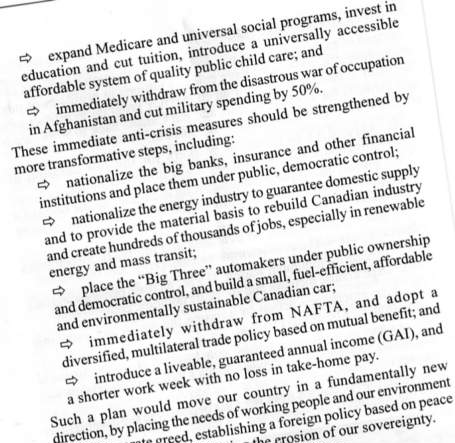 CAPITALIST UPDATE:
I’ve sold five patriotic flag pins so far, since this was posted.  And thanks Christopher R.!