You won’t see this picture on any front page tomorrow in any newspaper in Canada, because it’s a picture in support of the Afghanistan troops and (I’ll stake my life on this) our country’s noble mission in Afghanistan. 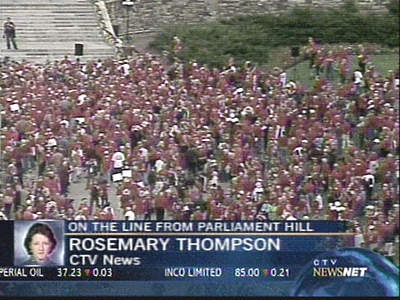 You’d see it in the papers tomorrow if it was a picture of people rallying against Conservative Prime Minister Harper.  Or Israel.  or America or “Bush”.

Everybody is wearing red not because they’re Liberals (another reason you’d see it in the paper, if true).  No, far from it.  It’s because a couple of Canadian soldiers’ wives came up with the idea of wearing red (representing hearts, and blood) on Fridays to show support for the troops.  It is a symbolic tactic started in the U.S. by some right-thinking folks a year or two ago (where red is the color of the conservative Republican Party!).  Ottawa radio station CFRA and conservative-friendly talk-show host Lowell Green and CFRA’s Steve Winogron and Steve Madely took up the cause and got the ball rolling, and it is starting to take hold and flourish in Ottawa.

Canadian Liberals are deeply frustrated because —well first of all because of that whole “red” thing —but also because liberals are once again being shown-up as being completely incapable of thinking of anything—ANYTHING—to do or say that will actually support our troops and support the mission; and because they have again proven that apart from their jejune and trite little cliché automaton blathering in which they recite “we support the TROOPS…” over an over, they have to follow those words up with “…but”; and it is becoming more and more obvious that they can’t think of doing or saying anything about it except that which will appease the enemy, demoralize our troops, ruin the morale of the country, weaken our resolve, and help us—Canada and the west—lose the war on terror.

Then they have the audacity to call that “Canadian values” and “our proud tradition”, right up there with limitless abortions and gay marriage and legalizing pot smoking and prostitution.  And the Liberal Party-appointed chief of their sacred leftist-biased state-run media bandies about the country speaking of the pleasure of pooing, rather than rallying the troops.

Watch/listen to this video/song.

Previous article
Book reviews that parents can use
Next article
Day of Reckoning for DDT Foes?