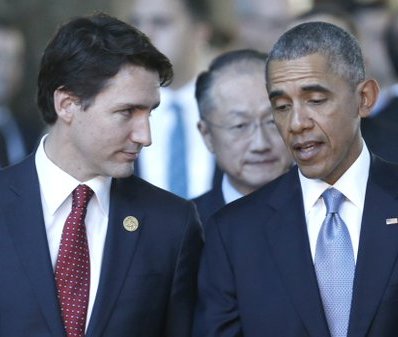 In both the U.S. and Canada, polls following the Islamist attacks in France show two liberal leaders way out of step with the people they supposedly represent and (gulp) lead.

The majority of Canadians oppose the government’s plan to resettle 25,000 Syrian refugees in the next six weeks, and the most common complaint is that there isn’t enough time, a new poll shows.

More than half of Canadians (54 per cent) either moderately or strongly oppose Prime Minister Justin Trudeau’s plan to bring 25,000 refugees over by Jan. 1, 2016. Meanwhile, 42 per cent moderately or strongly support the plan, according to an Angus Reid Institute poll conducted three days after terrorist attacks killed 129 people in Paris.

If I understand liberals like Trudeau and his Globe and Mail division correctly, Canadians are therefore full of hatred and racism. His Quebecers are even more against his refugee policy  –  60% opposed  –  which is fun, especially since over a third of those hateful racists voted for Trudeau to be their leader.

I’ve come to expect this “racist” crap from Barack Obama and his acolytes, but I did not see this coming: Trudeau joining Obama and calling those countrymen who disagree with him “racists” and “haters.”

Wierd though, he never called us that during the election! Polling during the long election campaign shows that Canadians were against Trudeau’s idiotic refugee election promise  –  first airily (as all Trudeau policy was) touted in May of 2015. But it’s now a firm government mandate which simply must be accomplished in exactly the next five weeks or it will all completely fall apart and never come to pass… on account of, um, some unspecified reason or something. According to the Liberals’ state-owned CBC division:

“Quite frankly, the loss of momentum would probably put the whole objective in jeopardy,” [Liberal Public Safety Minister Ralph] Goodale said. “The slippage might mean it never happens.”

Quite frankly, that’s what we call a total lie. And this effort to lie and overwhelm and freak out Canadians is, of course, a sign of the Liberals’ great respect for Canadians and Canada.  But be fair and put what he said in context and what the reporter asked and wrote after that you racist!  Yeah no that was it. That is the last line in the fawning news report. No questions, no explanations, just a fully acceptable statement, on that matter of grave national security importance. Look – I took a screen capture in case they accidentally change it or delete in five weeks.

Trudeau was elected in spite of his refugee promise, not because of it. But now he carries on as if he were elected on that promise, and is unalterably compelled by the election gods (the CBC) to fulfill it, world-altering Islamist terrorist events in Egypt, Lebanon, and Paris be damned. I think even his state-owned CBC would allow him to renege, especially given ISIS’s beheading of Chinese hostages yesterday. Trudeau loves communist China and their “basic dictatorship!” (Hey how many refugees is China taking? None! They may be racists!)

And as if to add salt to the falafel, Trudeau also insists on holding to his pacifist, idiotist election promise to bring our CF-18s home from Syria (now!) because apparently defending our homeland and helping the Syrian people and trying to contain a terrorist jihad, alongside France, the United States and others, is too mean and yucky and stuff. (Besides, the CF-18s may be needed to help clear snow in Toronto this winter). Just as the media is utterly incurious about Goodale’s urgency lie, Trudeau’s ludicrous CF-18 pullback gets a complete pass by his swooning media, who are today investigating with great rigour, on multiple fronts, whether a Conservative MP said “NDP horde” or “NDP whore” a few weeks ago during his entirely polite, happy, calm, gentlemanly, and well-worded victory speech (he quite obviously said “horde”). This goes on, as other nations, their leaders, and their media, finally now see the obvious need to up their game against the Islamists.

And as if I had to tell you, Canadians also support our CF-18s bombing the Islamist terrorists of ISIS. A poll released just today says “60% of people said they approved of Canadian airstrikes on Islamic State targets while only 30% disagreed.” You rarely if ever get 60% agreement on anything in Canada.

The term “tone deaf” doesn’t even touch this. Trudeau’s behavior is the mark of a solipsistic politician, and this –  both the solipsism and the massive and quickly-screened refugee influx from one or more terror-laden countries  –  does not bode well for Canada’s future.

Fifty-three percent of U.S. adults in the survey, conducted in the days immediately following the attacks, say the nation should not continue a program to resettle up to 10,000 Syrian refugees. Just 28 percent would keep the program with the screening process as it now exists…

President Obama should deploy his teleprompter brigade, push his chin way up and out the way he does pre-condescension, and this time haughtily declare a “red line” on this refugee idea, signifying his intent to summarily ignore the plan and abandon it. Hopefully Justin Trudeau golfs.