Two-Plane Trudeau inspires best line of campaign: “one for you and the media, and another for your costumes and canoes.” 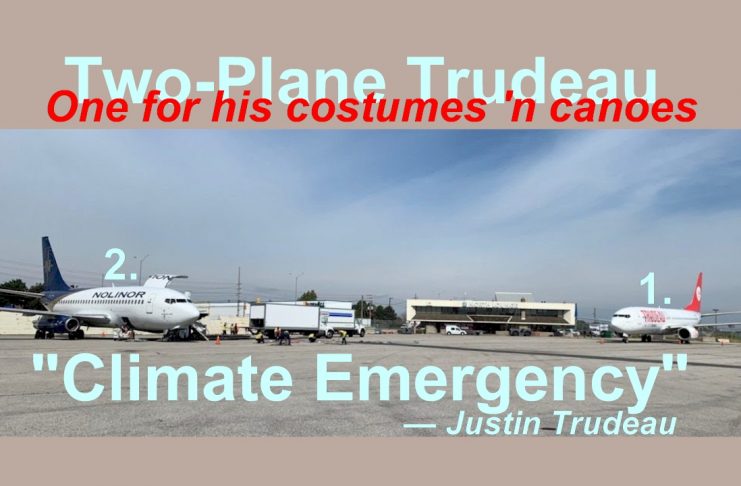 Aside from the Conservatives’ campaign slogan (“Justin Trudeau is not as advertised”) going from possibly the most grating for me to definitely the most prescient in light of the things that sprang to light proving it to be true over and over, the second best line of the campaign so far is Andrew Scheer’s.

After the Conservatives — the Conservatives, mind you, not the media — found out about a second Boeing 737 being used in Trudeau’s campaign extravaganza, Scheer quipped in the french debate last night, “one for you and the media, and another for your costumes and canoes.”

It’s funny because it’s true, and because it betrays a shallowness not seen since the last thing Catherine McKenna tweeted, but also because it betrays a hypocrisy so acute that in a sane world, it would end Trudeau’s career and make a mockery of notion the Liberals could possibly win an election. So maybe we’re laughing as a stress relief of some sort, because the world is, alas, nuts.

On the matter of fact that it was the Conservatives who found this out, not the media: yeah sure. Sure sure. Sure thing you guys. The media had NO IDEA there was another Boeing 737 tagging or flying out in advance of costume ‘n canoe boy. They never saw it. Had no idea. It’s a big gleaming white blob of an aircraft that according to flight logs, is always, always parked right beside the big TRUDEAU jet, and measures just about 40 meters wide and long and 12 meters high, but nope. Never saw it. Not. Once. No cover-up here. No hidden agenda. No colulusion. No corruption. Just straight-up honest reporting you guys.

@AlbertaGrl won Twitter early on today when she tweeted at an ever-so objective and observant news journalist tweeting out his journalisty stuff in an pretend effort to journalism all over the story — a story that the CONSERVATIVES uncovered:

But you people all knew when Harper sneezed in church. I’d say you all just weren’t looking because ….Liberals. https://t.co/HMVIkKOFMz