It was only today I finally figured out that the reason I’d seen Canadian flags at half-mast recently, despite being unable to think of any recent death of any national figure (these things typically last a day or maybe a week, so you’d think — or at least I thought — I’d know).

Today, I read, Canadian flags are apparently still, officially, by order of Justin Trudeau, flying at half-mast, and have been since spring — May! — due to… the discovery of graves at former residential schools.

I’m as upset about that awful stuff as the next normal Canadian who nonetheless celebrated Canada Day like a normal person. But are ya like me? Did you say to yourself, “WTF?” when you heard this today?

Just as they used to daily ask Erin O’Toole and every other Conservative (or even “Conservative”) how much he or she hates women and their abortions and how he wants to jail all women and force them to have babies, and whatnot, apparently now, the latest attack from the Justin-love media is to badger O’Toole endlessly about why on earth he’d want to be so insensitive as to raise that awful, awful, racist colonizer white-supremacist Canadian flag. Do you hate the indigenous, too? The apparent plan is to do this until he slips up, says something “racist,” and dares to sound remotely proud to be Canadian; and to then compare that to the ever-indigenous-loving, compassionate, and oh-so-sensitive Justine Trudeau who is solid gold on the virtue front, and properly hates Canada and is duly embarrassed as f.

So it has come up. (O’Toole forthrightly says raise the damn flags. He is factually correct.)

This is an irregular way to post anything, but for all the techno advances we’ve seen in the interwebs, there still isn’t a way to post an entire Twitter thread without duplicating every tweet. So here’s a JPG of it in the form it appears on Twitter — a tweet pertaining to an article he read at the state-owned CBC division of the Liberal Party (these be my words, obv.), followed by replies to his own tweet.

UPDATE: Jonathan added more (he’s no doubt getting a lot of feedback. We may have found an election issue: duz Kanada suk?) 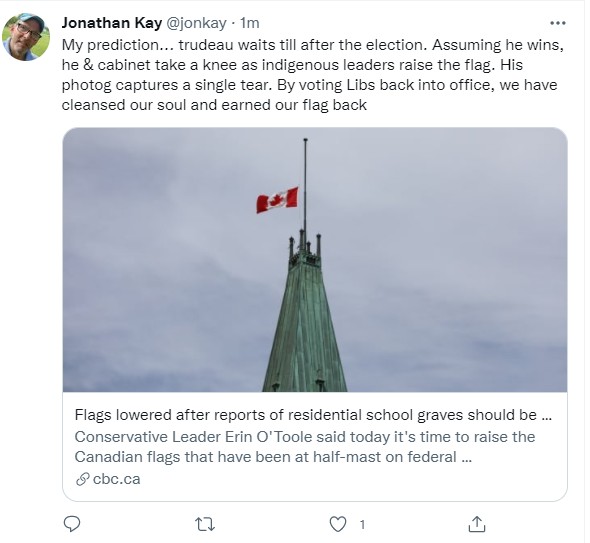