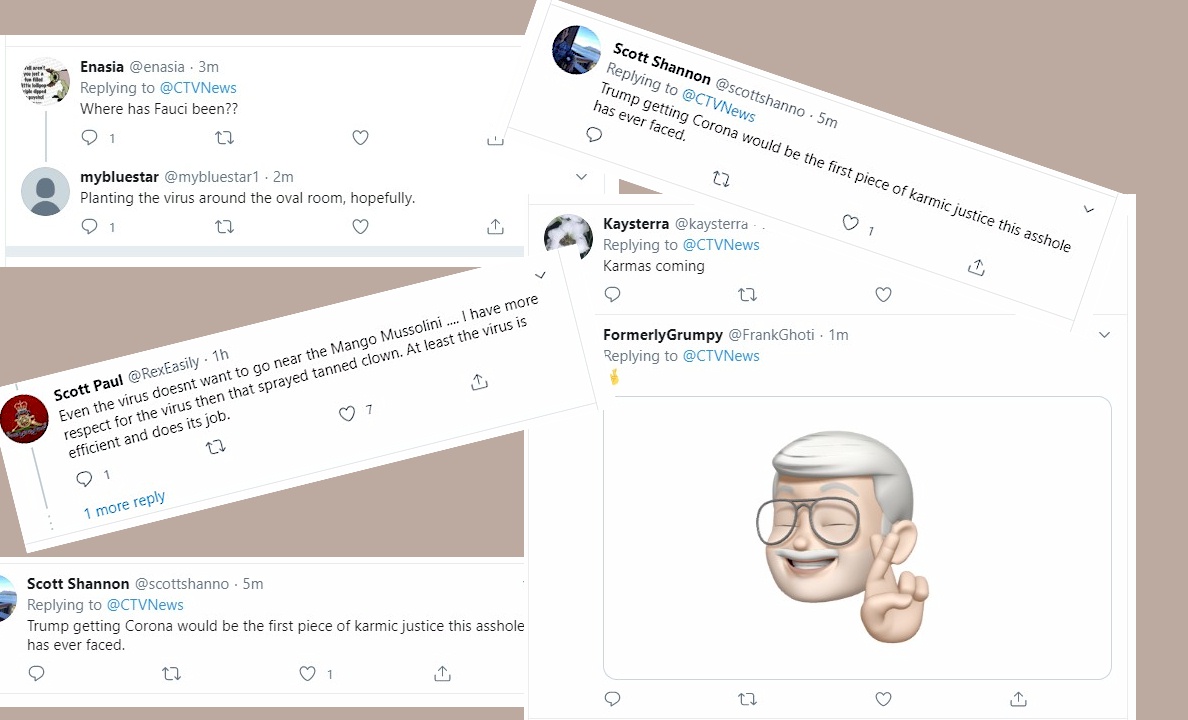 No. That’s utter bull. Get your head straight. You deserve to understand your country more accurately than that.

The media and many of its “elites” (all self-anointed) spend more time bitching and kvetching and pointing at and mocking Trump (to the best of their ability anyway), than they do anything or anyone in Canada including their dear leader, and literally their benefactor, Justin Trudeau. Challenge the Conservatives they do. But Trudeau? No, rather, they defend him, explain-away his nonsense, and run cover for him all day long. On state-owned, taxpayer-paid television and radio, and in taxpayer-supported newspapers. So here’s a bit of self-reflection for a change.

None of this is unusual, unfortunately, but here’s a Twitter thread I found today, May 7, 2020. As the “Likes” to the tweet piled up, I had to have a look-see. I wish I didn’t. It reminded me of the horrible comments I have found at the state-owned CBC over the years (which are among the worst, most despicable bits of commentary I have ever found on the internet, anywhere in the world, some of which I’ve documented here over the years).

One of Trump's personal valets has tested positive for coronavirus https://t.co/yAysgu5Ybw

That’s the original tweet. Not happy news, right? Right. You’d think. But it’s happy or hopeful news to some of those loving, compassionate, friendly, polite Canadians. I screen-captured their comments in case they get any sense, they grew up, or maybe some friend of theirs (assuming they have any) set them straight on, you know, “life,” and they do as they should, and delete their tweets, then possibly delete their entire accounts. This would happily ruin my demonstration of ugly Canadians in action. 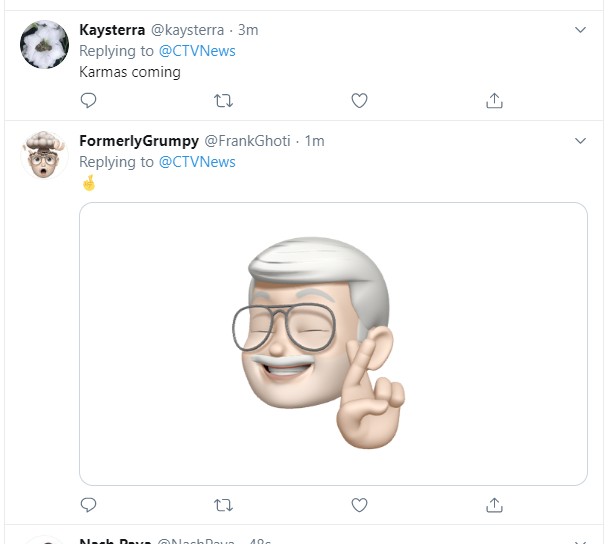 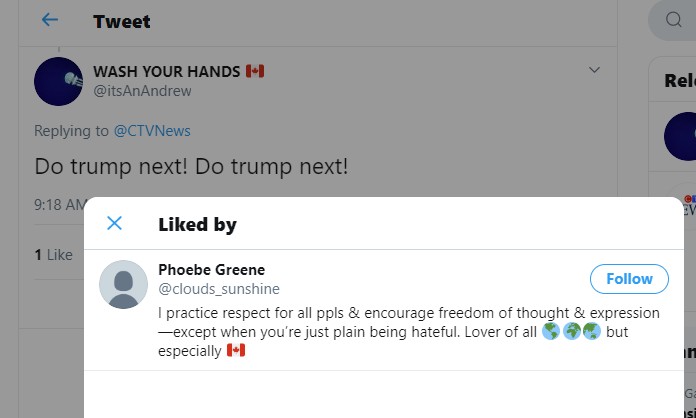 Phoebe Greene: “I practice respect for all ppls … except when you’re just plain being hateful. Lover of all…”

Yeah I’m gonna have to call bullshit on you and your entire fake principle set, there, doll. Here’s her own tweet:

I guess a hug is love, generally, but in this case it’s demonstrably hate. And disrespect. On purpose. So there’s that. 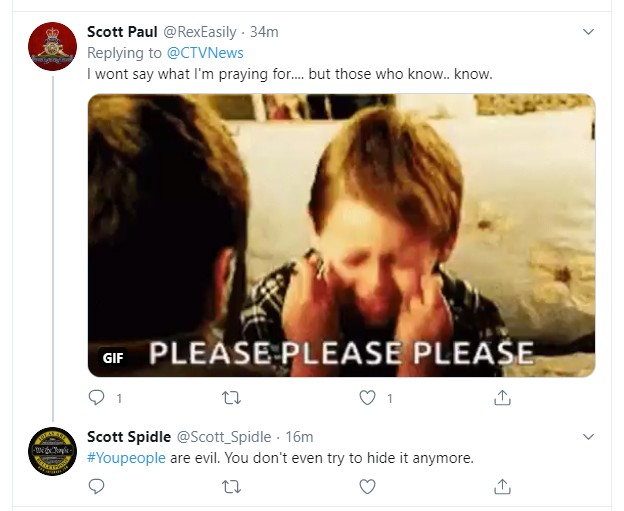 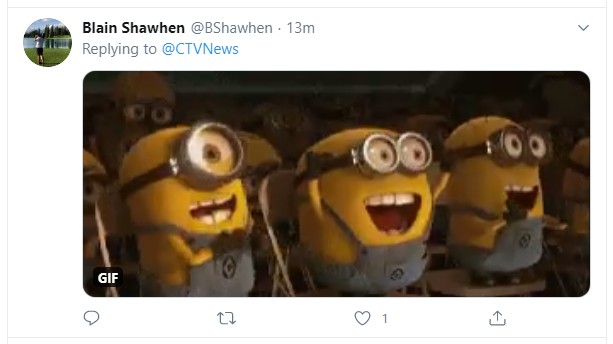 In fact, so many Canadians are among the stupidest people I know in the world. And they demonstrate it daily, often as in this case, as a mindless reflex. A kneejerk, hateful, perverted, unthinking reflex, usually smugly posted off-handedly as an anonymous comment. That is not an intelligent action, or that of a thoughtful person. This is hate, stupidity, and mindless group-think.

This isn’t a simple case of Trump Derangement Syndrome. This sort of smug, morbid, ghoulish death-wish, expressed with such glee and so openly, is simply sociopathic. This is a psychotic response to a bit of awful news. It’s reacting exactly the polar opposite of the way in which almost every Conservative and conservative reacts, to, for example, Sophie Trudeau’s COVID-19 diagnosis.

This is puerile, it’s playing politics like it’s a mindless team-sport, but worse, it’s a sport in which the audience actually hopes for death, and the ruination of families (no care, concern, or remorse expressed for the valet here) and the hope for the disease-killing of an American president — therefore the upending of an entire country, and one upon which Canada totally depends — literally for its very life as we know it. They clap like morons (or literally, as shown, like Minions) when something bad happens in the U.S. as long as a Republican is president, and especially now that Trump is president, but mostly, it’s only while all of the establishment forces are giving them cover for their intolerance and hate, and actually joining in. They get positive feedback from others in their perverted club.

This anti-Trump, anti-Republican, anti-conservative, and more broadly, the anti-USA fetish among the left — including even what I used to think of as the intelligents in Canadian media like some reporters and columnists — is a perversion that is destructive to democracy, and divisive beyond the pale. Divisive and destructive here in Canada, to be clear.

If CTV “News” had any self-respect, they’d delete their tweet, thus hiding all those comments/replies. It would actually serve Canada’s interests to do that.

Proud to be Canadian? Yeah no. Not when I see this bullshit from so many Canadians.