Trudeau spoke at Euro Parliament, and nearly nobody showed up. Those who did, well… 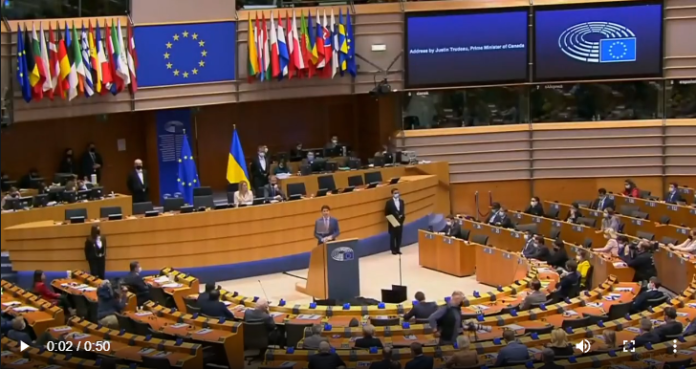 This was NOT the bonus photo-op glam tour Part Deux that Justin Trudeau and his Liberal Party herd, and his ever-loving “news” media division dutifully in tow, had in mind. 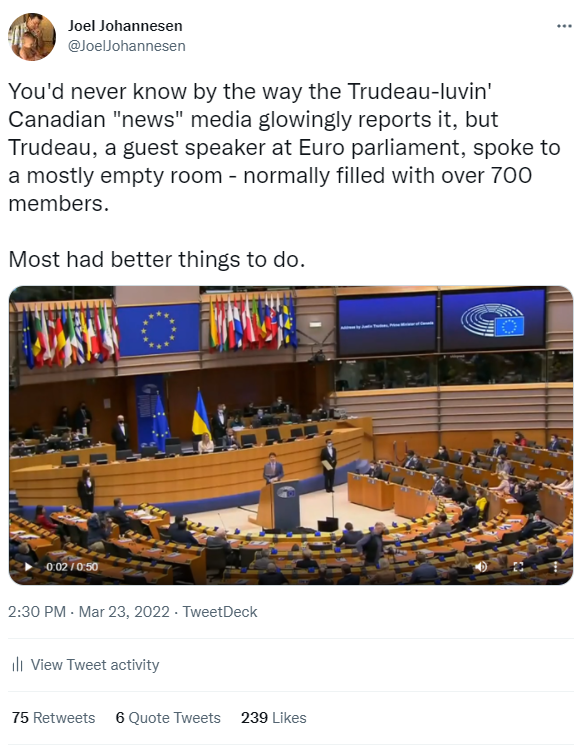 I don’t think one single European photographer took one single photo of his socks. Not one  Euro reporter asked him about his hair, or what his favorite yoga position was. So not like Canada at all! And so Trudeau and his sock selector-in-chief (Gerald Butts?) are right pissed. The Canadian “news” media, which excitedly boasted that they were going to “cover his trip,” which is actually left-wing media code for “covering his ass,” are all raging mad. Incensed. They’re now pretending they were really just there to cover the “war in Youcrane.” 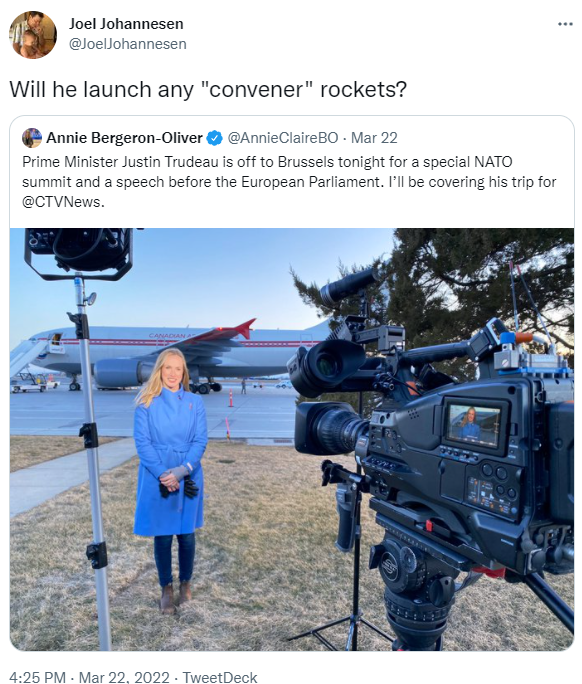 Jagmeet Singh is kinda annoyed or embarrassed at his pretty new wife Justin who promised Jagmeet that all the cool cats in Euro-liberal Europe’s big government circles loved him. “What a bitch,” Singh is heard by an unnamed source to have said.

The first clue I got that this was going sour was when I looked at the raw video of his much-ballyhooed speech (much-ballyhooed only by himself, and his ever-loving Canadian “news” media). What you saw on Canadian TV was mostly a lie, because the Canadian news media didn’t speak to the fact that actually, nobody showed up to listen. In a room with over 700 seats, a scant handful of people bothered to show up. Most chose this opportunity to get that root canal they have been putting off.

Those who did show up… whooo boy. They weren’t there to get his autograph. 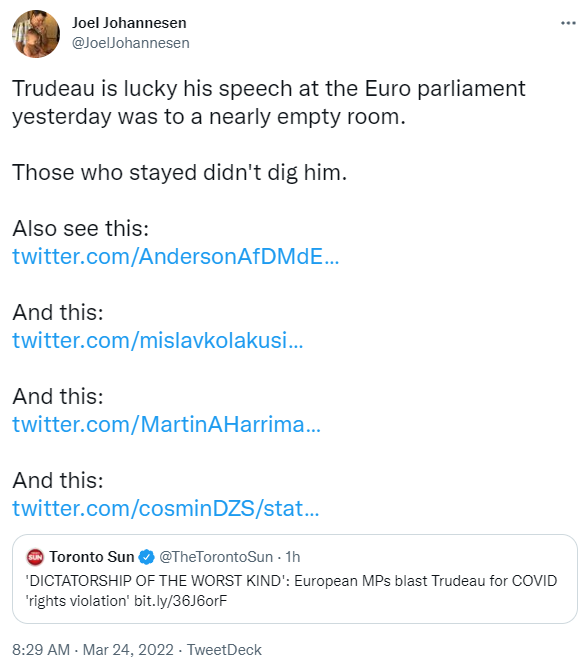 Click on that screencap of my tweet and watch what the Canadian media didn’t show you — because that’s the actual news. The dishonest left-wing Canadian “news” media buried the lead — because it didn’t fit with their pro-Trudeau narrative. This is exemplary of the “news” media’s perfidy. They didn’t show the multiple videos of Euro members of parliament slamming Trudeau as a charlatan and a poser; as a dictator (one guy said it right to his face), and as an authoritarian and an undemocratic party leader who literally orders his police to “trample on ladies” with police horses. And the German delegate said Trudeau was someone who should never have been allowed in that honorable chamber, and never invited to speak, and who should actually just leave.

I fully acknowledge I don’t know the politics of those who spoke so harshly against Trudeau and who took such offense to Trudeau presuming to lecture them on authoritarianism or democracy. And that matters on one level. But my point here is that there is, in fact, a notable number of “very important people” who are of this opinion, and these are democratically-elected people — Europeans — a group whom all progressives like Trudeau incessantly hold up as having a left-wing economic model to mimic, and moreover a liberal-left culture and leftist politics and to emulate in Canada (as opposed to those awful limited government conservative capitalists in the USA, some of whom dare to value their stupid “freedoms” and hold deer their dumb-ass “individual responsibility” and anti-government “independent initiative,” and such, and spell it check instead of cheque). Trudeau has blown the Europeans so many kisses, Jagmeet Singh was getting jealous. And yet this is how they repay him? It’s downright embarrassing for all progressives. And hilarious for the rest of us.

As Brian Lilley put it, “He’s running around the world warning against cynical politicians and polarization. Basically, @JustinTrudeau  says avoid people like him.”

Lilley’s right but it goes further: Trudeau and his ever-loving media touted this trip as another chance to presume to instruct the world on — and I’m quoting here, believe it or not — the creeping authoritarianism in the western world, and threats to democracy. Coming from Trudeau, this is pure projection and gaslighting, as some of us already acknowledge with despair. But what some didn’t know was the extent to which the rest of the world knew this. In fact, the rest of the world is likely better informed than we are.

To watch or read the biggest of the Canadian “news” media, including Trudeau’s very own state-owned CBC division, you’d think the world was enamored by Canada and its progressive prime minister. The reality is absolutely in stark contrast. This means the corporate “news” media in Canada — all now supported by tax dollars thanks to that very same Justin Trudeau weirdly enough — is misleading you. Misinforming you. Lying to you by omission or by not telling you the whole, unvarnished story. Not because they forgot or didn’t see it happening with their own damned eyes, but because of their own partisan political fixation. And that’s what actually speaks to a democracy in peril.