Trudeau/newspaper refer to Islamist terrorists returning to Canada only as “extremist travellers.” 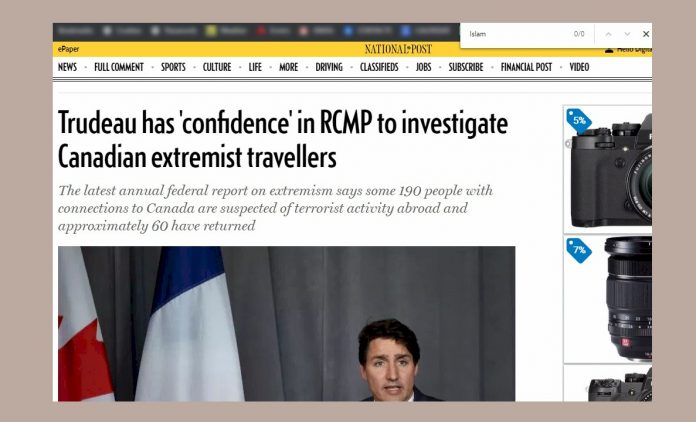 While liberals and the media have absolutely no problem smearing good, Canadian normals as “alt-right” or “racists” or “deplorables” or “white supremacists” or “fascists” when those people are, factually, none of those things, Justin Trudeau and the Liberals along with nearly all news reporters and editors can’t face real facts and eke out the words “Islamist terrorists.”

In reality of course that language is not used anywhere outside of the cadre of mealy-mouthed progressives in politics, the media; and no doubt, academia, because they know how important it is to teach your kids the correct mindset.

The word Islamist doesn’t appear once in the article. That’s part of the plan.

The unsigned Canadian Press story goes ahead and explains that what they’re talking about is residents of Canada (whom they, along with the Trudeau Liberals, all go ahead and presume to call “Canadians” — without proof or basis in fact, and without likewise presuming they were immigrants), who go to Iraq and Syria and Turkey to train with terrorists, support them, and actually fight alongside them, then come back here to do who-the-hell-knows-what.

The “extremist travellers” are defined in the story not as Islamist terrorist or terrorist trainees but, and I quote, “Canadians who travelled to fight alongside extremists in Iraq and Syria.”

Coming soon, some other progressive language manipulation in order to drive the agenda:

It’s all working out exactly as the progressives planned. The horrible mistreatment of some Indians by successive governments over time (unwittingly including Trudeau’s), has officially become named a “genocide,” and that finding is endorsed by the witless Justin Trudeau, who refuses to see the 100,000 Canadian abortions per year that way, and in fact insists that all Liberals — all Canadians — be pro-abortion and moreover, openly embrace abortion.

A good, solid, evidence and fact-based case could be made for calling these people Canadian extremist progressives, without any quotes.

Anyway, Twitter lit up* on the “Canadian extremist travellers” thing:

I don't know which is more pathetic, Trudeau because he can't utter the word terrorist or jihadist or Nationalpost for playing along.

Joining ISIS doesn't make you a "Canadian extremist traveller," it makes you a terrorist and a war criminal.

Is this alt-language?! People need to be insulted and outraged by this kind of deliberate deception and insult to our intelligence. At the same time we are called every heinous name in the book. FFS

Dear Trudeau, ISIS members are not going backpacking in the Rockies to be called “extremist travellers” 🤦🏽‍♂️ they are Islamic jihadi terrorists, whose self proclaimed goal is to kill all non Sunni muslims including Canadians. stop pandering for muslim votes https://t.co/Hm2rDtzSsv

* — No, I have not checked the accounts of any of the tweeters mentioned here for their past history, or to see if they are racists or deplorables; and I do not necessarily endorse any of them or anything else they have ever said on Twitter or anywhere else ever.

Previous article
Math-Challenged BC Teachers Teach Confirmation Bias, But Fail There Too.
Next article
Canada’s flight crews ordered: no pot-smoking for 28 days before duty. (Twenty-Eight Days!)