Trudeau Liberals encouraging Canadians to borrow money — from the government. 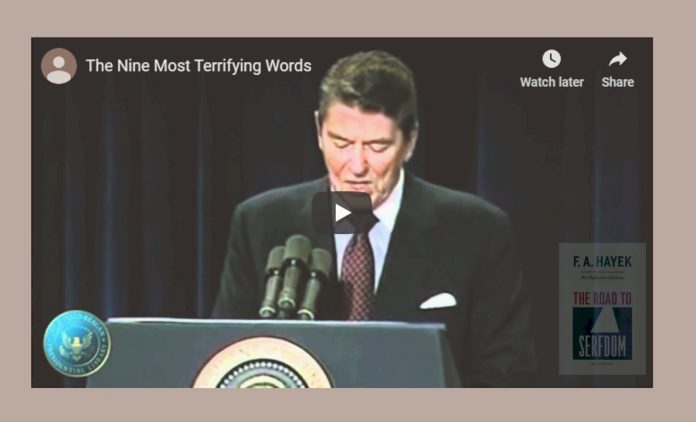 “I’m from the government and I’m here to help.” Ronald Reagan had it exactly right. Liberals learned nothing.

The Trudeau Liberal plan announced today to encourage Canadians to borrow money (up to $40,000) — from the government, just to help them meet their climate change goals, is horrible on multiple levels.

First, this is encouraging additional personal debt, increasing financial risk, and adds to the very economic stress that a year and a half ago, they mandated be lowered. The government policy a year and a half ago was to foist a more stringent set of rules that banks would need to follow to determine if you qualify for mortgage and for how much. Now it’s the opposite. Free money to borrow — from the same government.

They’re driving recklessly down both sides of the road.

Here are some articles about the impending personal debt danger, from the past few months:

Second, forget the additional financial risk that the Liberal government of Trudeau is encouraging Canadians assume. What about the principle of this plan? I’d love to know (because nobody bothered to ask and journalists give Trudeau and the Liberals a pass on everything) who exactly is going to be doing the actual lending of the money — them? The government? Are they taking over banking functions now? And what will they do about the people who fail to pay back the loan — will they repossess Canadians’ assets? Maybe they can do that while the police are at Canadians’ homes confiscating their guns! What if you’re just late? What will they do? They have all the power.

Third, This is also increasing Canadians citizens’ reliance on and dependence on the big nanny-state government. Which is terrible social policy. A government encouraging Canadians to go into more personal debt — especially to the government — is patently ridiculous, but to have them become beholden to the government in this way crosses a line. This is the opposite of what any government of a free nation should do. These people would have you be indentured to them — the government — and at their mercy. You would have to work to pay them off. This is literally the road to serfdom. It’s also literally the goal of progressive, or socialist, ideology.

Moreover, saying things like this is going to raise the temperature of those seeking logic, or, you know, honesty:

So they think an ever-increasing carbon tax, designed to raise the cost so that people use less energy, is good economics; but also a $40,000 interest-free government loan to “lower their energy bills,” so they can, if you follow the logic, use more energy, is also good policy. Pick a lane, Trudeau Liberals.

For their part, the Conservatives are promising to provide tax breaks to those who spend their money to make their homes more efficient. It’s far more responsible to help Canadians spend their own money by leaving more of it in their own pocket, than to encourage Canadians to get into hock — TO THE GOVERNMENT — to do it. Among other things, they’ve said this:

Trudeau’s green renovation plan will require you to be audited by the government, not once but twice. Andrew Scheer’s Conservatives won’t require the government to come to your house and tell you how to renovate your home.

Trudeau’s Liberals will even make you pay for one of these audits. …

Previous articleOur Very Own “We have to Pass The Bill Before You Can Find Out What’s In It” — NORTH.
Next articleAnother Police Chief Against Virtue-Signalling and Handgun Bans?