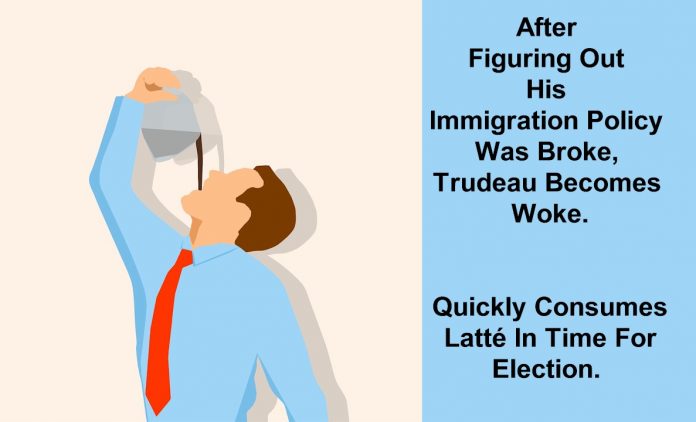 The Trudeau Liberals and most other liberals have been slow to awaken from their slumber and accept the truth about rampant and illegitimate asylum-seeking and illegal immigration into Canada, and into the U.S. through Mexico. Donald Trump saw the problem and campaigned on it and won. The Trudeau government has finally realized the problem and are looking into to fixing it — yeah, just in time for the next election, and after years of Canadians voicing their concerns (and being called “racist” by Trudeau). Some Mexicans have also now seen the truth of the gravity of the situation and are finally concerned. But there isn’t exactly a caravan of news reports about it.

But at least Trudeau’s finally waking up and smelling the latté, if only to hold on to his beloved power. So are some media. As a Globe and Mail editorial on Trudeau’s immigration problems, published two days ago, noted, “Over the past couple of weeks, the Trudeau Liberals have abruptly woken up to this reality.” Woken up to this reality, you say? Reality? Now? Four years on? Where’ve you been, news media? Apparently in bed with Trudeau, sleeping, not woken up.

This AP report today from Mexico, buried miles deep in just one tiny media site out of the dozen or more that I look at, as brief as any AP report I’ve ever seen, explains what some Mexicans — not Donald trump — are describing as an immigrant caravan emergency replete with problems. This “caravan” of migrants was, as you were originally told, a figment of Donald Trump’s “racist” imagination. That was according to various liberal media in the US, Canada, and abroad. They literally told me on CNN and at other left-wing media sources, that “there are no caravans!” Over and over. They mocked Trump for saying it. “Fear mongering!! Lies!! Racist!!” They literally said it’s not an emergency either. Then they suddenly woke up to reality one day and went ahead and acknowledged there were caravans of migrants, as if they’d always said so.

Here’s the AP today calling the formerly non-existent caravan into the United States a caravan right in their headline, with additional inconvenient truths (which have existed for at least two years). And it sounds like a Trump rally:

Posted Apr 16, 2019 10:02 am PDT
MEXICO CITY — Municipal authorities in the southern Mexican state of Chiapas have tried to block a caravan of about 2,000 Central American migrants from entering the town of Huixtla.

The Huixtla government declared an emergency Monday night and told stores to close when the migrants streamed in anyway.

Members of the caravan pushed past police and headed for the town centre, although authorities wanted them to stay at an improvised shelter farther away.

The municipality said in a taped statement that “the majority of the people coming are not coming peacefully, as we might have hoped.”

Officials also told people to stay indoors, warning the migrants were a threat to safety.

The town’s cold reception contrasts with the warm welcome it gave to caravans just last year.

The same sort of thing happened in the Mexican border town Tijuana several months back, during a previous caravan wave. Local authorities including the mayor there also emulated a Trump rally and called it a caravan, a crisis, an emergency, an invasion, and more, and explained how foreign criminal migrants were wrecking their town and putting its citizens in danger. The mayor there was quoted as saying lots more than just this rather tepid bit:

“Tijuana is a city of migrants but we don’t want them [arriving] in this way. It was different with the Haitians, they had [immigration] papers, [their arrival] was orderly, it wasn’t a horde, excuse the expression . . .” he said, according to the Mexico News Daily. “These people arrive in an aggressive, rude way, chanting, challenging the authorities, doing what we’re not accustomed to doing in Tijuana . . . I don’t dare to say that it is all the migrants but there are some who are bums, pot smokers, they’re attacking families in [the beachside borough] Playas de Tijuana, what is that?”

Yeah what is that? There are other reports, based on their personal experience as actual woken residents, in contradistinction to NBC or CBC reporters, saying the same. But if I understand the liberal media correctly, we are to believe these Mexicans are liars. Racists.

In America and Canada, progressives still don’t believe what their lying eyes are telling them. They won’t, for example, believe the AP report I posted here. For most of them, still, there are no caravans, there is no crisis, there is no emergency, the migrants are all innocent pregnant mothers and children, they just want to come and pay taxes and fight climate change, and it’s all good. Trudeau had to change his immigration policy only because things were too perfect.

Liberals in Mexico are slow too. According to that AP story, they “warmly welcomed” the “caravans” last year (why on Earth would they warmly welcome illegal aliens?), even after they had been warned by those in the know (notably witnesses, residents, Homeland Security, Customs and Border Patrol, ICE, and by one guy in particular). Then after that all worked out horribly for them, as many (notably, that one guy) had warned, and after trying it their way yet again, they seem startled that “the majority of the people coming are not coming peacefully, as we might have hoped.”

And these people call themselves “woke.”

This, for liberals and their media, is a slow rise from a long sleep dreaming their confirmation bias dreams. Conservatives have been awake for a long time and are on their third cup of coffee.

Previous article
Chinese Canada: An Alarmingly Casual Attitude of Acquiescence From Canadians
Next article
Why is Big Gov advertising on and sponsoring commercial sports?