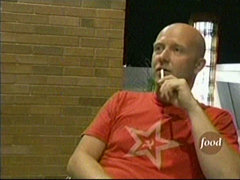 I noticed this last night as we were watching the Canwest-owned Food Network Canada’s “Top Chef” program and remarked on it to my wife who rolled her eyes.  But that’s OK.  I’ll point it out whenever I see it because I think it’s bloody awful.

A contestant wears a message t-shirt and rather than the usual corporate logo or rock star logo or Barack Obama glorification logo, his is a red t-shirt sporting a rendition of the old Soviet Union flag on it—the hammer and sickle logo inside a red star—the logo of the Communist Party.

I always notice how these shows blur out the corporate logos on t-shirts worn by folks caught in their camera’s lens, which I’ve presumed was done because after all, those companies hadn’t paid for the free advertising they get. Fair enough.  But they never seem to have a problem with the Obama t-shirts or the Communist Party t-shirts.

The Media Research Center’s NewsBusters blog caught it as well and wrote it up (in the U.S., Top Chef is shown on the NBC-owned Bravo cable channel, which is the original source of the show produced by Magical Elves Inc), following up on another instance where that exact same shirt was worn by a news reporter while doing a news report. 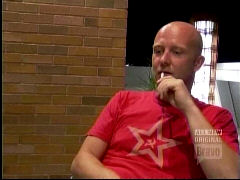 On Wednesday’s episode of Bravo’s Top Chef: New York reality show, “cheftestant” Stefan Richter could be seen wearing a red T-shirt with a gold hammer & sickle—the emblem of Soviet totalitarianism which oppressed hundreds of millions and murdered tens of millions—inside a gold-outlined Red Army star, matching the colors and symbols on the Soviet flag. In the scene on the NBC-owned Bravo cable channel, Richter, owner of Stefan’s European Catering in Santa Monica, California, was lighting up a cigarette as he argued with some other chefs in his contestant group over the elements of a meal menu.

This wasn’t the first time an NBC show has featured someone sporting the pro-Soviet communist shirt. Back in April of 2006, an entertainment reporter wore the very same shirt over two nights on the NBC-produced Access Hollywood.

[This item, by the MRC’s Brent Baker, was posted late Wednesday night, with screen shots, on the MRC’s blog, NewsBusters.org: newsbusters.org ]

Bravo’s bio for Richter reports he’s a native of a country long in the shadow of Soviet communism: “Stefan was born in Finland but spent the majority of his childhood in Germany” and in 1998 he was “part of the creative team for the opening of the Bellagio Hotel, Resort & Spa in Las Vegas.” 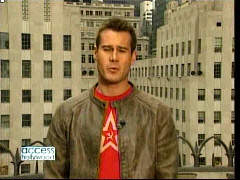 On Monday, for the second straight weekday, Access Hollywood’s New York correspondent, Tim Vincent, a veteran of the BBC, sported a hammer and sickle T-shirt as he introduced a story. Just as on Friday’s show, as documented in an April 15 NewsBusters item, though he wore a jacket over the red shirt with the symbol of the regime which murdered tens of millions and oppressed hundreds of millions more for decades, a gold hammer and sickle was clearly visible inside a gold-outlined red star which, sans the hammer and sickle, would match the Soviet’s Red Army emblem…

Canwest also owns the left-wing The New Republic magazine and web site which is prominent in the U.S.