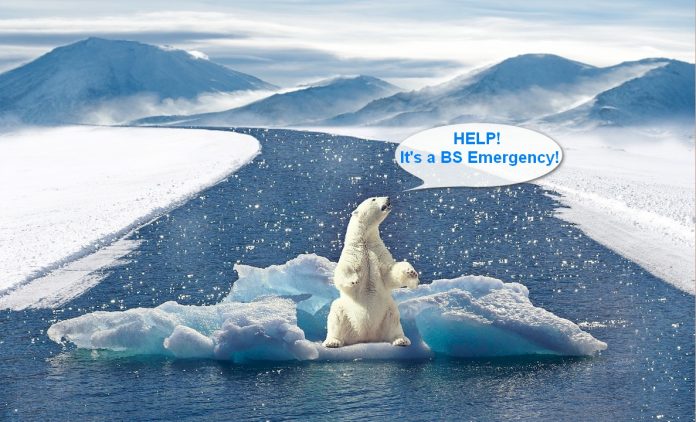 It’s undeniably hypocritical and deceptive and nasty and greedy and a whole lot more. You scroll through the Toronto Star’s online edition today, and among all the other headings (“Top Stories,” etc.), they have one called “Undeniable.” Yes, of course, it’s an ever-so objective heading featuring stories about climate change, named and framed tendentiously as a nasty insult to those of us they deem to be evil “deniers” — those deplorables who refuse to be led around like idiots, and who have not found enough compelling evidence proving that we’re doomed as a people and a planet due to “man-made global warming.” Therefore, people like us are required, by rigorous journalistic standards, to be labelled with the most egregious moniker, meant to invoke the thought of Holocaust deniers. Akin to one of the worst things in history. Making us out like human garbage. Based on science. And journalism. 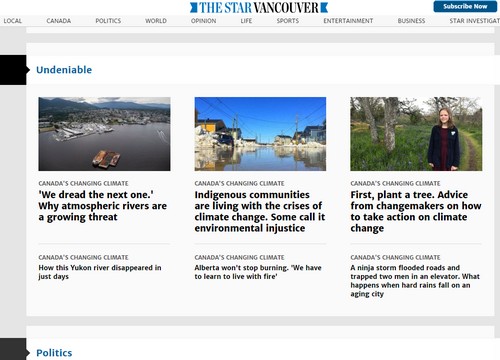 There are six stories there today, plus others in other sections, all designed to change your mind or reconfirm your belief in the man-made global warming ideology and its attendant left-wing politics including a total change of lifestyle, massive government policy shifts and government spending and government size increases, and of course much, much higher taxes, as the only solutions. There’s little “news” here, it’s a rehash, a retelling, over and over, of the same general story. This model of convincing is one favored by cults and propagandists, not scientists, or even journalists, but whatever. They’re the same stories we read at other mainstream news outlets. And it’s all the same claptrap our kids get fed at our public schools, and it’s what left-wing governments and politicians preach, and that which we hear from all the leftist activists, all presented in alarming fashion in the very useful mainstream news media, which the Canadian state will now fund, if they measure up to the state’s criteria. It’s as if they’re working together, which in almost every way, they are.

For now, anyway, they’re all privately-owned (except for the state-owned CBC of course), and it’s the Star’s right to be a left-wing newspaper, although I quibble with the term “newspaper” when it’s so obviously unobjective and so often propagandizing the left-wing gospel. (If West Bank wine producers can’t say “Made in Israel,” then the Star can’t call itself “an objective news media.” Left-wing logic has to apply to the left, too. That’s how fairness works). And it’s certainly their right to believe in what so many left-wing politicians and parties are also calling a “climate emergency.” Coincidences happen.

But then they can’t also have a whole news section on the excitement of cars and driving, right? Well no, you’d be wrong there. The rules apply to different people differently. They’re very excited about cars and driving at the Star.

He wants to take you for a top-speed ride around Mosport in an Infiniti Q50. Are you interested?”

“Is the Pope Catholic?” I replied.

That’s a line from one of their “AUTOS” section stories today, in which a reporter took a few laps around a track in a new Infinity Q50, which has a huge 3.0 liter, six-cylinder gasoline engine.

Their next story (“Special to the Star”), about the 2020 Corvette, tantalizes:

What’s not to like about the 2020 Corvette, unveiled last week in Tustin, Calif.?

…And I can’t wait to drive it.

Bet you can’t either.

I agree. I’d love to drive one. I’m on his side. Undeniably. (Not to be a scold, but I do feel compelled to add that these muscle-car stories not only help “end the planet” in this time of “climate emergency,” they also feed that massive “toxic masculinity” problem, too. But that’s another fake news story.)

The other AUTOS article today deals with the giant, oversized, powerful new gas-powered SUV from Hyundai.

…aimed at career-oriented younger people who would rather wield a bigger, taller, thirstier vehicle around crowded city streets than a more agile, more fuel- and emissions-efficient and cheaper-to-run station wagon.

Which is just about everybody, these days. …

I wonder if Toronto Star writers love battery-powered cars too. I mean if that’s what the AUTOS section was all about, it might make more sense, at least to them. Here’s a line from another recent story:

…You all know as well as I (well, some of you less so) that battery-powered electric cars will never be more than bit players in the total vehicle market. …

Oops. Not so much into the battery-powered car thang.

So nope. Sorry, Star. Can’t have it both ways. In a “climate emergency,” you cannot also promote the excitement of 496-horsepower cars. Just for the money. You’re a media outlet touting (promoting, advocating for, propagandizing, pushing…) the “climate emergency” and all its attendant left-wing, sometimes outright socialist and lifestyle-changing policies. How does this overt hypocrisy — and what is obviously plain capitalist greed — jibe with that? That aint very sciency! Not demonstrative of any real concern for the “climate emergency.” Or liberal-left politics, for that matter. It’s taking advantage of the capitalist system to enjoy profits stemming from our usual way of life rather than the “climate emergency” style of life which, make no mistake, includes NOTHING like Corvettes, any SUVs, or sporty cars with 3.0 liter gas engines.

Nor the myriad ads for them.

They know full well that their “climate emergency” dictates they abandon their AUTOS section and lose that audience, and the income generated from all those car ads. And then they’d also have to nix the air travel ads. And cruises. And shipping. Hamburgers. And really, most everything. And they know they’d personally have to stop enjoying those “bad” lifestyle choices too, which they won’t.

“I can’t wait to drive it”? Yeah no, the Star is a whole lot less Catholic than the Pope.

They don’t really believe anything they say. They’re full of it. They’re on an ideological left-wing propaganda spree. You shouldn’t believe this “news” either. You probably don’t.

They can compare me to garbage humans all day long. But this garbage makes the Toronto Star a total garbage newspaper, and not a bit helpful to the environment — the natural environment or the political or cultural. The Star is in an unholy union with all the other mainstream media and lefty politicians, who do almost the exact same thing: squeezing out fake tears about climate change, yet enjoying to its fullest all the monetary and leisurely riches said (by them) to be associated with climate change.

It leads one to think we’re in a total BS emergency. Undeniably.

Previous articleThis is a good post because I want it to be. I always said it was. So it is.
Next articleQUESTION NOTHING. That’s how we got here.