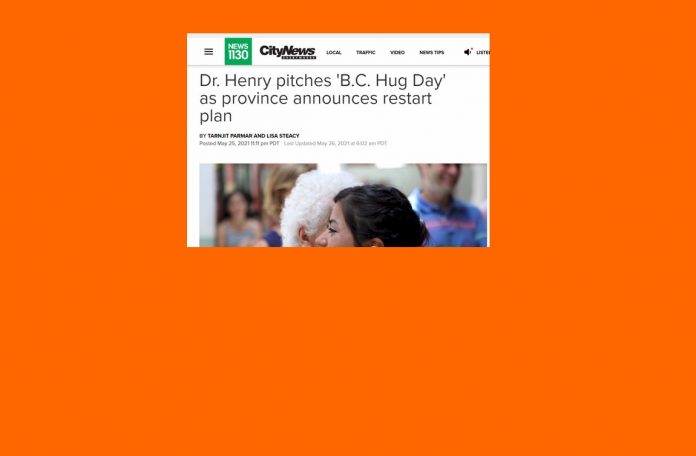 In case you were wondering if the “progressives” or the “democratic” (wink!) socialists and their left-wing media have learned anything about the creeping governments crossing the line and becoming permanent authoritarians and totalitarians over the past year, here’s the first line in a “news” media story today, which I stress is being reported unironically and uncritically on a news radio station’s Web site:

VANCOUVER (NEWS 1130) — B.C.’s top doctor is pitching a new holiday as the province embarks on its plan to return to pre-pandemic normal: Hug Day.

So no, no they have not learned a single thing, in fact they are doubling down. This is epic nanny-state maternalism. Aided and abetted by the “news” media.

And it’s emblematic of a broader, very serious problem (to say nothing of their having zero self awareness. I couldn’t presume to say such a tone-deaf thing in public even if George Soros was paying me a million dollars).

The bureaucrat, Dr. Bonnie Henry, is pitching, to the premier, an official government-sanctioned “Hug Day” holiday, because, as you folks who escaped from North Korea and Cuba all know, you must not entertain the notion of hugging your son or mom or daughter or father —until the government officially authorizes it. 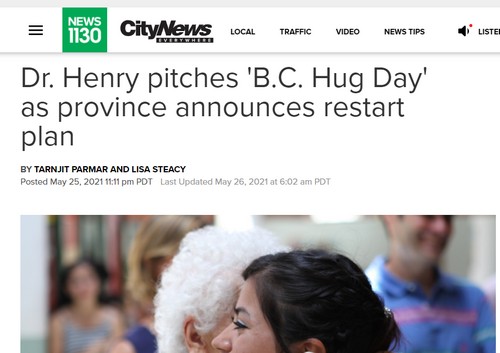 Just as Thanksgiving isn’t really a thing until you spot one of the many quarter-page ads in your newspaper from all of the many elected officials each proclaiming “Happy Thanksgiving!”, it can’t officially be happy unless or until the government says so. The government MUST insert itself into you life and your family’s life, or it just isn’t your right. You must NOT — I implore you — MUST NOT act on your own volition in ANYTHING you do, in today’s strict government “emergency”-controlled “Covid” (not Wuhan Virus —wink!) environment.

One of the story’s reporters (it took two, apparently, one of which graduated with a Bachelor of Arts in Women & Gender Studies), naturally took to Twitter to further advance the government bureaucrat’s pitch, because that what reporters do now. Note the cute and ever-so adult emojis of a smile and a hug — very thematic! — from someone who describes herself as a reporter and not a government spokesman:

You might also note the fun little poll going the wrong way, which I think has everything to do with folks saying shove it to both the nanny-state bureaucrat, and to the sycophantic reporter. Also note how, being so uncritical, the reporter entirely misses the point, which is not whether or not people “Love Hugs!” (quite frankly, who gives a shit?) but whether the damned government has any damned business invoking what could only be described as unbelievable meddling in your private lives and in your natural behaviors as human beings living in a free country. She missed that the government is presuming to give official license… to hugs, and the inherent government overstepping contained therein? Dear God. And the part about the bureaucrat proclaiming this idea to be so grand that it needs to be a freaking national or provincial holiday?

As serious people know, even those without Women & Gender Studies degrees, this is actually yet another story about the now dangerous expanding bounds of government, their crossing of the line, and their (as is painfully evident!) increasing paternalism or maternalism, its busy-body meddling in our private affairs, its interference in our very personal relationships(!); and manifestly it’s about their obvious addiction to, and apparently their ongoing aspirations of, outright control over our lives writ large.

This is no exaggeration or joke: the government bureaucrat felt the need to issue forth a government decree, stipulating that you can hug grandma, and is quoted, again unironically and uncritically:

“If your grandparents have been immunized then they’re going to be part of your social connections again, you know each other you know what the risks are — now’s the time where you can get together, you can hug again.”

Here’s a counterproposal: I do whatever the hell I damn well want with my wife or grandma or friends and neighbors, and you can pound sand. As you hilariously and ironically let slip yourself, “you know what the risks are.” Indeed we do. Always did. Because we’re not your babies. Nor stupid.

But as if I had to tell you, readers, with her “you may hug” government order, B.C.’s self-appointed new meema, Dr. Henry, is quick to advise caution, as she is ever the woke scold:

“I’m thinking, by the time we get to July, if things continue in the way that we expect, that we’ll be able to hug our neighbours again — if they’re people who like to be helped. I mean we have to understand that not everybody does,” she said.

So perhaps one should ask for a written waver prior to hugging your neighbor, signed off by a government official, lest one be brought up on some damn “me-too” charge or what have you. Then the police and more government would have to get involved! Whooboy.

Long gone are the days when the news media’s job was to be critical of those in power, always questioning their authority and their policy choices or pronouncements, and watching out very carefully for any intrusions into our freedoms and the enjoyment of our free lives. No, today, they act as their official stenographers, their public relations conduit, or even the advertising division of Big Government —uncritical, unquestioning, and in fact promoting the government’s freedom-challenging edicts. (Well, that is to say that the “news” media act this way if Big Government is left-wing Big Government, as is currently the case in B.C., which is (pretty literally, as evidenced here!) under the thumb of the “democratic” (wink!) socialist party, the NDP.)

Let’s play Can You Just Imagine… if this were a conservative, Conservative, or Republican party in power…oh my. The outrage from the “news” media at this intrusion into our lives would truly be, well, Trump-era-style epic. They’d be parsing every word. Getting analyses from freedom and constitutional and morality experts. Lawyers would be questioned. Professors galore too, whom I could well imagine providing us with their subtle innuendo implying that the tactics being employed here were being done by dangerous “authoritarians” in an increasingly “totalitarian” government, putting at risk democracy itself.

And so the news media should. Done right, and fairly, that’s their job. And no, they wouldn’t then, nor do they now, need to wait for a permission slip — or a hug — from meema to do it.