Newsquips entries are updated through the day.  Come back often, refresh the page, post comments.  … $$ UPDATE $$ on PTBC life-sustaining cash support:  From Wednesday of last week (last such update) through Wednesday of this week, a total of—get ready—$5 was contributed from readers.  That $5 was from Dean J. of Stratford Ontario … And if it weren’t for Dean J’s contribution, I might have shut the doors.  Then yesterday Matt B. of Kanata Ontario sent a check for $100, which floored me.  So thanks to Dean and Matt.  I really appreciate it a lot.  I imagine a few other people appreciate it too, in an ironic twist.

1. National Post can’t quite say it.  As I mentioned yesterday, Bush said at the G20 meeting that “capitalism works”.  The supposedly conservative-friendly NatPo obviously saw this statement as somehow remarkable, newsworthy, astonishing and perhaps even galling, and they made it front page news today.  The idea that they think it is so remarkable betrays just how far Canadians have moved from a healthy appreciation of the normal freedoms of capitalism and free markets and conservatism, and toward big government nanny-statism.  … Note that the NatPo doesn’t itself have the nerve to say, you know, “it” —they can only quote Bush saying it.  “Capitalism works: Bush” blares the headline.  … Of course the CBC wouldn’t even go that far —not without a visible sneer or a sound mocking.

2.  The state-owned socialism-reliant CBC:  Stuck on dismal, pre-Obama presidency.  I’m almost looking forward to Obama being sworn in so CBC will cheer up and stop with their massive economic meltdown and recession promotion campaign.

3. CONTRA BUSH:  Like the CBC, Canada’s Conservative Minister of Finance agrees the financial mess is all the result of too little regulation.  Upon hearing the news, Jack Layton reportedly experienced a small orgasm.  … Just yesterday, Bush, almost a capitalist, said the opposite.  Bush was right.  Liberals and their meddling in free markets and their social engineering projects and their over-use of horrible regulations and their vote-buying at any cost, caused this.  But potatoe, potattoe.  As long as you suck up to the liberal-left in this country, it’s all cool.  Whatever you do, don’t stand on principle.  Or reality.  Or capitalism.  It so wrecks government growth and power over us!

4.    Oh those fun liberals and further leftists and their quiet and purposeful decimation of Canada’s national defenses over the decades in what some would call treason! — Two of Canada’s supply ships, the HMCS Potecteur (note the French-based name) and the Preserver are more than 40 years old now.  The Preserver alone required $17.4 million in repairs since 2005.  Documents list 49 pages of repairs to antennas, valves, air-conditioning systems and radars.  What are they

trying to do —mimic our decrepit North Korean-style healthcare system?  … FUN THOUGHT OF THE DAY:  You know how liberals and leftists today are (even more than usual) all over the concept of those specious government public works projects (read: almost useless make-work, government-growing, and spending money like wild monkeys on crack projects) in order to (*cough*) “stimulate the economy” (and “justify” raising your taxes)?  Ask them about spending a few billion dollars and possibly creating thousands of jobs (through private sector contracts) bringing our Navy and Airforce and Army into the 21st century… and watch as they twist and squirm and tremble and stutter as they choke and practically gag themselves to death and totally reverse their positions on government spending and make-work and public infrastructure projects in “these terrible economic times” where (suddenly) you’ll hear them tell you that cutting government spending is de rigueur (and they’ll actually slip one o’ them French words in there, I guarantee it).

5. The extreme, often full of hate, far-leftist CBC fans are all over the reports of Canwest, owner of Global TV and a dozen liberal Obama-luvin’ newspapers like the NatPo and the left-wing American The New Republic magazine (see item 2 in yesterday’s NewsQuips) and the horrible financial morass they are finding themselves in these days.  Actual posts:  HappySmiles wrote:—  Canadians don’t need or want private propaganda corporations. Canwest can evaporate for all I care. 73 People recommended this comment … Don’t worry, that sentiment is only repeated about 8,000 times by the freedom-loving and not-at-all communist CBC fans.  Another one, “baltzera”, wrote, “Who cares about the right wing fanatics. How [hope?] they all loose their jobs and AND go bankrupt.”

6. CBC FAINTS, RECOVERS:  During a news conference this morning in which he indicated that some Canadian government assets might go on the auction block, and Canada’s left-wing instantly, reflexively assumed their high dudgeon.  Canadian Finance Minister Flaherty was asked by a nervous reporter whether one of the assets under consideration for sale was the state-owned, state-run CBC far-left behemoth (“far-left behemoth” being my term—theirs was more like “sacred darling of our national identity as a socialist progressive collective”).

… He answered: “no”.  But it certainly woke up the the CBC fans and the far-left citizenry of Canada from their naps on the couch.  NO MEANS PHEW!—According to the CBC web site itself in their fear-induced (to the far-left) news report which saw fit to report that it wasn’t itself for sale:  “Flaherty did rule out an auction of the Canadian Broadcasting Corporation, which draws $1 billion annually from the federal budget.”  …  That didn’t stop the far-leftist CBC fans, who went rank at even the very IDEA of such a thing.  More than 600 rabid CBC fans have posted comments on the story, at last glance.  They’ve now mostly re-assumed their cozy positions on the couch, however, confident in the fact that the CBC and its owners, the government of Canada, will continue to compete against its own citizens in businesses for profit, as citizen-owned TV networks lay off hundreds of people to stave off bankruptcy.  …
Some federal government assets (Crown “corporations”) 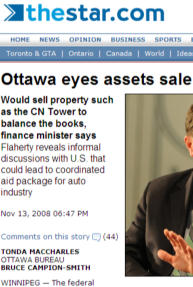 7. STAR LIES  —The liberal-left’s Toronto Star division chooses to totally lie to Canadians today in order to advance their agenda of creating a national hate-on for the Conservatives.  Their headline currently reads “Ottawa eyes assets sale –  Would sell property such as the CN Tower to balance the books, finance minister says”  Their reporting (by two reporters, Tonda MacCharles and Bruce Campion-Smith, because the story is so complex) even stated it right up front:  “The federal government is looking to sell capital assets to help balance the books, a sale that could include the CN Tower, Finance Minister Jim Flaherty said today.”  They then added, “Asked if the CN Tower is for sale, Flaherty quipped, “You want to buy it?” and chuckled heartily.”  But actually that’s a lie by omission.  In actual fact, he added this right after that:  “No, it’s not for sale”.  But nice alarmist bullcrap, TorStar!  … Here’s how the other media handled it:

• CBC article:  When asked if the CN Tower was for sale, he quipped, “You wanna buy it?” quickly adding, “No, it’s not for sale.”

• Globe and Mail article:  “At one point, Mr. Flaherty suggested a selloff might include the CN Tower in Toronto, but quickly ruled it out, acknowledging he was joking about putting it on the block. …  Pressed on the tower, he asked: “Want to buy it?”  Then he quickly added: “Naahh, it’s not [for sale].”

• National Post article:  [In caption beneath a CN Tower photo:] “Don’t worry the CN Tower is off limits.”  [And in their article:]  “Mr. Flaherty quickly clarified that the CN Tower is not for sale.”