Newsquips news brief— Newsquips are updated all day, unlike any semblance of fresh thinking from Canada’s stupideratti.

1.  Turns out the column, by achromic Vancouver Sun columnist Barbara Yaffe, is as vacuous as the headline, and indeed the Obama campaign.  Only those who are easily impressed by specious talk and simplistic liberal Utopian politics of “change” and “hope” and even “believe”, would ask the question being asked here.  I think these are the same people who scream about the virtues of maintaining a state-owned media, the CBC, and taxpayers paying billions to “artists” in Canada in order to establish and then nurture and grow a politically-created “Canadian Culture” at the highest state level, only to then repeatedly ask things like “Where is Canada’s Obama”, and repeatedly refer to the heavily taxpayer-subsidized movie industry branch plants in Vancouver and Toronto as “Hollywood North”, in lieu of anything organically Canadian.  And God forbid (or more likely, “humanist forces within” forbid) any one of these liberal vacuums ask the more salient question, “Where is Canada’s Ronald Reagan?”, since that’s who’s actually missing, rather than the one with the easy answer.  Where’s Obama?  He’s all around us for crying out loud. 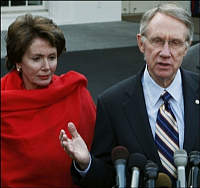 3. Spare some (pre-Obama “change”) change? —  America’s DEMOCRATIC PARTY-controlled Congress (they control both the Senate and the House), which has been suffering historically low approval ratings of 18.4% —making even George Bush with his low ratings look like a rock star by comparison —has seen fit to give themselves some pre-Obama change, change …a $4,700 raise!  mmmBut everyone else should cut back.  And you private-sector executives should work for $1 a year.  mmm hmmm.  We all agree Barney Frank should get a raise, don’t we?  … They are SO in touch with the folks, liberals are.  (™ liberals and their media)

4.   The priorities of America’s Obama-voting far-left don’t even remotely include one of the most vital functions of modern America’s government: national security, protecting the borders, protection

against the very real potentiality of more terrorist actions against America and American families.  Maybe the left-wing fundamentalists really do believe that simply by virtue of electing The Great Obama, the world will magically “change”.  Here’s the results from the George Soros-supported far-left MoveOn.org and their supporters, who were asked what they think the priorities for Move-On.org should be for 2009.  Their priorities all tilt toward some sort of socialist government-focused Utopia and a very divisive, politically-charged, government tax-and-spend, left-wing battle plan.

6.   Just don’t call her a c-anything, because that’s rude, sexist, anti-women, and so pre-Obama.  One of the Canadian state-owned media’s favorite web sites, the CBC’ beloved Huffington Post, strains credulity once again as its very arrogant zillionaire owner/author/editor continues her propensity for lobbing cheap personal insults at America’s Republican leaders and any old conservative icon whose name she can pronounce; and to be as potty-mouthed as a longshoreman.

She does this even while pretending to be a serious journalist and political know-it-all who vociferously supports Barack Obama in supposedly bringing in a new era of “concentrating on serious issues” instead of “shouting at each other”, and bringing about American and world “unity” and “inclusion” and “reaching across the isle”, and “post-partisan politics” and “inclusion” and “tolerance”, etc.

In another of Arianna Huffington’s, bizarre, typically awkward and almost Rosie O’Donnell-esque scribbles, she calls both Vice President Cheney—and Clint Eastwood (he’s a non-liberal-leftist, the ass!)—“dicks”.  Since Clint Eastwood isn’t known as Richard anything, she clearly means to make clear that she thinks they’re both “dicks” in the male appendage and vulgar context, feeding the notion that perhaps she suffers from some sort of envy syndrome, or that she is frustrated at her inability to have full control over one of those.  And possibly it also tells us that Arianna Huffington herself “always seems on the verge of telling people around them to go fu** themselves,” —almost exactly, in fact, to the word, as Barack Obama’s Chief of Staff in waiting, Rahm Emanuel and what he ACTUALLY said (to wit, “Republicans can f_ _ _ themselves”).  But like Rahm Emanuel, Arianna Huffington means that only Republicans should go and do that.    So much for “unity”.

Previous article
Peace, Goodwill, and Fun for All
Next article
Let the children play