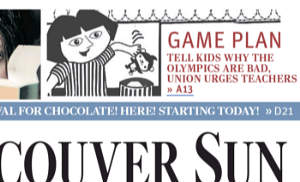 …and the BC government, which has put itself in charge of teaching the kids in our public schools (actually, in our private schools and the home-schooled kids as well), seems perfectly OK with it.

Apparently the overtly politically left-wing — possibly Marxist — teachers’ union is now in charge of what to teach our kids.  I did not know that.

Of course we did vote for Liberals to run the asylum.

B.C. teachers are being urged to expand their lessons about the 2010 Olympics beyond government-approved curriculum to teach students about corporate greed, exploitation, misuse of public funds and environmental degradation.

The Vancouver Elementary School Teachers’ Association (VESTA) is promoting an event later this month called Teaching 2010 Resistance, which is intended to help teachers raise critical questions about the Olympics.

The event, at Lord Strathmore elementary, is being organized by the Olympic Resistance Network (ORN), which is coordinating anti-Olympic efforts, and Teach 2010, a website that encourages teachers to share resources critical of the Olympics. …

You already know this: I’m not a fan of the government games — the Olympics — but my objections are based on some sound reasons built around my abject distaste for big liberal-left “progressive” governments and their big social engineering and big-government-growing projects and programs and the accompanying taxing and spending and meddling in the free market and in our communities and families and education and meddling where they don’t belong as a general matter, for example.

But for the radical left-wing political party operating under the cover of the various BC teachers union associations, who sound very much like communists to me, they seem to oppose the Olympics because like so many extreme leftists, they actually see it as a right-wing corporate conspiracy of

some sort.  These people are so left wing they’ve fallen off the political spectrum and see anything that’s not overtly deep red communist, as “right wing” and “corporate” and possibly “capitalist”, which we (and of course your kids) are to take as inherently “bad”.  These are the kind of people who think the media is “right-wing”.  Hugo Chavez and Fidel Castro are their political heroes.

So the teachers association in Vancouver is apparently joining forces with another radical left-wing or “progressive” organization in order to learn tidbits from them to teach your kids and our kids, presumably after they’ve taught their others lessons about capitalism and free-markets and free-enterprise and conservative politics being bad, and how to put a condom on, and Johnny has two mommies and a “daddy”, and the directions to the local abortion clinic, and so much more (or is it less?).

But a quick peek at the “resources” the union is promoting show us that the teachers are willingly hooking up with another bunch of radical communists.  This time they’re native Indian communists, which adds a neat multi-cultural “mosaic” and “diversity” tinge to it.  Don’t take my word for it.  The bizarre scare-quotes around BC are theirs:

The Olympics Resistance Network is primarily based in Vancouver, Coast Salish Territories and exists as a space to coordinate anti-2010 Olympics efforts. In doing so, we act in solidarity with other communities across ‘BC’ …

All this time I thought I lived in BC, but it’s actually Vancouver, CST.  I wonder why they don’t put quotes around Vancouver.

As I alluded to, these aren’t merely communists, but radical communists.  Not merely Marxist-minded, but actually radical revolutionists.

Again, don’t take my word for it: Here’s what’s atop the contact’s website donation form…

The word “radical” and the notion of being “radical” is a badge of honor for them, and it appears all over their website.  They seek to overthrow capitalism and our way of life by means of radical, and possibly riotous, revolutionary “change”.

The contact for the group is [email protected]  Seems to me, Rise Up is a radical communist organization and meeting place for far-left and anarchist and revolutionary groups who hate Canada and America, and seek to change us all to the communist nation they so yearn, by whatever means necessary.  These are some of the same people connected to the riots in Seattle, the APEC protests, various G-8 summits and other big events.  At Rise Up the teachers and others like them can find technological facilities to advance their various quasi terrorist riots, and protests and demonstrations.  Great quotes from that riseup.net website:

“We do this by providing communication and computer resources to allies engaged in struggles against capitalism and other forms of oppression.”

“Riseup.net affirms common cause and solidarity with a broad spectrum of the political left.”

And these are the people our teachers are associating with, getting “resources” to teach our kids, at the direction of the union bosses at teachers’ union HQ. 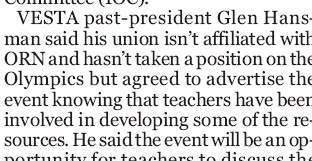 A part of a sentence in the Vancouver Sun article stands out for me.  It speaks to the “resources” the teachers are learning from these radical communists, and from whom these “resources” came:

”…teachers have been involved in developing some of the resources.”

Well then it sort of begs the question doesn’t it?

This is public education and big government and your tax dollars at work today.

Vote liberal and left and “progressive”.  Get more of this.