Heard on the state-run CBC Newsworld (all news, all the time) channel (so you know it’s (a) “news” and (b) important for Canada and (c) being from the state, it’s gotta be true, and valuable for Canadian consumption on an intellectual level):  A new CBC TV series starring one of the CBC’s state-employed jokers or so-called “comedians” named Mary Walsh (so-called “comedian” by the CBC itself, of course—but as a Canadian with taste I can’t personally attest to her being in any way funny even though I am forced to pay her with my tax dollars to amuse me and my compatriots) asked for 500 folks in Newfoundland to show up at an outdoor spot and to then strip totally naked for the CBC cameras, yet again.

SIDEBAR NOTE:  This is only the most recent in a very long list of blog entries about which the CBC has delved into nudity and/or pornography and/or sexual themes, or the like.  Recently, a “news reporter” injected herself into a story and ended it actually doffing all her clothes and blotting the screen with her own nudity.  I am working on assembling as many of my CBC-related blog entries into one category which allows me to provide on convenient link to them for all Canadians, but I’ve now decided to also created a sub-category which assembles just the ones which expose the CBC’s propensity to exhibit pornography and gratuitous sexuality and nudity and/or lewd themes.  I believe it will expose their obsession.  This little project will take some time as there are so many such blog entries to categorize.  Send money.

Only about two dozen (seemingly mostly fat old people) showed-up, but that’s OK because the CBC likes to shoot naked people from as close as possible without pubic hairs literally scraping the taxpayer-owned camera lenses, so it looked like there were lots of naked people.  (As usual, whenever the call goes out—normally from some nutbar and self-proclaimed “artist”—who is inevitably fully government-funded—the people who show up for these nude shoots are all the community’s fattest, oldest, personal grooming-challenged, or butt-ugliest people.  All the women seem to have copious armpit hair, and it always appears to me that from appearances alone—to say nothing of the smell which I mercifully know nothing about—few of them have showered in days. I guarantee you none of them vote conservative in any election, ever, and I’ll bet few of them pay taxes.

Here’s a screen-capture of the valuable Canadian culture (which even the state-employed CBC’s state “comedian” acknowledges was an idea modelled after an American “artist’s” idea. 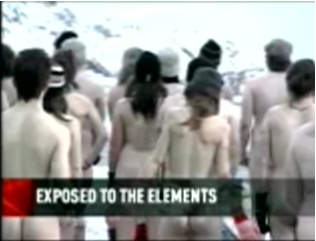 Please note that despite all the “man-made global warming”, the nudist nutbars all complained about the bitterly cold weather.

The state-run CBC and the people who work there, as I’ve shown over and over, are obsessed with showing full nudity, and crass, cheap crap-posing-as-art, repeatedly.  On “Newsworld” and on the normal 800 other CBC channels nation-wide.  On your dime.  On national television.  They’re really raising the bar over there at the state-run state-owned state-funded CBC!  Providing Canadians with a much-needed government service.  Living up to their mandate.

It seems to me: they keep trying —and they have for years— to break down the last remaining barriers of decency and to continue to lower the standards of broadcasting; They dig, hit bottom, then dig some more;  They tear down the church—even at Christmas, they build up pot smoking;  They tear down conservatives, they build up liberals and socialists and other “progressives”;  They append “so-called” to the term “war on terror”, but ensure that there’s no ambiguity on “man-made global warming” by talking it up 800 times per day (even while accepting ads at their multi-gazillion-dollar web site for jet-fueled vacations in far-away places);  They tear down morality and standards at every opportunity (or invent new opportunities using their state-funded creative genius as above), and they promote gratuitous nudity, cheap valueless entertainment, radicalism, and anti-establishment behavior;  Nearly every single thing they do—every word, every news report, every documentary (or repeats, as in the case of the Michael Moore documentaries which have been repeated 8,000 times), every “special” they produce—seem to come from a liberal-left or far, fringe-left political and social standpoint.

I could go on, but since I’ve already written tens of thousands of words exposing the CBC for the disgrace and embarrassment and for the damaging to our national psyche and culture agitprop institution that it is, only abject far-leftist/socialist sycophants and totalitarians without standards do not agree with me by now that state-owned and state-run media should be banned in this country, and that notion enshrined in our constitution. 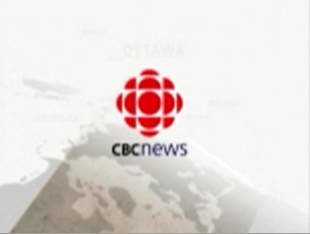