Seems every day is another day of shame for Canadians, for one thing or another — whether it’s our “genocidal” tendencies, our “racist” manner and history, or our failure to adapt to the climate change orthodoxy of the green mob. Then again that’s a Canadian — our prime minister — who’s shaming us that way. It makes me decidedly not proud to be Canadian when I open my daily email update from the National Review to be greeted with this corruption news in Canada story —about him: 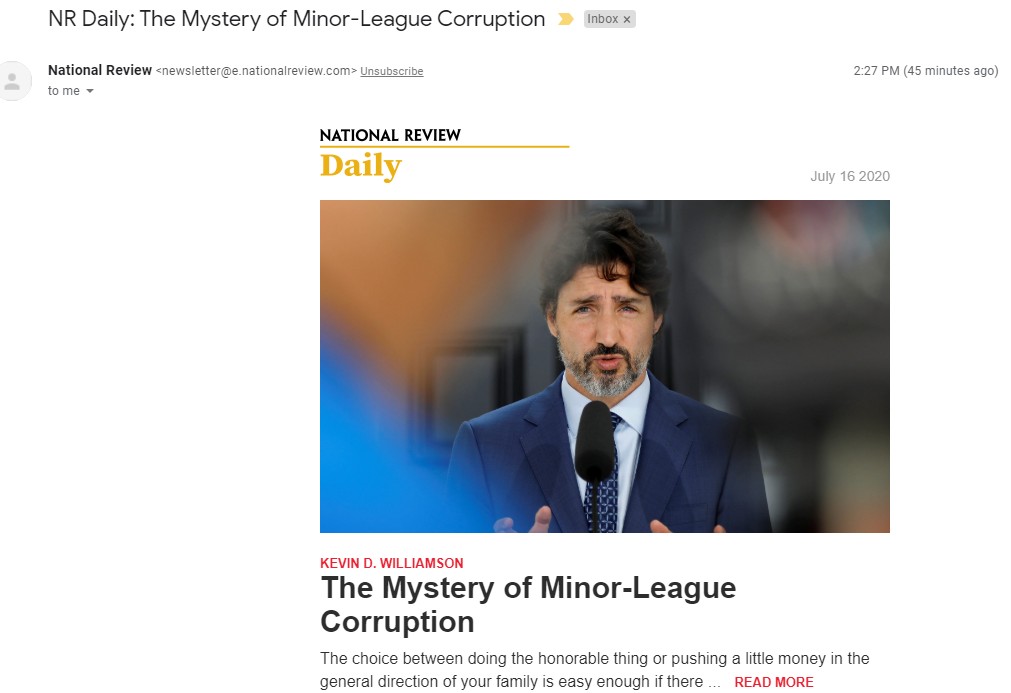 But shamed though I am, it is a very smart take by writer Kevin D. Williamson.

“…My pet theory is that this kind of petty corruption in politics is driven by two factors: The first is that the stakes are only petty on the politicians’ side — that Canadian charity that paid sundry Trudeaus for speeches got a $900 million contract. Throwing a few fruit baskets at Canadian MPs or American congressmen can be a pretty good investment, if you know how to play it. Some of those politicians are going to take those fruit baskets.

“The second factor is the same one that drives much of our class-warfare politics: the fact that many influential people, especially academics, politicians, and media figures, are socially adjacent to people they are not financially adjacent to. The Trudeaus are comfortable, but the Aga Khan has a Caribbean island of his own, a pretty nice one. Justin Trudeau lives in a duplex, and the Aga Khan . . . does not. …”

I would just caveat it with this: petty though it may seem on a global scale or as compared to the massive shysters of the world, here, it really is more “big-time” than merely petty, if only due to the repetition of it. The repetition of these corruption events bring with it normalization in the minds of the increasingly weary Canadian public — and the population obviously becomes jaded. I could write a whole other essay on the phenomenon of the news media’s apparent boredom — and easy forgiveness, excuse-giving, and defensiveness — on the part of the media with regard to any incidence of Trudeau’s corruption. They now lose interest roughly one to four days after each one. A loss of trust in government is a key problem for any democracy. As we’ve seen.

Read it, as you won’t find this kind of intelligent, critical writing in Canadian liberal media.