Too much talk of Hillary Clinton being ill (and more to the actual point, lying about it) has caused a giant panic attack at the state-owned CBC. They did an official state media “Analysis” about this concern. 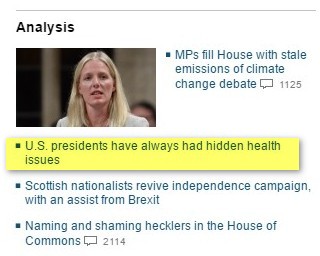 Here’s how the article begins:

Some critics have questioned Hillary Clinton’s fitness to be president of the U.S. because she came down with pneumonia. You gotta be kidding!

The state-owned CBC starts a supposedly serious “analysis” in this way, and WE’RE the ones who “gotta to be kidding?”

Even without a state-financed analysis of the situation, the CBC knows only too well the problem is not pneumonia (or even “the ‘flu,” as Bill Clinton tried to lie it off) — it’s Hillary and Bill Clinton’s (and team’s) constant lying and covering up. That’s the far bigger sickness. The CBC has no idea what other health issues (or other issues) she’s lying about or covering up. The CBC just takes it on faith that there’s nothing else, in spite of evidence of his and her past lying and covering up as a chronic problem.

The CBC knows they’re wrong on the very premise of this thing. And the really sick thing is that they know they’re wrong and go with it anyway, to try to infect you, the reader.

So here we have the state-owned media actually stepping up to protect liberals with a joke of an analysis — and put down her political opposition. Sounds un-Canadian to me — more like North Korean. But that’s just my analysis, and it wasn’t paid for with tax dollars so take it with plenty of water on an empty stomach.

Among the 43 U.S. president who they discovered through their exhaustive analysis to be just the same as Hillary Clinton are these six (yes six): Reagan, Kennedy, Cleveland, Wilson, Lincoln, and Washington.  No that’s it’s not “always,” but if you expect a fair “analysis” from the CBC on a political matter, you gotta be kidding.