Seriously: let the Left-Wing Coalition of the Socialists play their hand

As I insinuated yesterday in my last couple of cheeky (left butt-cheek) Newsquips, I beg that the Left in Canada join forces, become one, united against the Conservative Party, and posit their scurrilous political ambitions before the Canadian electorate (assuming — generously— they still care about such tawdry matters as electorates). 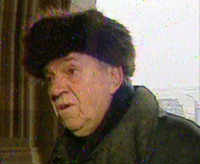 Socialist former leader of Canada’s NDP, Ed Broadbent, November 28 2008, as he meets with Liberal Party leaders of yore to conspire against the elected government of Canada, and take power.

Put that detailed economic “government rescue” plan of yours before the people, I say.  By the way, not to be picky, but where is that detailed plan?  The three socialist parties—Liberals, NDP, and Bloc—have yet to actually present one other than the usual buffet of warmed-over, limp platitudes and specious, greasy talking points, Barack Obama-style.  But I’m sure the plan is hidden somewhere under their Ed Broadbent – Soviet-style bear hats!

As a united coalition of the willing at war against not America-hating terrorists but something they actually detest—prudent stable center-right (with emphasis on the center) government in a democratic peaceful and economically calm nation in a time of calamity on many fronts —they will be united not just against the Conservative Party they so ideologically dread—hate!—but against freedom, and against regular Canadians, and against the Canadian way.

This, by the way, they call “progressive”.  And “enlightened”.  And “democratic”.  And “sane”.  And by the way, they also presume by all of this that they so “get” Canada and Canadians—and that they unique possess that ability.  It’s in their DNA as the “natural governing party(ies)”!  So as we can see, it’s really rather delusional and therefore pathetic.

This all would spell the end of—if not Canada itself as we know it—then at least the Liberal-Left, as we know it, for a decade or more—perhaps 50 years.  And this is a good thing.  It would take that long for the rest of us to restore even a semblance of balance in the public service, in the Senate, in the courts, in the culture now ingrained in our countless public institutions of which there are far too many, in our nations’ very credo, back to the point where Canada was an increasingly strong, moral country, full of fighters, entrepreneurs, adventurers, people with a sense of personal responsibility, and ever stronger traditional families and family values.

They on the Left may not see this in their zeal to take power, but this is the outcome which is also hiding—with those grand and oh-so noble “government rescue plans”—under their Soviet bear hats.  But there is no matter so inconsequential as “public favor” and “the power of the people” to those who so disregard earned outcomes after having been afforded a God-given equal opportunity.  So I doubt they’ll even bother to take their hats off and look.  It’s now settling into winter in Canada.  It’s good in a way.

So bring it on.  Go for it.  If the Canadian people are on side, the Left will get an early indication simply by virtue of the cash Canadians send them to aid in their wretched campaign for power by any means.  This precept of freedom and democracy—the freedom to vote and/or to freely aid therein with one’s own after-tax dollars—is one of the virtues of free market capitalism, coincidentally enough.

Previous article
Stop the human-rights censors
Next article
What’s in the water at Carleton University?