Our friend and junk-science debunker Steve Milloy spots a great example of the hypocrisy of the environmentalist industry in action.

World Wildlife Fund: The hypocrisy that keeps on giving

We received the following invitation from the World Wildlife Fund to “Celebrate the Bounty of the Bering Sea… Before It’s Too Late” — with the latter part of the invite referring to the much-dreaded climate change. 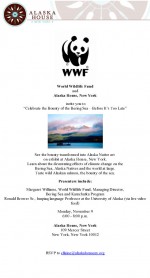 And just how did the WWF “celebrate the bounty of the Bering Sea”? By eating it, of course. As the invitation states, “Taste wild Alaskan salmon, the bounty of the sea.” So for the salmon on the menu, it was already too late. But we digress…

None of the above — they were, of course, flown by airplane.

According to Alaska Airlines, it flies about 750,000 pounds of Alaskan salmon annually to diners from San Francisco to Manhattan.

How green is this?

And to think that it was only about a year ago that we broke the “Five Star Green Hypocrisy” story involving the WWF’s $65,000-per-person, 25-day private luxury jet tour of the world’s most exotic locales.

The WWF and its elitist supporters may think — or may want you to think — that the world is coming to an end because of carbon dioxide, but they plan on savoring every emission they can while denying yours.

It reminds me of the David Suzuki luxury diesel bus tour in which he laments (wink!) —in his “educational” (wink!) and “environmental” (wink!) travels across Canada — the spewing of CO2… not by him, but only by us plebeians.