Remember when PayPal cut off PTBC and kept all our money? Now a Class Action Lawsuit has been filed. 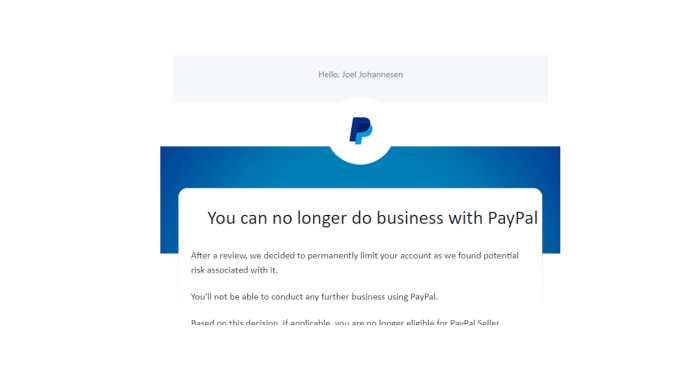 I assumed at the time that PayPal cut off my access to PTBC’s PayPal PayPal account as a political matter. I was being quite reasonable in thinking so, I thought, even though I’m not a “member” of Q-Anon or whatever, and don’t subscribe to conspiracy theories as a general matter (OK just one: Hillary Clinton is a “Russian asset”). After all, there is no end of anecdotal as well as real, actual evidence of conservatives and conservative sites and platforms being demonetized, shut down completely, stymied in some way, or censored one way or another. Lawsuits have been filed. Apologies have been made. It’s real! Don’t be a “denier!”

Here’s a reminder in case you don’t want to click and read my whole sad missive again: After a PayPal relationship of at least 20 years, I suddenly, and for no apparent reason, received a number of terse Dear Joel emails from PayPal telling me my PTBC account was immediately and completely cut off, full stop. No more contributions could be accepted from deplorables like you. They added that I would also NOT be able to access the money I already had in my account — its balance — yes that’s right, they would just go ahead and keep PTBC’s money! This is also known as the money that the likes of YOU already send to PTBC! (We dropped Google ads long ago, see, and we have no ads, see? And now we also don’t use PayPal!)

No explanation was given whatsoever, no number to call to resolve the matter, no nothing. Here’s one of the emails, which you’ll be forgiven for thinking reads like it was written either by a robot programmed by a North Korean dictator, or just a complete asshole (click to see larger if you need to): 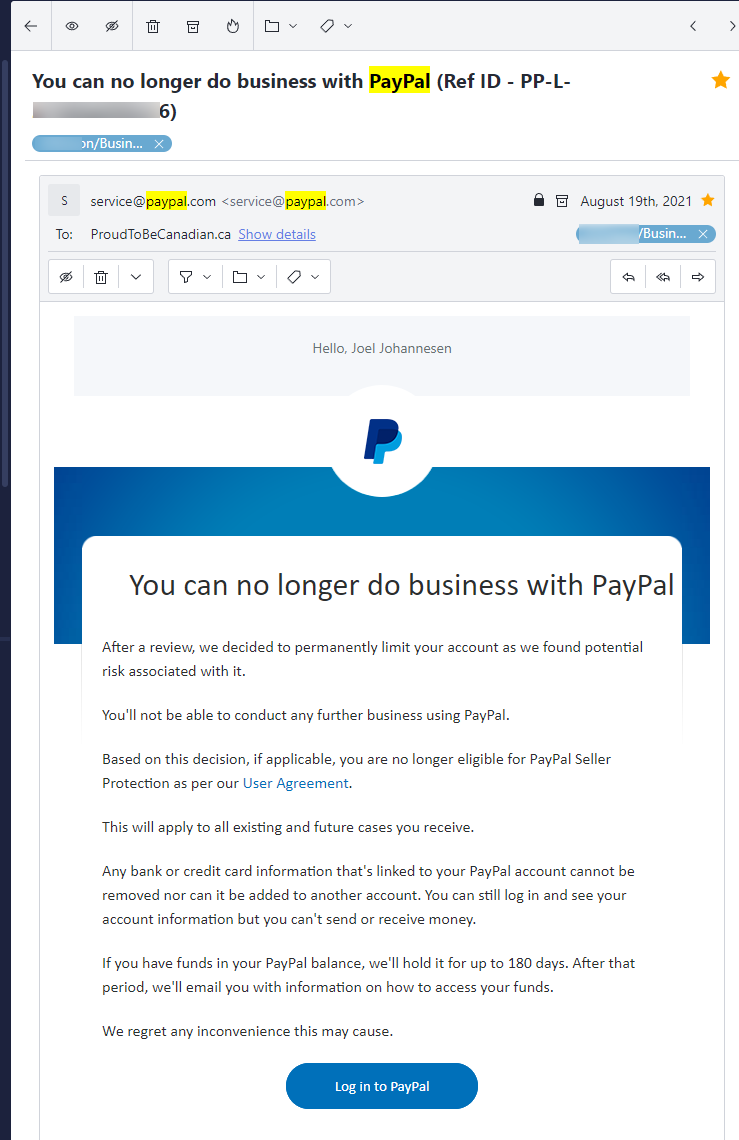 However, a new Class Action lawsuit out of California points me to a more generalized notion that PayPal simply doesn’t know what the frick it’s doing, and that the twenty-something wokesters who are running it (OK sure, that’s merely my fanciful vision of who is running it, and I have no science to back me up here), and who are sending out the notices that I got, are simply in need of adult supervision (preferably an adult who isn’t a member of the woke cult, because I actually love science, tech, free enterprise, capitalism, and America too, and PayPal is a good concept).

Thanks to PTBC contributor Joe, who formerly contributed to PTBC regularly via PayPal, but since we abandoned PayPal — or rather vice versa, they abandoned us — now does it using our much better STRIPE payment system instead (which is great because now we can actually get the money he sends!), alerted me to this Class Action (and here’s another story). A small number of people are a part of this legal action, so far, and they have stories matching mine to a tee. But — a big but — those people are in disparate — and notably non-political and certainly non-conservative — businesses and industries.

So my new read of the situation is that while conservatives like me and PTBC may indeed have been targeted — a theory which I base on evidence of such things happening to me and others in the past and continuing to this day — it is also possible that generally, PayPal has lost good control at least over its accounts and customer relations. This is all just my lowly opinion, but it seems to have been taken over by robots possibly made in China or North Korea, or by what the nerds call “artificial intelligence,” or as I call it, artificial intelligence hahahahaha (I also call artificial intelligence “progressives”). And by those ever-so ingenious “algorithms” (no, liberals, algorithms aren’t some new sex move, or a new gender identity). Or more likely, by a bunch of rote woke zombie pronouned twenty-somethings, as I described earlier.

Either way, the case is filed. The case is Evans v. PayPal Inc., 5:22-cv-248, U.S. District Court, Northern District of California. I imagine the next step is to try to get the court to force PayPal to provide to the plaintiffs with a list of those who got one of those PayPal emails and suffered from a loss of time and frustration and from stress, as I did.

NOTE: I was able to resolve the matter after pushing, hard, and spending a lot of time on it. I eventually got access to my balance, and of course, I got my money the hell outta there (I mercifully never had a large balance in the account). It took well over a month of back and forth over emails and the phone. And I was really stressed over it, yes. Shouting was involved. Staplers were thrown. Extra whiskey was consumed. Conclusion: I no longer use PayPal for PTBC contributions because I can’t risk PayPal assuming control of my money and income again, and causing the level of disruption to my life that they did. I also can’t take much more PTBC stress. Not to try to elicit sad faces, but it’s hard enough, folks. 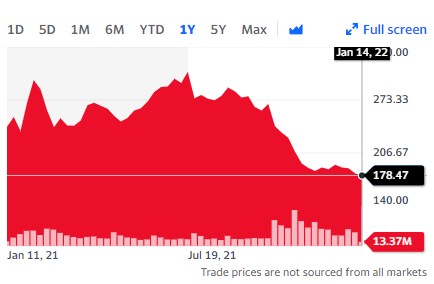