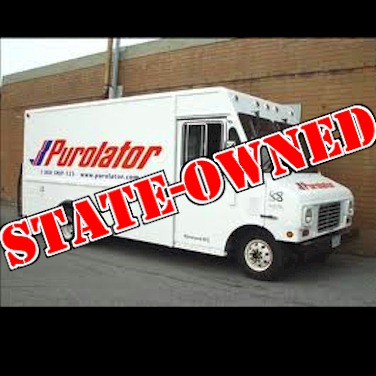 Do you know the true extend of state-ownership of businesses which compete against citizens?

Who knew Purolator Couriers Ltd was 91% owned by the 100% state-owned Canada Post “Corporation?”

If you didn’t know, that’s horrible. But what’s just about as bad is the idea that it’s intentional. Progressive governments, socialists, liberals – progressives as a general matter  —  have a long record of meddling in and then purposely blurring the lines of “corporate” Canada, with even more success here than they have in the United States.  Countless “corporations”  are really divisions of government disguised as “corporations”.  They all have their web pages, their “corporate” logos which look every bit as slick and commercial as real corporations, they all have “CEOs” and so on.

All 100% state-owned.  And others are so massively controlled by and are subject to so many rules and regulations and policies set forth by all-encompassing governments, and/or are so reliant upon “grants” and “loans” and “loan guarantees” and “stimulus” (–wink!) and “bailout” cash, they might as well be and really are effectively “owned” by the state.  But that’s another tangent.

You don’t have to look far to see how it’s working.  I once cited the example of an outraged British Columbia citizen who felt he was being ripped off, and so he sued the “corporation” which was the object of his ire.  “It’s about keeping corporations honest, that’s really what it’s about,” he was quoted in the newspaper as saying (without even a question about this malapropism from the paper’s reporter).  Oh I see.  It’s about keeping the “corporation” honest.  The “corporation” he’s speaking of?  The BC Lottery “Corporation.”  Another score for honest government  –  and progressives.

Purolator, like many other such “corporations” (–wink!) cast themselves as just another regular business

just out there competing fairly in the plain old free marketplace.   But this one is 91% owned by a 100% state-owned division of the government.  And a monopoly (regular envelope mail delivery) at that.  And now, after investing millions and millions into a parcel delivery “company,” Purolator is the biggest parcel delivery “company” in the country.  They’ve squashed all their competition.  Too bad their competition turns out to be citizens using their own cash, trying to make a go of it for themselves and their families.  And I mean all kinds of citizens  — those who have started with nothing and managed to form large businesses, and all the way down in size to lone, one-car parcel or even one-bike delivery folks who live in and work from your own neighborhood.  Oh well.  The ends justify the means in the mindset of the folks who propagate this sort of phenomenon.

What is the rationale for this?  Who knows.  Well actually I know.  PROGRESSIVES.  This is Fabian socialism at work.  Progressivism.   And the end justifies the means.

What’s wrong with that?  Plenty.  Here’s what’s wrong with that:  Purolator competes against citizen-owned business in this country, using what is ultimately taxpayer cash.  That’s an abhorrent abrogation of free market capitalism, an affront to freedom generally, and it’s pernicious to the precepts of democracy itself  –  all core principles upon which this country was built.

And here’s another thing that’s wrong with that:  It’s not an isolated, nor even a diminishing phenomenon.  It’s yet one more example of this, like the one I constantly bring up about the 100% state-owned and taxpayer-funded CBC, wherein government actually competes against TV and radio stations and networks owned by citizens.  Or to put it more saliently, it’s another example of the government competing against its own citizens in business for profits. In the case of the CBC, it’s far more, and far worse, than just competing against citizens for mere profits as if that weren’t bad enough.  CBC competes in the forum of ideas and politics.  It’s a progressives’ dream come true, but it’s sabotaging our freedoms and democracy.

But even within that example flows another similar one:

Did you know that the 100% state-owned CBC owns 40% of what we all perceive to be the privately-owned the Sirrius Satellite Radio business in Canada?  It’s true.  Why?  Well let’s be clear once again.  It’s not freedom-lovers and free-market capitalists doing this.  It’s progressives.  And progressivism has no exit strategy.  It’s an ongoing effort.

Throughout the period of Purolator’s state-ownership, tens of millions of dollars have been invested in Purolator to expand, over and over again, to the point where, as I said, it is now Canada’s biggest courier “company.”  From their own “History” page at the Purolator web site:

And liberals are against Wal-Mart opening in their communities?

Let’s not be fooled by the slight of hand and the blurring of lines, which, it seems to me, is intentional and intentionally secretive.  These “companies” are a division of the government.

Yet their own Purolator “About” page doesn’t even mention that it’s 91% owned by the state.  You have to dig into their “History” page (as if regular folks would) to find this out.  Or maybe just connect the dots when reviewing half of the members of their Board of Directors:

And don’t think it’s just plain citizens who have been fooled by this blurring of the lines.  Others have been co-opted and their eyes also fail to see the line of distinction between government, and citizens in the marketplace (willfully or otherwise).  Let’s look at how the National Post, which as I’ve mentioned in my writing before is in contractual cahoots with the 100% state-owned CBC to share news and advertising assets, bestows honors on what is essentially another government “corporation.”  Again from Purolator’s  “History” page:

That National Post is often seen as Canada’s most business-friendly and “conservative”-friendly newspaper.  Bollocks.

And I wonder what the unions think of this:

Golly that’s shocking.  Hey I wonder which political parties the unions have aided and abetted over the years in every way, including funding them with millions in union members’ cash!

I’ve long said that state-owned media should be banned in this country, and furthermore, that notion should be enshrined in the constitution.  A U.S. Congressman recently introduced a bill which would effectively create a new U.S. constitutional amendment forbidding the U.S. government from owning any businesses.  That’s far more strident and all-encompassing, and it’s a far more sensible solution.  It’s an excellent idea, which should be supported there and in Canada.