This marks the 5th anniversary of my contract with Ann Coulter to post her weekly column here at PTBC.  We’re now going into the 6th year.  I understand ProudToBeCanadian is the only Canadian media that posts her weekly column—at least with a legal license to do so. 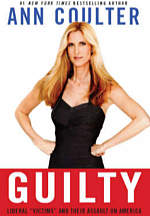 Her latest column starts by delving into the predictable media-created controversy already surrounding her latest book, GUILTY: Liberal “Victims” and Their Assault on America

, which was just released this past week.  It seems the NBC television network scammed her (as I see it) by booking her on their morning shows yesterday morning (months ago), then canceling at the last minute, citing some sort of an emergency “ban” on Ann Coulter for the rest of Earthly history, on the grounds that she’s a big fat meaniepants, especially to their Barack Obama and his fawning media, and their viewers don’t want to hear about mean things any more.  Maybe NBC didn’t want to soil the “Messiah’s Immaculate Inauguration”, as Rush Limbaugh said today on his show.

Turns out that after the Drudge Report reported it yesterday, NBC cowered under protest and changed their minds, claiming of course that Ann Coulter—and Matt Drudge—had made the whole thing up.  She did the show today.

Here’s a snippet from her latest column:

The claim that there’s no such thing as a left wing press is a patent lie said to enrage conservatives. Newspapers read like the press under Kim Jung Il, which, outside of a police state, looks foolish. The prose is straight out of The Daily Worker, full of triumphal rhetoric with implicit exclamation points. Still, their chanted slogans fill your brain, like one of those bad songs you can’t stop humming.

There is no other explanation for the embarrassing paeans to Obama’s “eloquence.” His speeches were a run-on string of embarrassing, sophomoric Hallmark card bromides. It seemed only a matter of time before Obama would slip and tell a crowd what a special Dad it had always been to him.

…Filled with the excitement of watching some leftist socialist Starbucks-Chapters employee sneer at me as I pay for my book I begin to plan my retail purchase. But then it dawns on me that … if we buy books through PTBC it help your site somehow…

May be a good idea to remind readers in big letters to buy her new book from the link at PTBC directly. I am going to do so right now. (As much as I’d like to annoy the counter person at Chapters.)

This should be her 7th New York Times best sellers.  She has sold over three million books.

Previous article
This is the downer we’ve been waiting for!
Next article
The Ten Big Lies About America