The state-run CBC pretends it’s all about Canadian programming and culture.  Why then does the official state movie reviewer, Jelena Adzic, use her weekend movie review in the middle of the state “news” on CBC Newsworld (Channel 390 on my dial with other CBC occupying many of the others against my will) to talk about American movies?

Jelena Adzic “On The Scene” (—the American scene).
Trying to compete with CTV’s “Entertainment Tonight – Canada”? 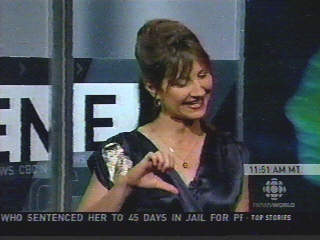 The other day, she went on at length about how the Canadian actors union were protesting against CTV and Global Television showing American shows in their prime time lineups instead of Canadian shows (notwithstanding the fact, which nobody mentioned, that that’s what Canadians want to watch). The union rep insinuated that Canadian broadcasters should be forced, by law, to spend their money producing Canadian shows, not unlike in North Korea or Iran.  After the segment, the “news” anchor, David Gray, even interviewed that union rep, and they talked at length about that American shows thing over at the private citizen-owned broadcasters.  At one point the “news” anchor told the union rep that she was “preaching to the converted over here at the CBC”.

Liberals and their CBC and their CTRC state censor and regulator division constantly yammer on and on about insisting that we as taxpayers (‘specially us rich ones rakin’ in over 58 THOUSAND dollars per annum!) and private sector broadcasters “fund” “Canadian content” since private investors are too smart for that —in fact there are actually laws and regulations to force private citizen-owned broadcasters to “fund” Canadian content, and force Canadian content and Canadian channels on Canadians since otherwise Canadians wouldn’t watch it—but here we have the state-run media pumping American movies for our Canadian weekend viewing.

Jelena Adzic “On The Scene” (—the American scene) 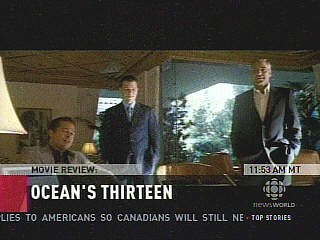 Aren’t there any Canadian movies that they should be pumping?

If there aren’t any, then maybe they should pump up Canadian TV shows like that terrific Corner Gas show on CTV, which is the only Canadian show to hit the top-30 shows on a regular basis.  Oh—they’re in competition with CTV?  That’s odd!  It’s state-run media!  What kind of government would compete against its own citizens for viewers and profits?!

OK then why not pump up Canadian web sites?  Once, CBC Newsworld did a segment about the Internet in which they called one of the most extreme left-wing (I dare say solidly Marxist and utterly heterophobic) web sites in North America—a Canadian web site called “Rabble.ca”—“among the best “blogs” in Canada; and it represents “a real pulse” in terms of how people are thinking across our country”.  (Actual quote. Seriously.  I have it on tape).  Ah—I guess the reason they don’t pump up ProudToBeCanadian.ca is once again that “competition” thing… against me and my wife in this case. They (both rabble and the CBC web site) have all those (left-wing) columnists, while we also have columnists, after all.  This ostensibly makes sense in the liberals’ Canada.  I remember failed Liberal leader Paul Martin always calling it “Our Canada”.  I guess this is what he meant.  I’m not a Canadian, I’m a conservative, if I understand liberals and their media correctly.

(For my part, I was only ever told by the state-run CBC lawyers that they “will be monitoring my web site”—seriously.  I have it in an email and in legal papers they’ve delivered to me at my home.)

Michael Moore’s latest agitprop lie-fest movie “documentary” is coming out this month, so I’ll stake my life on the fact that they’ll review the heck out of it “On The Scene” —totally favorably of course, not the least because it touts socialist healthcare in the U.S. (by using Cuba and Canada as examples of perfection—I kid you not).  After all, they’ve played and replayed his other documentaries at least a dozen times on the state-run CBC.  No, Michael Moore isn’t Canadian, but at least he hates America and is a good socialist.  And therein lay the keys I guess.  “Canadian content” means different things to different people.

P.S.
(Why is today’s “news” on CBC Newsworld dominated by what asses like failed punk rocker Bob Geldof and groovy permanently sun glassioed Bono think about Stephen Harper (hate him) and Canada (not living up to its global socialist progression formerly started by Chretien and Martin).  They even had their man in Germany, Keith Boag, provide a lengthy diatribe about the groovers and what they think.  They’ve played more on that part of the G-8 summit story than any other.  And those two rockers aren’t even remotely Canadian, while I am.)

Previous articlePTBC is “Canadian content”. CBC doesn’t care. They simply “monitor my site”.
Next articleParis Hilton circus passes circus on hiway… on way back to poky