Post Obama CBC: once again, the “bulbs are sprouting”!

I told you the CBC banners were going to change exactly now.  It’s no longer “Wretched Retail” or ECONOMIC BLUES” or “Dismal Outlook” or “GRIM OUTLOOK” or the likes of “We Implore You To Think The Worst, Pre-Obama and Ignatieff Election (or takeover by some means)”.

Now it suddenly “ROAD TO RECOVERY”.  See, it wasn’t before.  Now it is.  This “ROAD TO RECOVERY” banner this morning, on the occasion of a chat about the upcoming Canadian federal budget, and (what I think is) their simultaneous effort to set Canadians up for their appropriate liberal-left media-driven anti-Conservative disdain, ubiquitous whine, and general negative uproar when the Conservatives’ budget comes out next week. 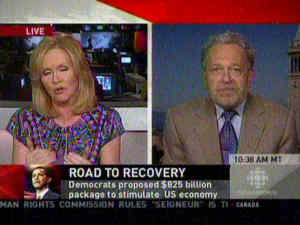 The socialism-reliant state-owned Canadian media informed Canadians this morning with the help of a left-wing Democratic Party has-been, Robert Reich, who touts more and more government “stimulus packages” and social programs and tax-the-“rich” schemes even when things are going swimmingly.

Robert Reich is the same one who was engaged by the Democratic Party-led Congress this month to advise them on how to spend a trillion taxpayer dollars on government “economic stimulus”, which included his (and fellow Democratic Party) demands that it NOT be spent hiring any “white men”.