Sadly, today’s winner hails from the same paper as my previous winner.  And in fact this one shared some blog space with my last winner, because she was the runner-up.  It’s Vancouver Sun columnist Barbara (Sarah Palin is “Bullwinkle Barbie!”) Yaffe.  And it starts with the very headline of her column.

Yes, I know.  Huh?  Is Yaffe referring to the “Tories” who are barely staying on the voter-preference radar in Canada even in the face of a confused “progressive” left cabal still fighting charges of fraud and outrageous scandal, while the Republicans are rising even without a leader?  Apparently she is.  Maybe she means to encourage the Republicans to follow the “Tory” lead to oblivion.  (And hey why not “GOP” rather than the apparently ever so hard to type long word, “Republican”, while we’re at it?).  Sadly for Yaffe, even fewer Americans read her columns than Canadians —in fact I’m guessing no Americans read them.

At first Yaffe very oddly claims in her column (reminder: it’s about Republicans and “Tories” learning from or teaching one another about how to fail, or something), that the Americans — in general — could learn tons from those well-known “Tories”… Jean Chretien and Paul Martin, who are of course both Liberals’ liberals to the rest of us (but never “Grits”).  To wit:

Americans might learn a lot, for example, by looking north to the Chretien government’s 1990s-era retrenchment in public sector spending.

The U.S. can both derive inspiration and take hard lessons from Paul Martin’s hell-or-high-water budgeting as they prepare to confront the challenge of unsustainable deficits and skyrocketing debt.

Yaffe then advances some pretty odd ideas of hers.  Odd manifestly because they’re patently wrong.

But back to the Republican party, which appears to be tanking even as support for Democratic President Barack Obama has moderated from a high after last November’s election.

While there’s more scope these days to criticize Obama’s spending and overextended agenda, the Republican party is not making gains.

The only thing that’s “tanking” is Barack Obama’s poll numbers.  There might be eight polls which say the exact opposite of what Yaffe wrote today.  And this at a time when the Republicans don’t even have a clear leader. And after Obama was literally raised to God-like status and maintained there as best his sycophantic liberal media could, and the Republicans were literally driven into “war criminal” status by the same folks.

Support for Republican congressional candidates has reached its highest level in over two years as the GOP lengthens its lead over Democrats in the latest edition of the Generic Ballot.

A new Rasmussen Reports national telephone survey shows that 42% would vote for their district’s Republican congressional candidate while 38% would opt for the Democratic candidate.

And here’s the latest Gallup poll in case she’s the one journalist left on Earth who doesn’t read Rasmussen’s Reports. 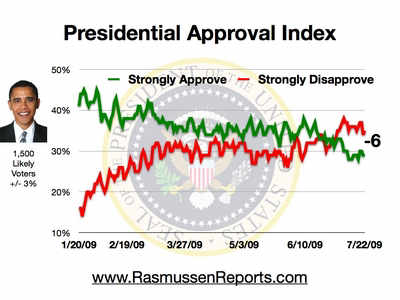 But then, as with all liberal media, Yaffe once again shows how she can’t help but dismissively refer to Sarah Palin at every opportunity.  Yaffe does this as her penultimate conclusion:  ‘Until Republicans get their ducks in a row, it appears that the party will be dominated by cheating husbands and an unpredictable Alaskan.”  At least Yaffe refrained from calling the “unpredictable Alaskan” “Bullwinkle Barbie” this time.

Meanwhile, as this poll result shows, despite the suck-up media that Yaffe and her associates at Club Liberal Media offer to Barack Obama, and the incessant bashing from the likes of Yaffe herself (did I mention she calls her “Bullwinkle Barbie”?), Sarah Palin could very well beat Barack Obama in an election today, as this poll shows, in addition to the fact that another bully-pulpit-deficient potential leader, Mitt Romney, is in a dead heat with the sacred to all media (and President) Barack Obama. 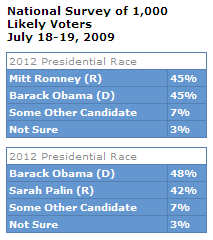 Yet “…the Republican party, which appears to be tanking…”.  Sorry. Who’s “tanking”?  And who could learn what from whom?  Minimally, you’ve learned what total bunk is, in case you didn’t already know.

Our Ann Coulter, and Sean Hannity on Fox News Channel, actually explain these things much better than Barbara Yaffe.  And it’s neither bunk, nor mind-numbingly boring.

EXTRA:
I pointed out here that recent poll results indicate a sort of innate sense Americans have when it comes to spotting pure bunk on the media horizon. 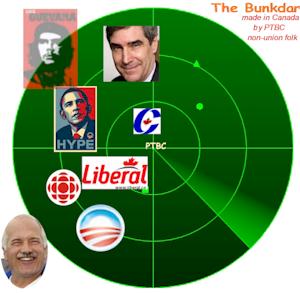 Considering that this result comes after a years-long slobbering love affair with Barack Obama by the liberal media and academia and Hollywood, and what could only be described as pure hate and intolerance and sputtering rage and historic levels of putrid and deceitful vitriol against Sarah Palin, it says a lot about the resilience of Americans to pure bunkum.

It’s as if many Americans have a “bunkdar”.

I might have to include Yaffe in my Bunkdar in future updates.

Previous articleTake Two Aspirin And Call Me When Your Cancer is Stage 4
Next articleYou Aren’t Bipolar, You’re Just a Jerk!