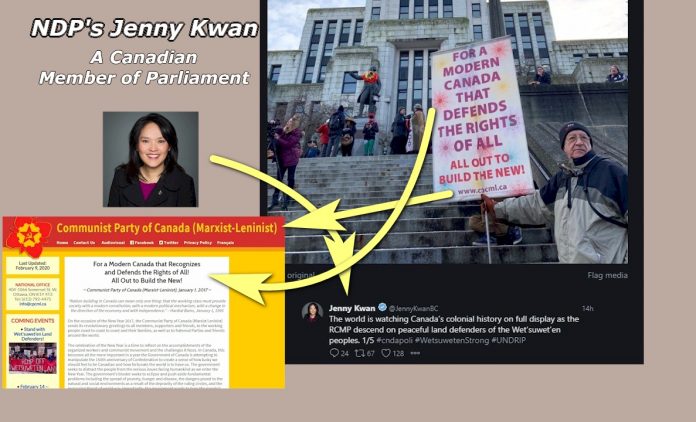 Who are these people protesting and those who are supporting the protesters blockading the construction of a natural gas pipeline in BC? I found hints in a couple of places: two small-town BC newspaper articles, and the NDP’s Jenny Kwan:

“… The Red Braid Alliance for Decolonial Socialism, who started the Deltaport [Deltaport is the largest container terminal in Canada —ed.] protest, confirmed the receipt of the injunction on its Twitter feed Sunday night. …”

“… The Red Braid Alliance for Decolonial Socialism, who started the Deltaport protest on Saturday night, said they held the Deltaport blockade for nearly 40 hours. …”

I didn’t read much about this group in the establishment news media even though they do have the information, so they are obviously tamping down the socialism connection in this erstwhile indigenous protest as best they can. They don’t want to tarnish socialism. It would be counterproductive.

The Red Braid Alliance for Decolonial Socialism used to be called Alliance Against Displacement according to their Twitter account. So important is socialism to their cause that they made it part of their name. They are supportive of some indigenous people (apparently not those who support the gas pipeline), but they really just seem to me to be a militant socialist front group.

They are “for worlds without capitalism” according to their revolutionary website. (Worlds is in plural. So, they mean not just Canada, but planets in our Milky Way galaxy and beyond. Very ambitious.)

They aim to “take power away from capitalists,” and engage in “fights that undermine state and capitalist power, developing the independent power needed to overthrow the economic and political system of capitalism,” using tactics that include “direct action,” among other such threatening-sounding revolutionary communist terms.

And don’t worry, “Against colonial and capitalist patriarchal hegemony, we fight for women, trans, two-spirit, and gender non-conforming people to thrive in a world that honours multiple genders and kinship relations.” So sexy.

A pamphlet is offered (PDF) via their “newspaper” website (thevolcano.org) which speaks to shoplifting and break and enter robberies and sundry other crime to support themselves, in addition to getting rid of all the police. And security guards. So, total mayhem.

Here’s a cute graphic from that same Volcano “newspaper”:

Also it should be noted, “We think of Red Braid as an inheritor of all revolutionary anti-colonial, anti-capitalist, and anti-imperialist experiences and projects of the past, including struggles for Indigenous sovereignty, national liberation from imperialism and colonialism, and a wide range of socialist, communist, anarchist, and feminist experiments.”

Those quotes all originate from among the vast left-wing communist revolutionary word-salad presented at their website. There’s more. You look! Encourage your MP to look. And those media hacks. Maybe also tip the police!

But then quite apart from that garbage, I came across a tweet posted last night by the extreme leftist Jenny Kwan, a current Canadian NDP member of parliament from Vancouver-East. She (if I may use the pronoun she) tweeted some similar-sounding banality along with a picture she selected which features protesters from… the Communist Party of Canada. They’re holding a sign with their li’l Marxist message. 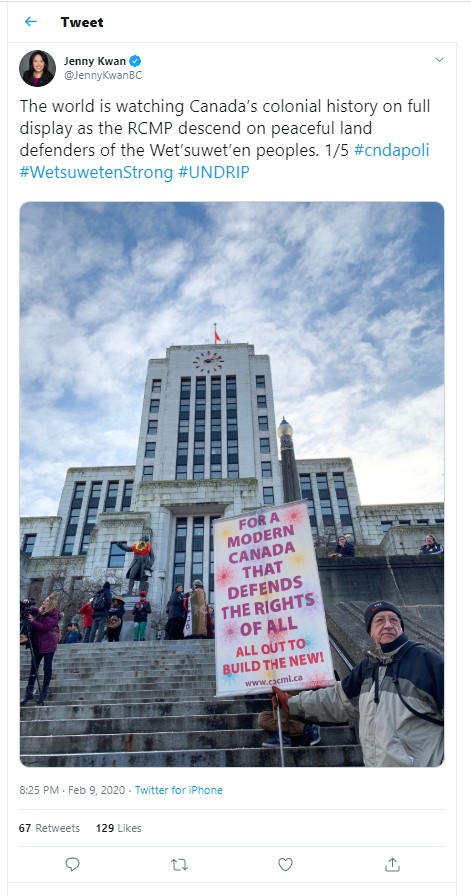 Maybe she forgot that as an MP she was sworn to uphold the laws of Canada (“the oath to the Queen is in fact an oath to a domestic institution that represents egalitarian governance and the rule of law“), and made an oopsie in dissing the federal RCMP in its efforts at upholding the law. Maybe it wasn’t on purpose. Maybe it was late (8:25 PM according to the timestamp) so Kwan just didn’t do any due diligence whatsoever, and she didn’t notice the clue to the fact that those folks are full-on Marxist Communists: it’s the very visible text (www.cpcml.ca) at the bottom of their sign which links to the Communist Party of Canada website that gives it away. CPCML stands for Communist Party of Canada (Marxist-Leninist). The linked page is currently headlined with the very words on that protest sign she liked so much.

Maybe she’ll delete the tweet. Or maybe she knew exactly what she was doing. The tweet is still there 18 hours later.

So yeah I have questions. Who is actually behind this protest? Who is using this gas pipeline as cover to help them build up a socialist/communist revolution and literally overthrow Canada as we know it? And does the NDP’s Jenny Kwan support lawlessness? Is she a closet communist? She certainly seems to support them — at least in this cause. How about other members of the NDP? Do they support lawlessness, and the revolution for socialism and/or communism for Canada and the world (and other worlds)?

Finally, where’s the big political story about how the NDP is obviously a house divided — massively — over this issue. BC’s Premier is the NDP’s John Horgan, who very much supports this very same pipeline — and the rule of law. No story here either?