Home BC Blockade of left-wing protesters at BC Legislature blocks… left-wingers. 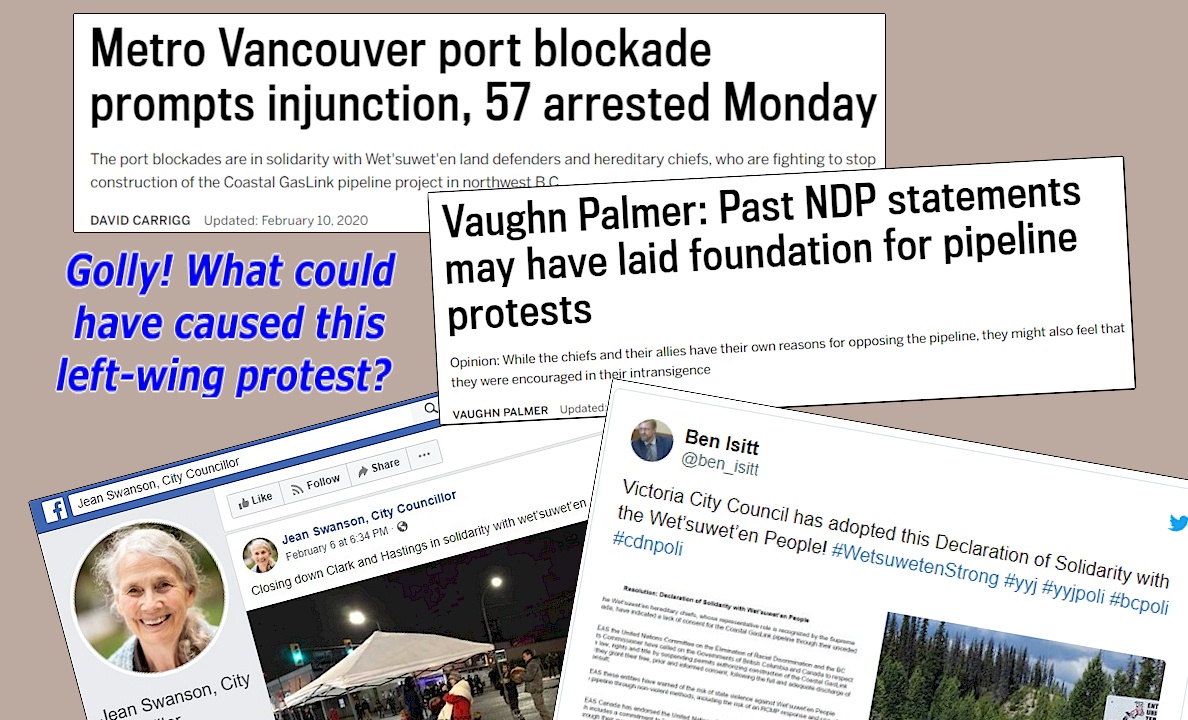 In addition to the real story itself which is a left-wing protest once again standing athwart economic progress, in a normal universe, this would be pretty big political news because it’s really all political, and it’s all of the left. It’s left-on-left warfare. It’s a story about the left self-destroying, it’s about its hypocritical left-wing talking points, poor left-wing policy or lack thereof, growing left-wing divisions within the left-wing clan, severe NDP division, and so much more.

Alas we do not live in such a fair news media universe. We live in a universe chronicled by itself — the left. And they’re all a part of all of this today.

Those in charge of the BC government, the left-wing BC NDP — who inarguably sided with the indigenous gas line protesters before they were elected (and some like left-wing extremist NDP MP Jenny Kwan still still do side with them) — are now having to do battle with what are really just like-minded left-wing socialists and radical anti-capitalists and “anti-white-power” activists (etc.). Today the left is being blockaded by other left-wingers — goons in this case. The NDP members of the legislature and media can’t get in. It’s not a mere peaceful protest, it’s a blockade. Against itself.

Those who were refused passage into the Legislature to hear today’s NDP throne speech (postponed until later because of this blockade, snicker) and its start to the spring legislative session included not just the NDP members of the legislature (snicker snicker), but their trusty news media reporters (snicker snicker guffaw). Imagine their surprise. We’re one of you! they might have said to the leftist blockaders and anti-capitalists (etc) to utterly no avail possibly because they are on the same team.

Many fun live-action videos are appearing on Twitter today. And it’s really all about the left. In this first video we see the president of the news media’s legislature press gallery contingent, which is itself but another spoke in the perpetually-spinning left-wing wheel, being denied passage by the lefter-wing mob. Usually they nuzzle. They nearly wrestled.

The President of the British Columbia legislature press gallery, Global’s Richard Zussman, tries to enter the BC Legislature as protestors opposing RCMP presence in Wet’suwet’en block all doors of the building. pic.twitter.com/0KAfLcyKT9

Aside from the NDP’s supportive goading of the mob before they were elected, plus plenty of similar such goading from the Trudeau Liberals over the years, and that from the NDP’s own Jenny Kwan currently, as mentioned, the protesters are also at least partly animated by an earlier (January) decision by yet another decidedly left-wing entity, the city of Victoria’s ardently left-wing city council and one of their extremely left-wing councillors. Together they voted in a “Declaration of Solidarity with the Wet’suwet’en People,” and tweeted about it proudly.

How do you think Victoria law enforcement is going to react after being told by their masters that they support not the rule of law, but the Wet’suwet’en protesters? (Hint: they acted like mob-rule traffic announcers this morning on Twitter, blasting out the latest places to avoid today in Victoria due to the mob rule.)  The NDP-controlled legislature security guards obviously suffer a similar conflict, which may explain their failure to even remotely control the left-wing mob today — a mob which thus succeeded in preventing the entry of many legislators and media into the legislature, despite some gallant efforts.

Vancouver suffers the same fate obviously, as was easily predictable after getting kisses from extreme-leftist Vancouver councillors like (but not limited to) Jean Swanson, a member of the “COPE” coalition party (Wikipedia: “…activists from the British Columbia New Democratic Party and the Communist Party of British Columbia…”), shown here celebrating the blockades on Facebook: 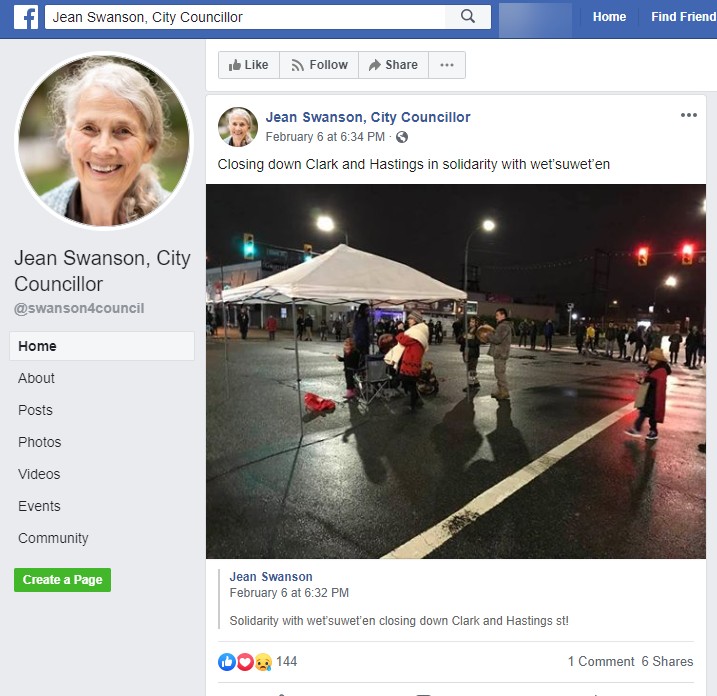 It’s just a whole lot of left-on-left action today folks! It would be funnier if it weren’t so serious. It’s mostly a massive negative for everybody, not just the innocent normals —the citizens who are trying to get on with their work and live their lives and support their families, often with evil fascist natural gas-powered furnaces —but even for the radical extreme leftists who brought it all on themselves and on the rest of us normals.

But make no mistake: this is not on you. This chaos is all on them. The left. Which is why you won’t read any words to that effect in the ever-so objective news media.