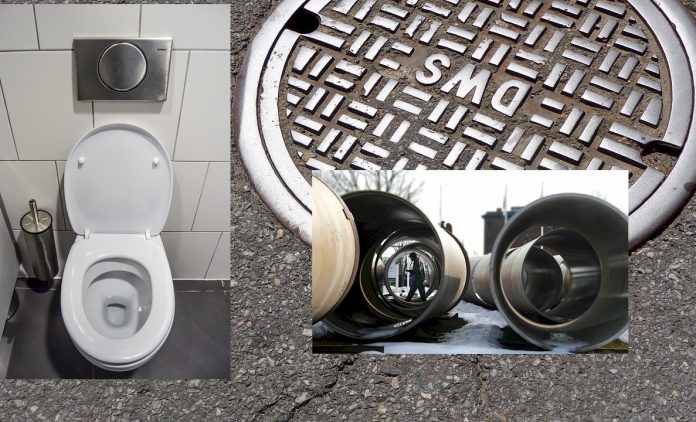 Sounds like everyone who relies on pipelines (which is literally everyone, even the holier-than-thou enviro alarmists) have another big problem on their hands today. But not because oil has anything to do with it.

In fact, our know-it-all betters who normally can’t wait to rush up to a microphone or TV camera to scold us about fossil fuels and climate change and man-made global warming and wag their finger at us instructing us about taking the bus to Costco instead of driving, were all absent. That’s because the pipeline that burst was not carrying oil, but rather their own shit.

Apparently they’re totally cool with pipelines that carry their own shit. Even when they burst, and they increasingly burst because they’re so old and aren’t being replaced and maintained properly. You know, the way they demand oil companies do at a cost so high it multiplies the price of our fuel. They’re even cool with the shit being pumped into a beautiful nearby fish-bearing creek rather than being carried away to a safe toxic disposal or biological hazard site. Nope, no rules about saving “even one fish” here, folks, because the enviros are full of it, and by “it,” I don’t mean “truth.”

This is the story, brief as it was reported, about yet another city — government — pipeline burst. It happens all the time — it’s just that they’re rarely if ever reported. Pipelines are under us all over the map — gas, water, oil, electricity, but also huge sewer pipelines carrying toxic, hazardous human waste. But get a load of how gently this sewer pipeline burst is reported and dealt with in a small local paper:

Approximately 30,000 litres of sewage poured into Hastings Creek late Friday night following the breach of an underground pipe near Ross and Allan roads.

Raw sewage was bubbling up on the street when district workers arrived on the scene at about 2 a.m. – likely within an hour of the rupture – according to District of North Vancouver utilities manager Shaun Carroll. Given the district’s policy of prioritizing people and property, crews directed the surfacing sewage into Hastings Creek.

Wow. No compunction about piping raw sewage into a fish-bearing creek? Yeah don’t worry, experts are on it, as you can see from this unwittingly hilarious bit:

While segments of the river were noticeably grey, no fish were killed, according to Carroll.

That assessment was corroborated by Pacific Streamkeepers Federation co-founder ZoAnn Morten, who surveyed the stream Sunday afternoon. However, while Morten didn’t find any signs of dead fish, she was troubled not to see any fish at all.

“I would have expected to see something. I didn’t,” she said, noting fish populations are generally “quite prolific” along the creek.

So there’s no “body,” as they say in the dumbest crime dramas on TV, “and therefore there’s no crime,” right?

In an oil or gas leak, of any kind, and of any size — and that includes a spill of even just one liter of oil, to say nothing of the 30,000 as in this case — a Royal Commission would be called, massive class-action lawsuits would be filed (by enviro groups and even cities!), several regulatory bodies would be involved, aboriginal bands would barricade or otherwise protest in some near-militant way, the media would be reporting about it (unevenly) for days or weeks or months, and tender enviro heads would be exploding. Justin Trudeau would offer an apology to the fish, and he’d offer lots of money via Twitter to various groups who vote Liberal. “You good with that? Let’s do it!”

We know this because it happens every time. But just not when it’s their own shit.

But that’s not the end of the criticism that we can dump here. How about maybe a reporter question why 50-year-old sewer pipes (in this case, 55 years old — seriously) are rotting under our homes and streets and parks and schools, ready to burst, and, as in this case, spew shit all around us? Are oil pipelines allowed to be 50 years old? No. Have our governments misspent our taxpayer cash to such an extent that they don’t even have enough left over for basic infrastructure maintenance? They’re spending money on so many things that they have no business getting involved in at all — and now they now have nothing left to maintain sewers properly? What in the world has happened to all that cash we’ve forked over, if it was not spent to maintain our very most basic human civic needs? Have governments failed, yet again, to perform their very most basic task we’ve assigned to them?

Why yes they have. By the shitload.

Morten is hopeful the incident will underscore the need to speed up the replacement of old pipes.

“Our infrastructure is aging and failing, and I think that this was a bit of a wake-up call,” she said.

This is a two-fer story of hypocrisy and government failure as a result of incessant progressive expansion into areas governments have no business being in, leaving inadequate funds and time and manpower to cover the basics of civilized life and the few responsibilities we have actually given government. But — and this is important — what’s the common thread in these two shitty problems? It’s liberals. The left, generally. Progressives.

BONUS EXTRA
Here’s a hint about what I mean: this photo is one I’m using in an upcoming article. Why is the government of Canada (A) advertising at a curling event, or even advertising at all whatsoever?; and (B) paying taxpayer cash to sponsor what is a totally commercial sports event?

Previous article
Canada loses 7,200 jobs in March; USA gains 196,000
Next article
Is the BC NDP government in the business of getting its citizens high on drugs?