The state-run media in Canada (and the citizen-owned media who do their best to compete with them) all lament, daily (with intra-day lament updates, all day long), the price of a barrel of oil, and the resulting price of gas.  (Of course they don’t have the foggiest clue what they’re talking about, but they pretend they do.)

Even as I was writing this, the state-owned CBC did a story about the latest rise in gas prices.

Apparently it’s getting higher.  You can tell because they constantly, alarmingly update you about this almost as often as they update the Canadian and American troop death toll in Afghanistan.

OK.  We get it.  Well actually, not all of us get it totally.  The state-owned CBC Newsworld channel is taking to reading out emails their concerned viewers are sending in today, unwittingly revealing the intelligence level of CBC viewers.  The CBC seems to imply in their delivery—and I admit this is just a guess and is not as scientific as their U.N. “man-made global warming” climate change “science” —that the government should do something about this.  Not them at the CBC (as if they aren’t a branch of the government) —and horror of horrors, not us personally—the government.  (They’re liberals, and that’s how all liberals think).  One CBC viewer writes in and suggests there should be a “cap” on gas prices.  Yes, an artificial, non-free market, government price control, in other words —you know, like in communist countries or dictatorships.

Another CBC-viewing genius writes to them:

“I am a resident of Toronto.  Every summer, for the past 15 years, I visit one new province by driving to it.  I love to see all of this beautiful country.  But with the gas prices it will not be possible.  What a shame!”

Reality flies right over the viewer’s head, apparently.  Perhaps the CBC should do a 5-part series on “getting a clue”.  (Oh what am I saying… this is the network that understands the law of supply and demand about as well as Jack Layton does.  The free market has nothing to do with the CBC, it has hardly any viewers, and yet it still gets over a BILLION dollars of taxpayer funding every year anyway, socialist style, and demands more, to needlessly compete against private citizens.  The only “cap” should be on the CBC grave.)

And then there’s a little perspective.  They keep calling it “record highs” but adjusted for inflation, oil only just very recently rose to a level that was higher than the year 1979.  All this time, the price was lower than it was in 1979.  So the liberals’ media may want to get a small mental grip.  Maybe even present the proper perspective.  (Nah!  Too radical!) 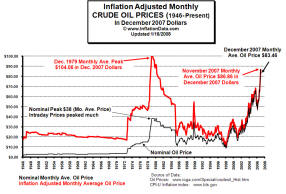 The liberal-left and their media selectively focuses our attention on what they perceive as free-market capitalist negatives, particularly when conservatives (or anything resembling conservatives) are in power.  Those of us in the sober, clear-thinking smart set see this is part of the hidden agenda of the liberal-left and their media.  They all discredit and misrepresent anything free-market capitalist-related, but practically declare news festivals whenever any government announces a yummy new universal social program or another increase in taxpayer spending on any “public service” of any kind.  No matter what it is (except national defence)—it’s all good if it’s an increase in government spending.  When a socialist politician or one of their 900 allied special interest groups holds a “news conference” announcing his or her demand for a new social program, or increased spending on one of the eight billion existing ones, or promises its own state spending programs if elected, the media is all over it, wall-to-wall, with great enthusiasm.

But how come the media never reported on and announced with great flourish the constant increase in personal and corporate income taxes over the years?  And obviously—at least to me and other conservatives—they totally “forget” to constantly update us on any of the myriad increases in social ills which are all the direct result of liberal-left secular-“progressives” such as: the rising number of abortions daily; the rising number of divorces daily; the “progress” in the number of sex-laced, salacious, violent, and foul-mouthed “entertainment” on TV and in movie theaters; the huge rise in sexually-transmitted diseases in our children; the huge rise in the number of fatherless “families”…

All these years, the liberal-left media totally forget to report that the Dow Jones Industrial Average has also gone up—in fact much more reliably than the price of oil.  They hardly ever mention that.

I don’t know why

.  They never fail to mention when the stock market dips a little as it has recently— the state-owned news media (CBC Newsworld channel 390) even placed what I dubbed a stock market “plunge-o-meter” on their screen all day long one day when the market was falling one day.  But they failed to report on the almost constant, new historic rises, to new record levels, as has happened in the stock markets throughout history. How come they never had any of those CBC banners on the screen like those above, reading “STOCKS UP AGAIN!”, and “STOCKS AND AND UP AND UP…”?

Canada’s liberals and those on the further left shun capitalism.  They hate it.  Hate corporate profits, hate capitalist success, and hate capitalists.  (At least once they’re done with it). 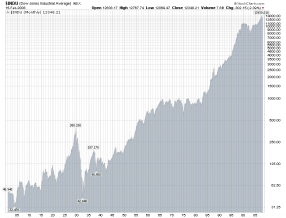 That stock market free-market capitalist fact is very important —perhaps more so than the price of oil, because so far, and despite the left’s admiration for socialist Cuba and its “progressive” Hell, there’s actually no sound, proven alternative to free-market capitalism on the horizon; and because we all totally rely on it; and because we have all greatly benefited from it to the extent that we’re among the richest most bountiful countries on earth.  There are replacements for oil now and on the horizon (thanks again to free-market capitalism!).  So really, they should be more excited and concerned about the Dow Jones Industrial Average and its constantly rising value, than just the rising price of oil alone, with its rather negative connotations.  Yet they aren’t.

Canadians should learn from that fact.

CBC Newsworld’s banner on their business report segment this morning:

Previous article
Left-wing Toronto Star to lay off 160. CBC, Liberals and NDP bracing for torrent of job apps?
Next article
CBC: It’s a “bungle”! No it’s a “blunder”! Hang on: it’s a “gaffe”!