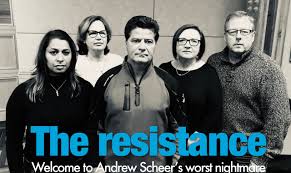 Don't know how journos covering #cdnpoli signing a statement dissociates themselves from Unifor, when their union dues are contributing to this… https://t.co/w5DTK54dHK #cdnpoli

Political observer Norman Spector is outing the UNIFOR labor union on Twitter today, for their crass politicking in the face of the fact that they represent Canadian journalists.

He’s on about the fact that a few dozen journalists seem to have tried to separate themselves somewhat, today, from their union, at least insofar as the union’s overt partisan politics. They made quite a spiel about it, one of them tweeting about their open letter with this graphic:

The letter is very clear. Many journalists signed it. It reads in part:

…We have been watching with growing concern as the president of Unifor, Jerry Dias, has led a very public campaign against the leader of the federal opposition, Andrew Scheer, and his Conservative Party. When the head of Unifor speaks, many of our readers assume that his words reflect the views of his members, including media workers. Attacks aimed at any political party, leader or candidate can introduce doubt among readers about bias and the independence of journalists…

And concludes (and the bolding is theirs):

Mr. Dias says that he and the national union office will carry on with an “aggressive campaign” to warn Canadian voters about the Conservatives’ “anti-worker” platform ahead of election day. As journalists first and foremost, we would like to make this point clear: On matters of partisan politics, Jerry Dias and Unifor do not speak for us.

Strong points. The point I think Mr. Spector is making is stronger still: they can sign a letter all they want, but it’s their own union dues that pay for all this bias and partisan politicking. And they vote for their own leader, and their own union’s policies. Etc. This is on them. Completely.

So: The words sound pretty, but —if I understand Mr. Spector correctly.

The journalists won’t go so far as to indicate a desire to stop paying their dues (not that they could stop, given Canadian laws as pertains union dues). And they won’t indicate any desire to quit the union (again, Canadian laws protect unions in this way). And I never heard anything about them pleading with the union bosses to change course before this obviously long-planned adventure in politics started happening. Yeah it’s only just now — September 20, 2019 — now that the election is over in a month, and the union’s ad buys are are long past being a done deal, that they are forced to express their sudden indignation.

The amounts that the journalists’ union UNIFOR is spending this election is staggering. According the the Globe and Mail (many of its reporters having signed the letter):

By far the largest third-party group has been the labour union Unifor, which spent about $900,000 between June 30 and when the campaign began last Wednesday – just shy of the limit of $1,023,400. Now that the campaign has begun, Unifor has already spent another $366,000 and plans to hit the limit of $511,700 on a series of ads attacking the Conservatives and Leader Andrew Scheer.

Corporate and union donations are banned from donating directly to candidates and political parties. So Dias and the journalist union UNIFOR gets around that barrier by campaigning AGAINST the Conservative Party and leader Andrew Scheer, as the only viable non-left-wing or outright socialist party and leader. Like, it’s the most politicking they could get away with. And don’t be fooled by their rhetoric. Conservatives stand right up for working people. Many of us are those people. So stop the “anti-worker” idiocy.

Diaz’s claims it’s also about getting even with all that corporate money, with which he claims the system is “awash.” Corporate donations are illegal, so I don’t think it’s really that “awash.” There are cogent arguments that can be made about the propriety of third-party political donations (which come from both sides of the political spectrum, make no mistake) in light of the ban of union and corporate donations. But to argue that getting even is what is at stake here, is a totally false premise.

The salient point is that in this unique, particular case, UNIFOR, it’s all about the fact that this union represents journalists, who are supposed to be seen as objective and favoring no side — nor being one side’s “worst nightmare.” The point is further strengthened by the fact that one political party — the Liberals — has promised to give federal sponsorship money, taxpayer cash, to certain news media, some represented by UNIFOR, while the Conservatives have rightly rejected that policy. And in addition, there’s this apparent rejection of the union’s actions by so many journalists who, let us be charitable, may have only just come to realize the perfidy of all of this at this late date. Their journalistic credibility — or that which still remains after ruining so much of it themselves — is literally at stake, as they have stated. And that makes UNIFOR’s actions just wrong, and counter-productive at the very least. Obviously.

I find the journalists’ plea to be too little too late, and a little weak. Besides, as if to prove the point, you won’t read about this pretty serious political campaign funding brouhaha anywhere, or see it on any TV news.