Newsflash for government regarding Canadian life: it’s not about you, actually. 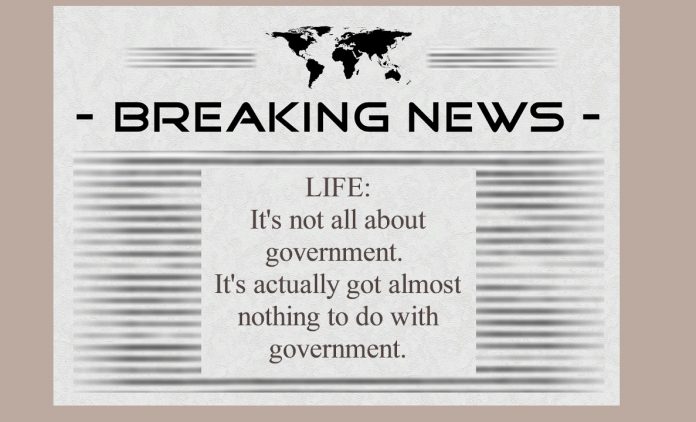 Headlines like this from the Globe and Mail today make me want to throw something:

What in hell’s name does government have to do with a couple of privately-owned sports teams and their big-game rivalry? Absolutely sweet F all. That’s the best part of sports and any other personal, family, recreational, or entertainment pursuit, in any citizen’s private life — this lack of government crap. But increasingly we see this weird fetish amongst governments and politicians to inject themselves into absolutely everything in our lives. In what country is government so involved in our family and personal lives that we need to hear from them or even defer to them in matters of sports and our leisure and recreational activities? Not ours.

I see this sort of crap in our local paper at every seasonal festivity or event — sports or otherwise: like a quarter-page ad by my local politician wishing everybody a safe and happy Hallowe’en. I’m pretty sure if he or she didn’t wish/advise that, we would not be in peril, and Hallowe’en would carry on just fine. It’s as if he or she feels, as our benevolent government nanny, it isn’t really happening unless they endorse it, and if it is, it might not be safe unless they advise us. We’re too stupid to live without them.

Can’t the government leave private citizens and their leisure activities alone? Do they think they need to inject their self-esteemed advice and well-wishes and authority and self-perceived smarts into every bloody thing in order to legitimize it and make it real?

And do the media really need to seek out their opinion on these things and make enormous headlines out of it? It implies that they think government’s opinions on these things are important to our lives — or even remotely interesting. They are not. Quite the opposite.

The fact that the media think government is so damned important to every single aspect of our private lives including even our recreation, is telling, though. It does tend to show, if we didn’t know it already, how out of touch both politicians and the news media both have become as institutions; and moreover how large and overbearing and domineering government has become.

Those in government certainly think they are the be-all — particularly those of the leftist persuasion. They demonstrably think we’re too stupid or even utterly incapable of living without them, their myriad “supports,” their controls, their redistribution to those they would prefer have your money, their rules, regulations, and oversight of our lives. They have come to think they actually need to tell us how to live, what to eat, how to think, even how to raise our families — and they would do it for you if they thought they could, because they think they would do it better than you.

Personally I don’t want to hear one single thing from any politician about, well, most anything, but certainly nothing whatsoever about non-governmental affairs of the citizenry — which is or should be 99% of our lives — and especially their opinions or super-fun participation in our very private-sector-y entertainment pursuits. It — life — is actually not about government. This is not North Korea. At all. It should be quite the opposite.

So they should learn to shut the hell up. Stay out of our lives.

In a free country, government shouldn’t dominate our lives in the way that it increasingly is. It shouldn’t be top-of-mind for journalists either. They should all get a grip on real life.

Previous articleMexicans fly to Canada, then ditch Canada for the USA.
Next articleLike “chickadees sneering at an eagle” — our self-esteemed, preening betters, who discard gems like Don Cherry