and the niqab banned in public

Even though the Liberals and the even more socialist You’ve Got To Be Kidding party are bent on being so, Canadians are actually surrender monkeys no more. Canada seems to have mostly, finally, shaken free of that sad era of effete neo-liberalism and its abject pacifism; and have shunned the left’s incessant failure to match the commitment of our enemies, and fight to maintain our own beliefs, whatever it takes, for however long it takes.

…An Ipsos Reid poll released on Monday suggested that two in three Canadians support an extension of the military mission. The poll, conducted for Global News between March 16 and March 19…
– Globe & Mail

Just what level of evil would be required for the left to rise to the occasion and defend Canada and its values, and to do its part as a member of the free world to battle a threat to our freedom and a global menace, is an open question. We don’t have the answer,

because since it must be an evil even greater than the current Islamist terrorism threat, nobody can even imagine that kind of evil. Therefore we are forced to suspect that they will do utterly nothing, ever, under any circumstances. Well, that is unless the menace starts smoking, or emitting carbon, or worse, starts talkin’ all Jesus ‘n stuff.

In the interest of transparency, and since we pay their wages, and since it’s an election year, and it is our country and our lives, after all, I do think the opposition leftists owe us a clear, detailed description of exactly what kind of evil would whip up their desire to defend our nation and its interests and deploy our defense forces militarily, and as an “exit strategy,” to do so “until we win.” Failure to do so would conjure up suspicions of a “hidden agenda,” and if I understand the Left and their news media division correctly, they’re dead set against that. 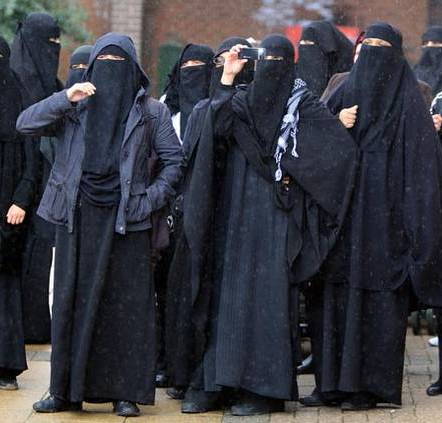 …The Leger poll, for the Association for Canadian Studies, indicates 70% of respondents agree with Prime Minister Stephen Harper’s strong view against wearing the niqab while taking the oath to become Canadian.

“It’s very easy to understand,” Harper told the House last week. “Why would Canadians, contrary to our own values, embrace a practice at that time (of gaining citizenship) that is not transparent, that is not open and, frankly, is rooted in a culture that is anti-women?”

Canadians agreed with the prime minister 70%, according to the Leger poll taken Tuesday to Thursday.

And 60% of the 1,711 respondents went even further, agreeing “the niqab should be banned in public spaces (i.e government offices and courts).”

It’s almost as if Harper has a finger on the pulse of the nation. And the nation has a pulse. And both Harper and the nation want to maintain a pulse.

Not so the opposition Left. The opposition create false dilemmas and fatuous claims about their desire to offer humanitarian aid instead of defending Canada militarily, as if Canadians can’t walk and chew gum at the same time. This tweet by the PM, following the motion to extend the anti-ISIS mission in the House today, beclowns the left and their specious, milquetoast political posturing:

We do not need to choose between fighting ISIL and helping its victims. We will continue to do both. #cdnpolipic.twitter.com/1DOgjgydhh

“We will continue” as long as the Conservatives remain in power. If they don’t, everything – everything – is up in the air.