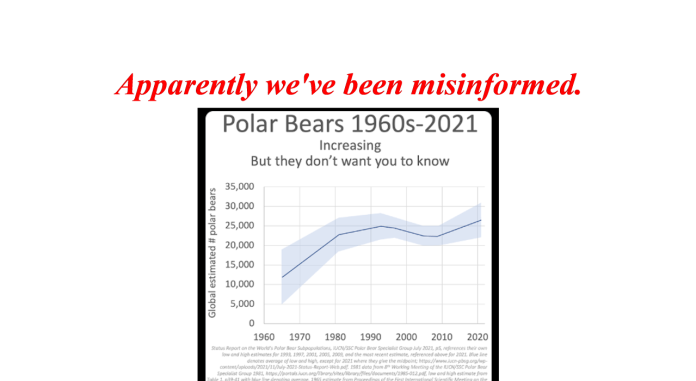 How’s that climate change emergency crisis narrative going? Not nearly as well since Musk started freeing Twitter, such that making claims that the Big Government and The Establishment don’t like won’t get you canceled anymore for spreading so-called “Misinformation.”

Here’s some actual information. Censoring this sort of thing, as they did before, is of course the actual misinformation.

Even though the “news” media has been warning you (just before they “quit Twitter”) that Twitter, post-Musk, is literally going to ruin, well, life itself, there’s more information at hand. For example, as you may know by now, I’m a fan of Michael Shellenberger. He’s saying all sorts of true things right out there in the open almost as if he’s living in a free country. What a jerk! He’s presenting facts. Science. Exposing data — which he’s studied, even! He’s spreading information — all without being banned by Twitter (although I’m afraid in Canada he (and Bjorn Lomborg) may well be charged with some sort of “hate crime against humanity” by Trudeau Minions like the CRTC or Trudeau’s special cabinet “Misinformation Secretariat” or whatever form of state police they conjure up if their Bill C-11 passes). 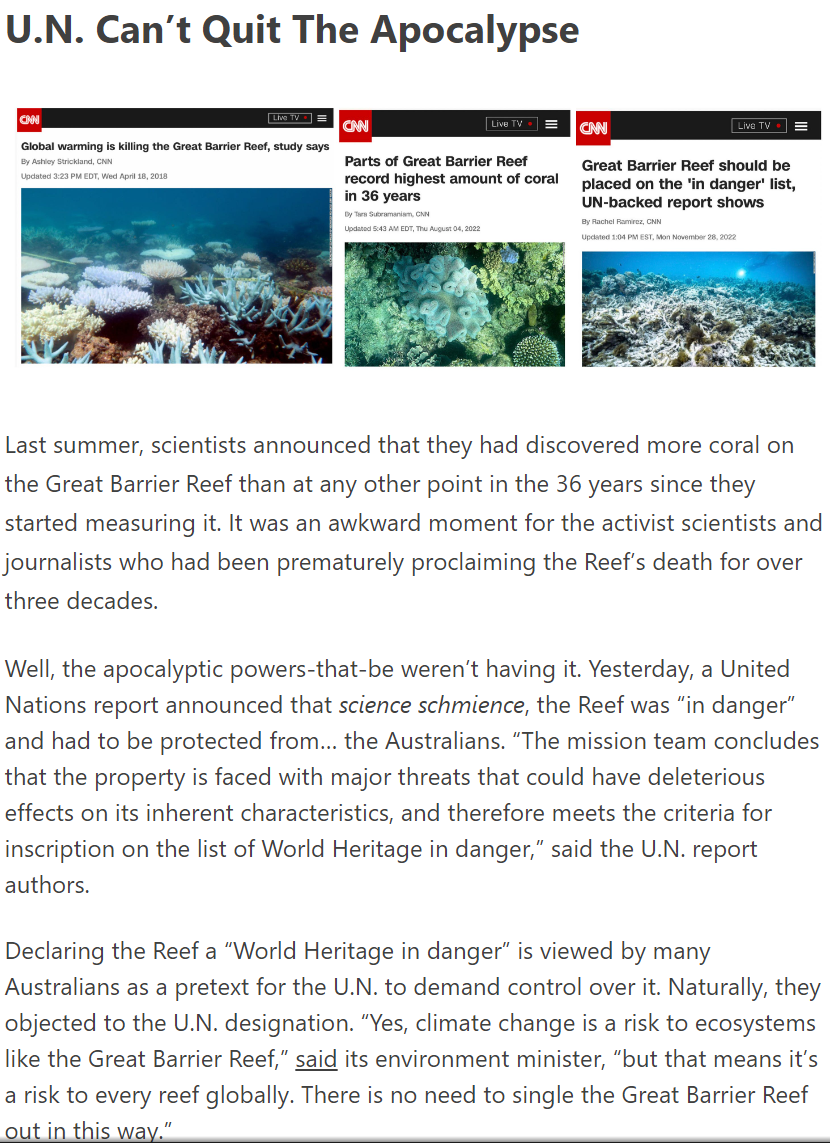 We’ve heard a lot in Justin Trudeau’s adoring “news” media these past few days about Canada signing onto a new supposedly “tough on China” policy (the “Indo-Pacific strategy”). International affairs tracker Terry Glavin (subscribe to his Substack unless you enjoy being stupid) has err…. doubts. Here’s a taste from today’s:

…We’re supposed to be impressed by the Trudeau government’s “U-turn” on China, but I don’t see it. The main readout from Melanie Joly on Sunday was 1,321 words long, and China wasn’t mentioned once. There’s been much talk about tough talk, about Trudeau calling China a “disruptive power” and so on, as if we all didn’t know that already.

It’s [sic] sounds tough, the talk about bolstering our military presence in the region, for instance, but that seems to consist mainly of redeploying a single frigate from the Atlantic to the Pacific.

Here’s what I think it’s mostly about.

As recently as this past spring, U.S. president Joe Biden’s administration and a dozen American allies kicked off the Indo-Pacific Economic Framework for Prosperity (IPEF), and Canada wasn’t even invited. That’s how seriously Canada is taken in the region. So some rebranding was necessary.

I’m going to be spending a lot of time on all this for my column but I have to say, right now, as far as I can see what’s really happening is the Trudeau government is trying to redeem itself in the eyes of the Pacific world after having spent the last seven years serving as Xi Jinping’s bitch in the G7…

BIV (Business In Vancouver) is on it as well (“it” being rectifying some of the misinformation that has been spread by those we were supposed to trust with our country): 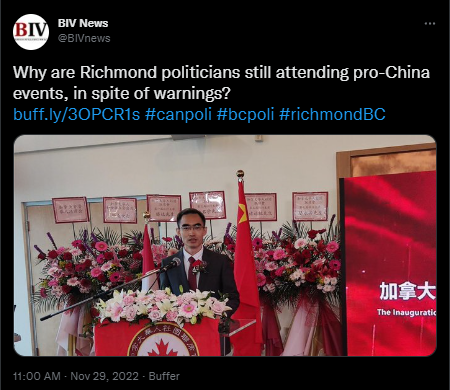 According to their writeup, this event occurred on November 22. This would be the very same week the abovementioned “tough on China” policy went into the Trudeau news-churning ‘n narrative machine. Like two or three days before. After they’d obviously discussed it in the cabinet room.

…The event was the inauguration ceremony of the 9th executive team of CACA, a Richmond-based umbrella for more than 100 business and cultural groups whose website states that it is in [sic] active participant in Overseas Chinese Affairs Office (OCAO) activities. OCAO is an arm of the CCP’s United Front program. A 2019 report from the National Security and Intelligence Committee of Parliamentarians warned that one of the United Front’s aims is to influence foreign politicians to adopt pro-China positions…

They’re being nice. CCP’s United Front program is a direct global influence-peddling arm of the Chinese Communist Party. (And if I know this and Liberal MPs and city councilors don’t, our country is truly f-ed.) This is what Liberal MP Parm Bains and Richmond Coun. Alexa Loo decided to attend, even while Melanie Joly was preparing the big reveal of the Trudeau Libs’ “tough” new policy. Which is obviously a fake policy. Another virtue signal. Performative, like 99% of this Liberal government. 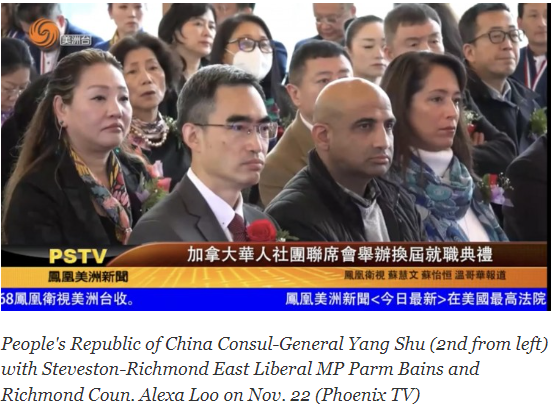 Prior to her recent re-election, Loo joined Yang outside the Vancouver Art Gallery at a culture festival on Oct. 1, to celebrate the 73rd anniversary of CCP [Chinese Communist Party] rule in China.

All those liberals and leftists who are ever so fearful of “misinformation” now that Musk has opened Twitter up to free speech, seem to be perfectly OK with this dude being on Twitter all this time. They want to ban the Babylon Bee, but the murderous Supreme Leader of Iran is peachy. They are so sensible. 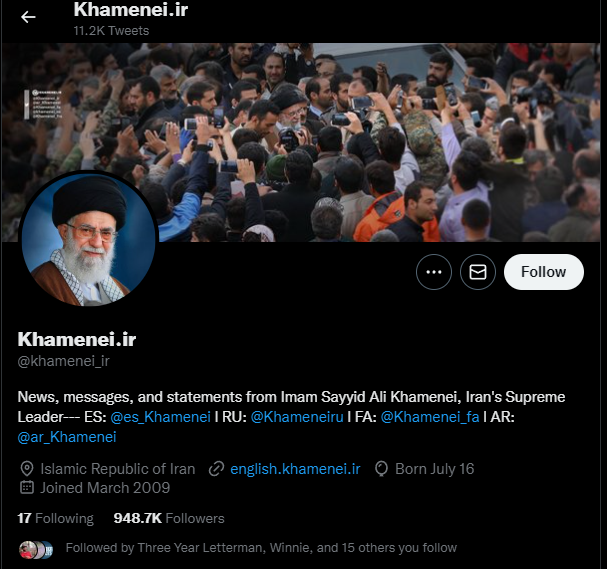 I don’t follow him but yes, I did notice he’s followed by 17 people I follow! I guess they’re just stupid and have become mesmerized by his misinformation. They’re in a trance! They really need the government to save them, possibly by offering them their beloved “MAID” service. Anyway, meantime, and speaking of things I don’t follow because they’re stupid, USA beat Iran in soccer today, in Qatar (Iran, soccer, Qatar — what’s not to like?). An American player named Christian scored the only goal in the game (— soccer, lol). That’s just gotta lead to some angry tweets full of misinformation from the Iranian crank. (And silence from the blue-check hall monitors.)

Filed under Slippery Slope in the folder marked I Told You So:

Global News (whose best reporter Sam Cooper having just revealed some very Trudeau butt-hurting information about Trudeau’s beloved Chinese Communist Party interfering in our elections according to CSIS), has demanded that the Trudeau Liberal government give them subsidy cash to help pay the wages of their reporters and journalists, because why not? It’s Canada! States paying journalists is so, so normal in a free and democratic country. Did you not know that?

Hush money? No, of course not, but it’s fun timing, huh? Global just seems to think it’s not fair that all the other non-TV “news” outfits are getting subsidized by the government when they aren’t. It’s about “equity,” y’all! Fairzies! Everyone should get paid by the government! It’s Canada! 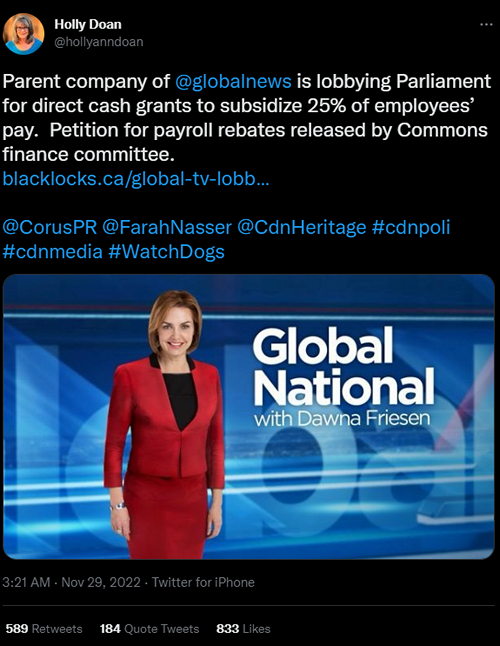 And finally (for now anyway) — still in the Slipper Slope file and the subfile folder I Told You So… I present the state-owned CBC, folks: 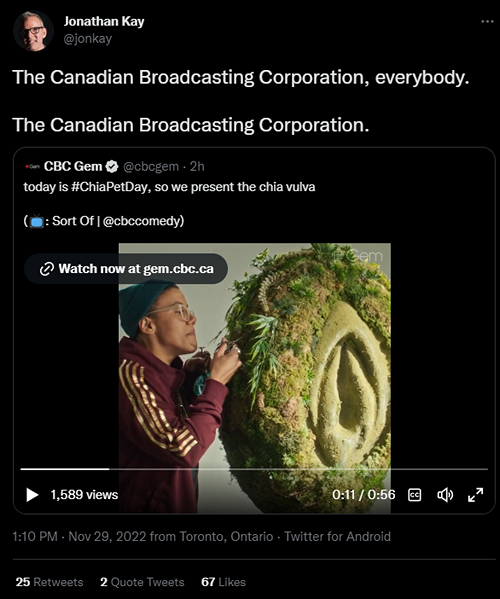 Previous article
Hot Tip: Our tanks are Leopard tanks. But some think of them as Laurentian Elite tanks
Next article
Election interference is all around us | 选举干扰无处不在 | Retweet if you agree, ironically.