Here’s the recap of the big story:

My wife has a job which requires her to have a good car, and she gets a car allowance to buy a car.  So we’d been shopping for the past weeks abiding by these critical criteria:

1. The car must NOT be built by the Canadian Auto Workers Union (CAW), because its leadership, and possibly its members, apparently hate “right-wingers” and “the corporate agenda” folks, whom union boss Ken Lewenza has blamed for the global recession, even while demanding my tax dollars to bail him and his overpaid union workers out.  And quite clearly, they very actively politically support Layton’s you’ve got to be kidding party with their massive amounts of union cash and their physical and moral and every other kind of support, and of course that literally works against most everything I stand for as a free-market capitalist Canadian taxpayer with a sensible conservative social outlook and world view (and of course my love of the “corporate agenda”).

2.  The car must NOT be built by General Motors or Chrysler, since they have caved in to the non-free-market capitalist mindset of the liberal-left, and have asked for and received corporate welfare and bailout cash from the state.

So, since I personally had a desire to buy American because that would support their and by extension our economy, that left Ford, since they have accepted no government bailouts.

After much due diligence and time, we chose the Ford Escape—built in Kansas City.  They have a hybrid model which we tried to justify buying and actually test-drove, but it was too expensive, so ours is a regular gas engine.  Ours is “silver” with charcoal black interior. 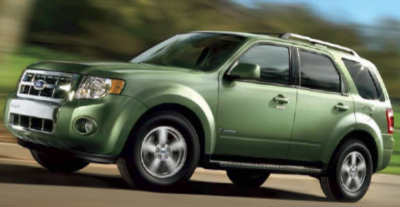 Now if we could just find someone interested in buying a nice 1994 Mazda MX-6 Mystère that needs valve work….

UPDATE:
After massive government bailout cash which we were told would “save” them, you know, the way the government “saves” everything, Chrysler will file for bankruptcy today.  Coincidentally, sensible conservatives like me said this is what should happen — last year sometime — before the government started meddling and “saving” them and bailing them out with countless billions in taxpayer cash.

… And even while announcing the bankruptcy, President Obama is announcing even more government meddling and taxpayer cash and intrusion into the free capitalist market —even telling Americans that he and his government will be the repairman of last resort.  They will save your car.  Thank God the government.